Climate change is a global issue that impacts the sustainability of society, and it is closely related to water and resource recycling issues. Engaging in global environmental conservation is essential for achieving Our Purpose. The Fujitsu Group does its utmost to reduce environmental impact and minimize risks throughout the value chain, and we contribute to the realization of a sustainable society by solving environmental issues together with our customers. 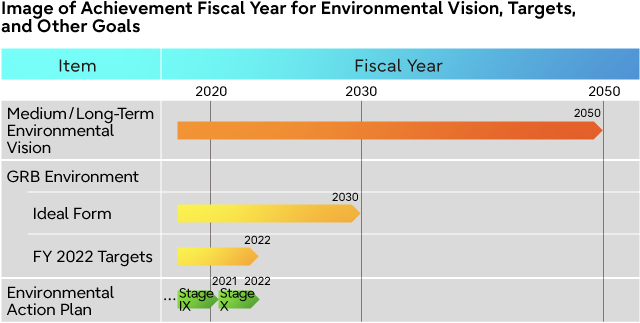 To Reduce GHG Emissions in Accordance With 1.5℃ Target

In May 2017, the Fujitsu Group formulated the FUJITSU Climate and Energy Vision as our medium- to long-term environmental vision. In August 2017, we acquired SBT certification (2℃-aligned) for our reduction standard by 2030. As the movement toward carbon neutrality accelerated, we reconsidered the role that the Fujitsu Group must fulfill, and in April 2021 we raised our GHG emissions reduction target for 2030 from a 33% reduction compared to FY 2013 to a 71.4% reduction. This reduction target has been certified as 1.5℃-aligned by SBTi. In June 2022, we submitted a commitment letter to the SBT Initiative towards the Net-Zero targets and it was received. 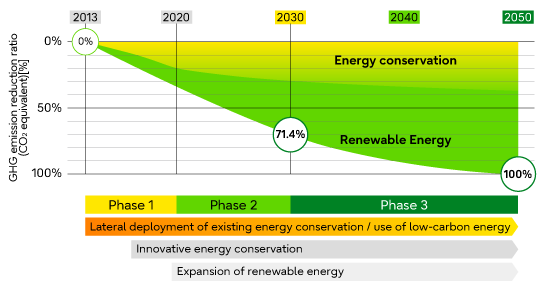 Roadmap to 2050 for achieving our own zero CO2 emissions 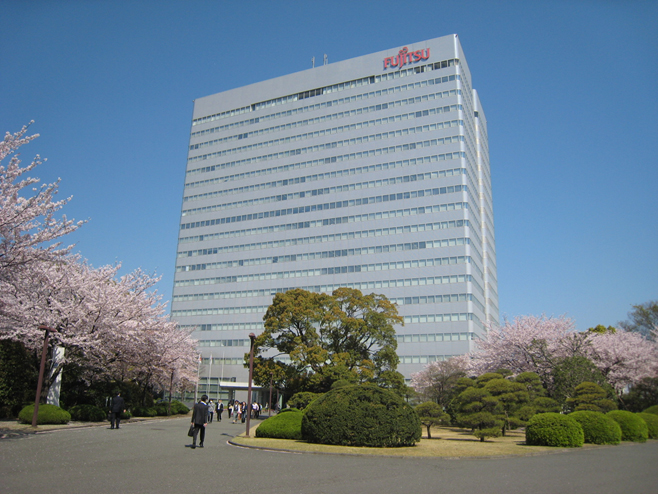 The Fujitsu Group conducts flooding damage impact assessments for each business site according to the level of business impact using hazard maps and implements countermeasures. We determine whether each business site falls within the "estimated flood inundation area (planned scale: once every 10–100 years or assumed maximum scale: once every 1,000 years)" for nearby rivers as established by the Ministry of Land, Infrastructure, Transport and Tourism or prefectural governments. We also assess what the impact will be on-site and off-site, and whether there will be an impact from water ingress in buildings, etc. We then use a four-point scale to rank the business sites with a high level of impact. For sites that correspond with the most hazardous level, we assign a four and then take various measures to reduce risk, such as protecting the site perimeter with retaining walls and watertight panels. 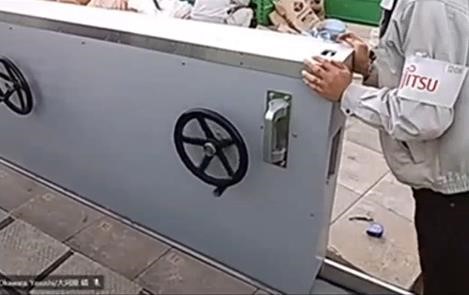 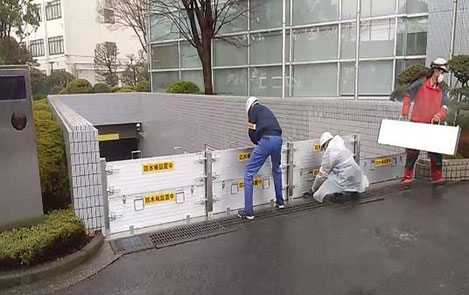 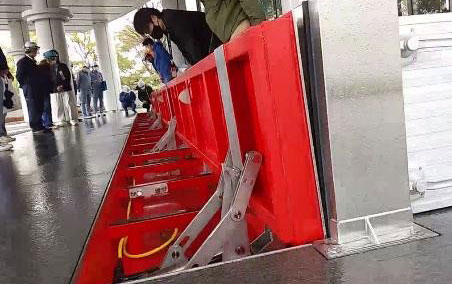 Gates that can be raised and lowered

Achieving Environmental Value Trading Such as CO2 Reductions, for Which Global Demand is Remarkable

In April 2022, IHI Corporation and Fujitsu launched a joint business project with the aim of contributing to the realization of a carbon-neutral society and to revitalize the market of environmental value trading(*1) ecosystems. Under this joint project, IHI and Fujitsu will work toward the commercialization and promotion of an environmental value distribution platform by leveraging their business knowledge in blockchain technology and new carbon neutrality technology. These efforts will be targeted at aspects of the environmental value trading market such as the efficient reduction of CO2 across corporations and countries, which is a theme for which initiatives are being conducted on a global scale. Specifically, the two parties will create tokens(*2) expressing the environment value of CO2 reduction as calculated from data through IHI's IoT platform ILIPS (IHI group Lifecycle Partner System) and establish a platform for distributing these tokens to the environmental value trading market by leveraging Fujitsu's ConnectionChain security technology to safely interconnect various blockchains, thereby aiming for the efficient distribution of environmental value.
The two companies will aim to efficiently distribute environmental value such as CO2 reductions created by companies around the world through the platform that will be launched through this joint business project, and contribute to the realization of a carbon-neutral society, which is a common global goal. 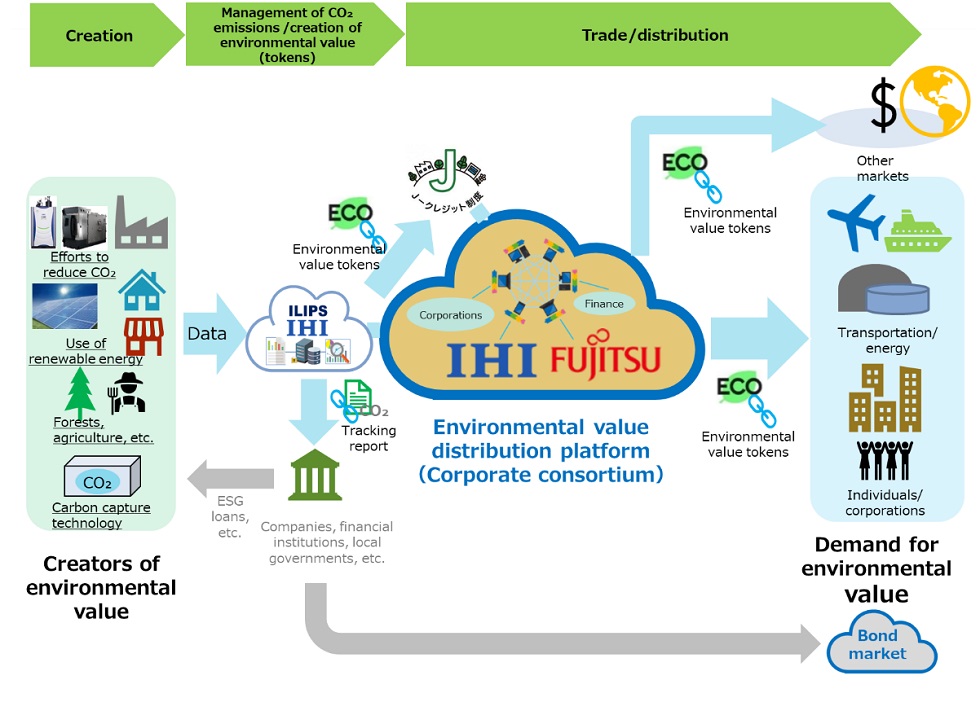 TEPCO Energy Partner, Inc., GridShare Japan Corporation (a 100% subsidiary of ITOCHU Corporation), Ridgelinez Limited, and Fujitsu conducted a field trial aimed at the distribution of environmental value between households and businesses, with the aim of achieving carbon neutrality. Until now, households have not utilized the environmental value generated during self-consumption of electricity from photovoltaic power generation. From November 2019, in conjunction with the end of the Feed-in Tariff Scheme for Renewable Energy (FIT) period, the unit price of electricity sold will be lower than during the FIT period. Therefore, we assume that the environmental value that is not used during self-consumption will increase even further. In the joint field trial project, in order to solve the problem in which precious environmental value is not being utilized, we devised an app that converts the environmental value generated during self-consumption into tokens (crypto assets), and then uses those tokens to support companies that contribute to the SDGs. With the aim of directing users' attention to the environmental value of self-consumption that has been unutilized thus far, use tokens as a form of visualization and created an app that allows users to continuously enjoy a series of events consisting of collecting more tokens in conjunction with a greater amount of self-consumption, using those tokens to support corporations, and then receiving novelties gifts from companies. By using blockchain in this app, we are able to perform the integrated process of collecting self-consumption data of solar power generation, and managing and issuing environmental value certificates. In addition to users having fun with this app, corporations are also able to collect precious environmental value and utilize it for initiatives such as RE100. Other benefits include the ability to gain understanding for corporate environmental contribution activities through the app, and the ability of corporations to heighten engagement with users through novelty gifts.
This joint field trial project had a one-month field trial period from February 14, 2022 to March 21, 2022, which includes the questionnaire response period. About 200 monitors from ordinary households participated in the project. When a monitor actually consumes the electricity generated by the solar power generation, a token called Ohisama Coin is collected. The "Ohisama Coin" is used to virtually support three projects: (1) Kawasaki Frontale, (2) Cool Japan, and (3) Mothers and Children in Africa. (The African Mother and Child Support Project is being exhibited on the Web at the Tokyo International Conference on African Development (TICAD) by the Japanese government, and future collaboration is also being considered.) By examining the results of the joint field trial, we were able to identify current issues with systems and apps, as well as issues with future business development. We are currently considering holding new field trials from FY 2022. 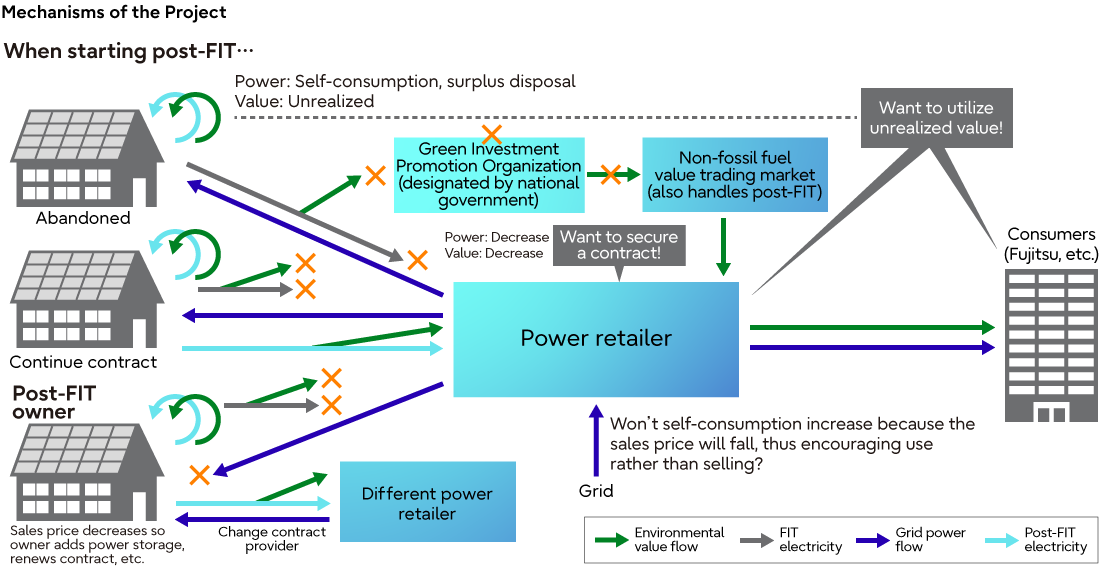 (a) Issues after post-FIT at ordinary households

(b) Image of screen for the Ohisama Coin token app ENERES Co., Ltd. and Fujitsu have applied blockchain technology to develop a system that realizes the trading of insufficient and surplus power among power consumers. Specifically, in response to requests from power transmission and distribution companies to curb demand-side power when supply-side power is in short supply, we operated cogeneration(*5) power generators at Fujitsu's Numazu Plant. We have been working on the VPP/DR field trial for seven years, from the negawatt trading(*6) field trial in 2015 to the power supply severe weather adjustment capacity(*7) for Power I' (ability to adjust to sudden increases in demand in the event of a once-in-a-decade heat wave or severe winter) in 2021. In this field trial, in addition to acquiring incentives through the effective use of cogeneration, we also utilized distributed power sources to solve the environmental issue and social issue of securing power supply adjustment capacity to respond to the sudden increase in demand during severe weather in the TEPCO service area. With cooperation from Fujitsu Laboratories, we utilized the blockchain technology developed so far to address the identified issues, thereby developing a power loan trading technology for mutual loaning of surplus power among consumers who have contracted with aggregators(*8) in the power field. We utilize this technology in various aspects of Fujitsu's energy business. Based on the experience and know-how gained from this project, we will further collaborate with AutoGrid in the United States to expand renewable energy and realize a carbon-free society by maximizing the use of distributed energy resources in the Japanese energy market. 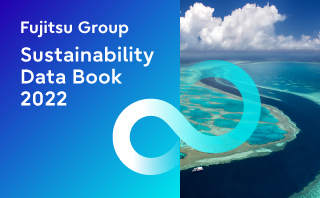