Long-term Goal to be achieved by FY2030

Policies and Structure for Implementation

The Risk Management & Compliance Committee and the Region Risk Management and Compliance Committees regularly verify the current operational status of the Global Compliance Program and file reports with the Board of Directors. Under the initiative and supervision of top management, these Committees implement and operate the internal company rules, training activities, and monitoring systems necessary for compliance with the laws and regulations that concerns the business activities of the Fujitsu Group.

The Fujitsu Way Code of Conduct

The Fujitsu Way contains a Code of Conduct that all Fujitsu Group employees should abide by, shown on the right.

Fujitsu has also refined the Fujitsu Way Code of Conduct, developed Global Business Standards (GBS) （*2） in 20 languages to serve as a guide on legally compliant behavior for all Fujitsu Group-affiliated employees around the world, and applies GBS uniformly across the Fujitsu Group.

Top Management proactively and continuously expresses its intentions to strive for compliance through their measures such as transmitting messages to employees, and in doing so, Fujitsu puts the Fujitsu Way Code of Conduct and GBS into practice, and make them widespread across the entire Fujitsu Group.

After the antitrust matter in relation to transactions for communication equipment targeted at electric power companies the President himself sends repeated messages to all employees, declaring that Fujitsu will put an end to compliance violations, including bid rigging and forming cartels. Even overseas, regional heads and Group company top managers continuously send messages that explain the importance of compliance and corporate culture that has zero tolerance for illegality.

Furthermore, starting in December 2017, Fujitsu newly established the Fujitsu Compliance Week in accordance with International Anti-Corruption Day on December 9th, which is designated by the United Nations, and engages in measures like sending out simultaneous messages across the Fujitsu Group to encourage employees to think once again about compliance and to promote the discussion.

Fujitsu has formulated the Fujitsu Global Compliance Program (GCP) in order to implement and disseminate the Fujitsu Way Code of Conduct and GBS, and is working to maintain and improve the global legal compliance structure across the entire Fujitsu Group. The GCP systematically organizes our various compliance-related activities into five pillars. While clarifying what items Fujitsu needs to address on a continual basis, the GCP also promotes external understanding of Fujitsu’s compliance structure and its compliance activities. Based on this GCP, we take factors such as the legal systems of each country/region and the guidelines of their government institutions into account, and implement various policies and initiatives in each region.

When implementing the GCP, we establish internal Group rules and deploy an officer responsible for compliance activities to each region to secure the implementation structure. We also continuously provide employees with various forms of training, and aim to embed the Fujitsu Way Code of Conduct and GBS. In addition, we have established an internal whistleblower system(*3) in case of compliance issues, and in the event that compliance violations are discovered, employees are required to immediately report them to the Risk Management & Compliance section. We periodically verify the effectiveness of the GCP through measures such as risk assessment, audit, and reviews by external specialists, and continuously work towards improve the GCP. 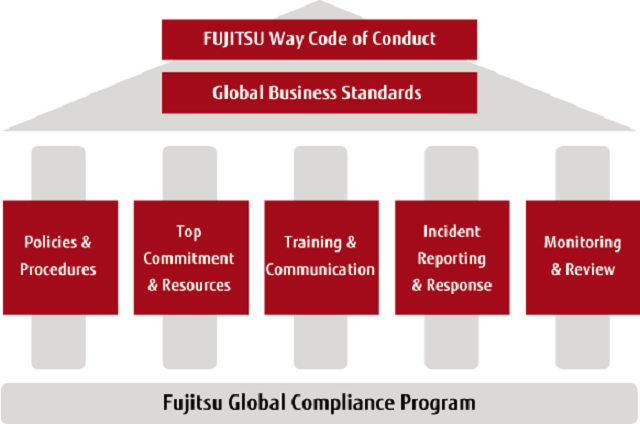 Our Response to Compliance Issues

In July 2016, Fujitsu was found to have violated the Antimonopoly Act with regard to coordinating an order of electric power security communications equipment for Tokyo Electric Power Company., Inc. (now Tokyo Electric Power Company Holdings, Inc.), and was ordered to cease and desist, in addition to being ordered to pay a surcharge (hereafter, the TEPCO case). Subsequently, in February 2017, Fujitsu was found to have violated the Antimonopoly Act with Chubu Electric Power Co., Inc. regarding transactions for hybrid optical communications equipment and transmission-path equipment (hereafter, the CEPCO case). With regard to the CEPCO case, by immediately filing for immunity from or reduction of surcharges, Fujitsu was fully exempted from having to pay a surcharge, and also avoided being subject to a cease and desist order. Fujitsu will once again deeply reflect on what led to this series of incidents, and sincerely apologizes to all parties affected for the trouble caused.

Fujitsu took disciplinary action against the employees involved in these violations and imposed salary reductions (a 10-30% reduction in monthly salary for three months) on seven executives, including the Chairman and the President, based on a resolution by the Board of Directors. Immediately after the TEPCO case came to light, the President declared that bid rigging and cartel forming would be stamped out, and continued to repeat this message to all executives and employees. The executives in charge have also made Fujitsu’s commitment to compliance known to their subordinates. As mentioned above, Fujitsu also conducts compliance training for all Fujitsu Group executives and employees inside and outside Japan.

Furthermore, with the aim ofsecuring effectiveness of the GCP in Japan, Fujitsu established the Domestic Compliance Program, based on Japan Fair Trade Commission documents about the state of business compliance with the Antimonopoly Act. In FY 2017 and FY 2018, Fujitsu adopted Antimonopoly Act-focused internal seminars and audits as key measures, promoted relationship-building and two-way communication with the relevant divisions, and worked to create an environment that would not allow for bid rigging.
As we continue to enhance our compliance-related initiatives based on these programs, we will work to win back the trust we had early on, and strive to prevent such issues from happening again.

The export of goods and the transfer of technology that could be used for the development or production of weapons of mass destruction or conventional weaponry is controlled by an international framework for security export controls, with the objective of maintaining global peace and security. In Japan, regulations for security export controls are implemented under the Foreign Exchange and Foreign Trade Act (the Foreign Exchange Act).

In line with the Fujitsu Way Code of Conduct’s stipulation that employees should comply with all laws and regulations, Fujitsu has enacted “Internal Compliance Program” on Security Export Control Regulations whose fundamental objective is the promotion of security export controls that are not only in accordance with the Foreign Exchange Act, but with the Export Administration Regulations (EAR) of the United States, which are applied extraterritorially.

Fujitsu has established a system in which the President serves as the designated Chief Security Export Control Officer, while the Security Export Control Office in the Legal, Compliance and Intellectual Property Unit serves as the organization that promotes security export control activities. The Security Export Control Office carries out all classification and transaction screening (verifying the country/region receiving the goods/technology, the intended application for it, and the identity of the client) for export of goods and the transfer of technology to overseas locations, where all necessary licenses are adequately obtained before shipment. In addition, in the “Internal Compliance Program” such process is established that legal violations shall be reported immediately. When conducting business, in order to prevent legal violations by misinterpretation of and/or overlook of related regulations, we coordinate closely with the Ministry of Economy, Trade and Industry, which has jurisdiction over export administration regulations.

Our Approach to Tax Matters

Tax compliance at Fujitsu is carried out according to the Fujitsu Way Code of Conduct.