Through a decision by the Board of Directors in December 2015, Fujitsu formulated a basic policy that sets out its approach to corporate governance (the "Corporate Governance Policy"). This Policy has been deliberated and established to best fit the present company conditions. However, considering the objective of corporate governance—that is, to conduct a better management—the company is working to continuously review the Policy so that it does not become too rigid or lose substance, as well as holding periodic discussions on the Policy in the Board of Directors Meeting to maintain the best corporate governance structure.

The company recognizes that corporate governance is an indispensable mechanism to manage the company under our Purpose (from the Fujitsu Way). This is not merely to pursue short-term profits, but to ensure the trust of customers and business partners, to encourage employees to engage in activities vibrantly and proudly, and to contribute to society. For these reasons, the company designed a governance structure based on the following approach.

The latest version, revised in December 2021, can be downloaded from the URL below.

Corporate Governance Structure (as of December 23, 2021)

The Company held 14 meetings of the Board of Directors in FY2020 (including two extraordinary Board of Directors meetings) to discuss the formulation of the Management Direction and measures for its implementation as well as to decide a new management system based on the recommendation by the Executive Nomination Committee.

The activities of Audit & Supervisory Board Members during FY 2020 included attending, and expressing opinions at, meetings of the Board of Directors, meetings of Independent Directors and other important meetings, inspecting important approval documents, exchanging opinions with Representative Directors, auditing operations of the head office and subsidiaries, exchanging information with auditors of subsidiaries, hearing reports from Accounting Auditors, hearing the status and results of an audit from the Internal Audit Department, and hearing the status of whistle-blowing activities from the Compliance Department.

In addition, with respect to the key audit matters that were adopted in FY 2019, we continued to hold a suitable number of discussions and deliberations with Accounting Auditors in FY 2020. The discussion topics were potential risks of material misstatements in the consolidated financial statements and impacts of, and developments in, material events, etc. that occurred in FY 2020.

The members of each committee appointed in July 2021 are as follows. Additionally, the secretariats of both committees are operated by the Company’s HR and legal departments.

Following the July 2020 appointment of members to the two committees, up to the end of FY2020 the Executive Nomination Committee met three times to discuss the election of Representative Directors (including the CEO) and the nomination of candidates for Director, etc. The Compensation Committee met twice to discuss the level of compensation for Directors and Auditors, the composition ratio, etc. Both committees provided recommendations to the Board of Directors.

The diagram below illustrates the Company's corporate governance structure. 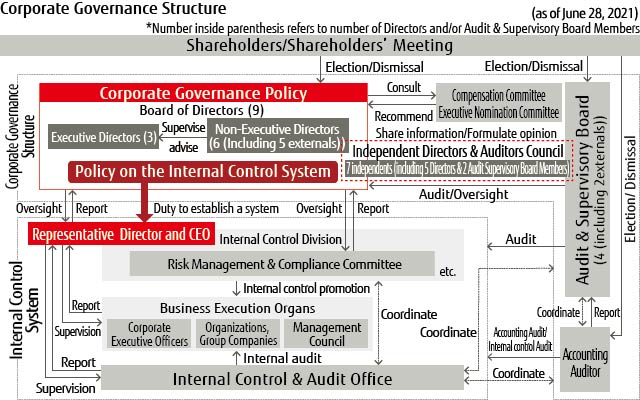 Compensation paid to Directors and members of the Audit & Supervisory Board is determined based on the policy on the determination of the details of compensation, etc. for individual Directors established by the Board of Directors, subject to approval by the Compensation Committee.

To continuously increase the corporate value of the Fujitsu Group, it is necessary to pursue management efficiency and control risks arising from business activities. Recognizing this, the Board of Directors have formulated the "Policy on the Internal Control System", which provides guidelines on: a) how to practice and promote the Fujitsu Way, the principles that underlie the Fujitsu Group’s conduct; and b) what systems and rules are used to pursue management efficiency and control the risks arising from the Company’s business activities.

See below for the full text of the Policy on the Internal Control System and an overview of the operating status of the systems tasked with ensuring appropriate business practices.