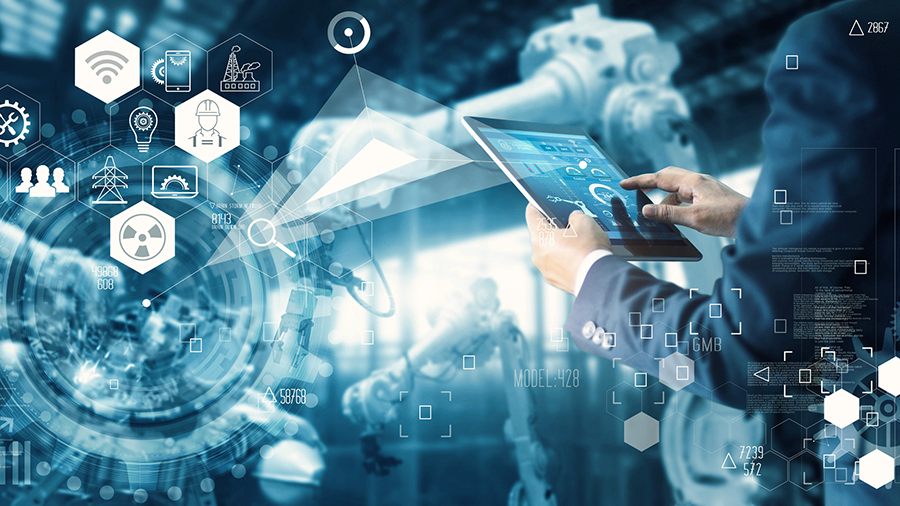 The objectives of developing the supercomputer Fugaku (hereafter, Fugaku) are to achieve a system with up to 100 times greater application performance than that of the K computer and to ensure general versatility to support the operation of a broad range of applications. Accomplishing this required an integrated development environment that supports everything from the development to the execution of applications that extract the maximum performance from the hardware, but there were significant challenges in achieving this goal. First, it required development optimized for the CPU used by Fugaku and support for various applications. Moreover, it required support for new hardware and increased memory usage due to the increase in the total number of processes in the message passing interface (MPI) communication library. In addition, it required improvements of the practical usability of application development support tools. This article describes such initiatives for the application development environment.

Supercomputer Fugaku (hereafter, Fugaku) [1] is equipped with the high performance “A64FX” CPU that adopts and was developed with Arm Limited’s instruction set architecture (hereafter, Arm architecture), features general versatility that supports various applications, and achieves massively parallel processing through the Tofu Interconnect D (hereafter, TofuD) described below. The development goal for Fugaku was to achieve a system with up to 100 times greater application performance than that of the K computer [2]. Accomplishing this required an integrated development environment that supports everything from the development to the execution of applications that extract the maximum performance from the hardware. The developed Fugaku has demonstrated a high level of performance by taking first place worldwide in the four categories of TOP500 [4], HPCG [5], HPL-AI [6], and Graph500 [7] in the high-performance computing (HPC) rankings announced at the International Supercomputing Conference (ISC) 2020 [3].

This section discusses the technological development of the compiler for Fugaku.

The compiler for Fugaku supports three languages, Fortran/C/C++. The development objectives were to achieve up to 100 times greater application performance than that of the K computer for applications relating to social and scientific priority issues that should be selectively undertaken by Fugaku (hereafter, priority issue apps) and to enable the operation of various applications. In order to achieve these objectives, it is necessary to understand the features of the A64FX and to enhance the appropriate features. The following two issues were extracted through cooperative design (co-design) with the applications.

The following subsections explain the initiatives with respect to these issues.

First, to promote the use of vector instructions, the Scalable Vector Extension (SVE), newly adopted by the Fugaku, was utilized. With SVE, it has become possible to use a predicate register to specify whether or not to execute operations on each element of the vector instructions. As a result, this enables the vectorization of complex loops that include IF statements and makes it possible to execute at high speed.

Next, software pipelining (SWP), which is a strength of the Fujitsu compiler, is important as an optimization for increasing the parallelism of instructions. While the K computer has 128 vector registers, Fugaku has a limited 32 registers. In order to effectively run SWP, which requires many registers even on Fugaku, loop fission optimization was enhanced. Loop fission is an optimization that considers the number of registers and the number of memory accesses for a loop with many statements and fissions the statements into loops to which SWP can be applied.

Figure 1 shows the evaluation results of the physical process kernel and the dynamic process kernel for NICAM [8], which is one of the priority issue apps. The former features loop structures with a lot of computational complexity and branch processing, while the latter features a high rate of memory throughput. As we can see, applying loop fission and SWP even for kernels with different characteristics can achieve a performance improvement of approximately 20%, which significantly contributed to the goal of achieving 100 times greater application performance of the K computer. 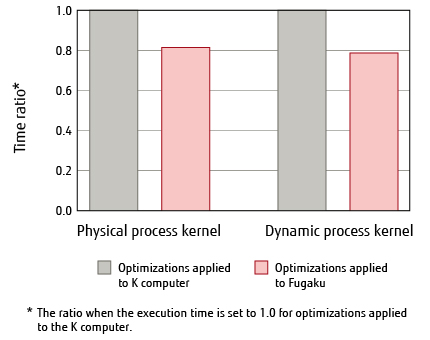 In order to broaden the range of users with Fugaku, the next objective became the ability to execute applications from various fields in addition to conventional simulation programs. Therefore, it was necessary to enhance the optimizations for integer-related operations and object-oriented programs. Accordingly, the Clang/LLVM [9] open source software (OSS) compiler was adopted, which has a proven record of accelerating C/C++ language programs, as the base and ported the optimization technologies for HPCs that Fujitsu has previously cultivated. In addition, the concurrent use of conventional functions was enabled to ensure compatibility with programs used with the K computer and traditional programs to make it easy to port from the K computer.

MPI is the de facto standard for the communication application programming interface (API) used with highly parallel applications in the HPC field, and the performance of the communication library with MPI implemented significantly impacts the practical usability of an HPC system. With the K computer, Open MPI was used, which is an OSS that has implemented the MPI standard, as the base and added unique improvements to obtain a high level of performance. Fugaku also inherited this library, but there were issues with the support for the new hardware and memory usage due to the increase in the number of processes.

This section discusses the communication library initiative for Fugaku with respect to these issues. 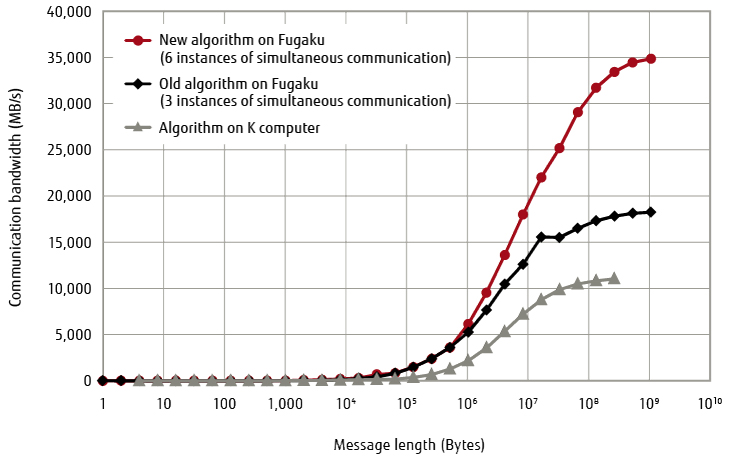 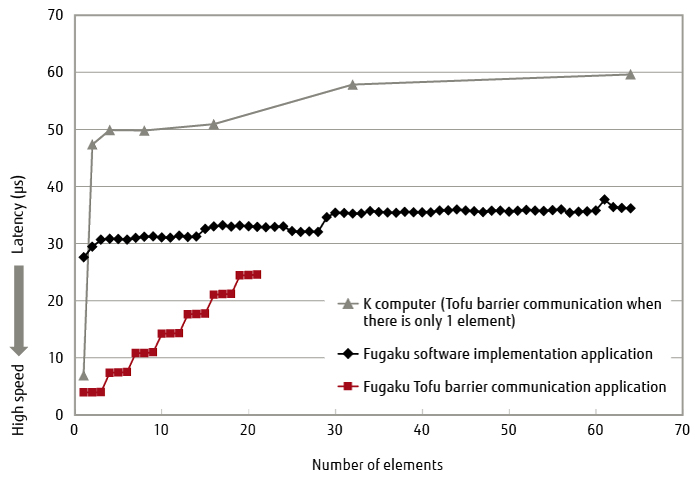 In the K computer, one node is equipped with 16 GiB of memory, and one process monopolizes the entire memory space. However, while the memory capacity for one node has been increased to 32 GiB in the Fugaku, it has been split into four pieces through a structure within the node called the core memory group (CMG). Furthermore, because it is recommended to allocate multiple processes to a separate CMG, Fugaku shares the 32 GiB among the four processes. Therefore, the memory usage per process has decreased to 8 GiB. In addition, when viewed at the scale of the number of processes for the entire Fugaku system, because there are 150,000 nodes that can run four processes on each node simultaneously, we get a total of approximately 600,000 processes, which is a significant increase from the approximately 80,000 processes of the K computer. Generally speaking, because the management information required within the MPI library also increases in proportion to the number of processes that are connection partners of MPI communication, an increase in the overall system scale becomes a factor that places a strain on memory capacity and significantly impacts application performance.

The application development support tools are composed from three types of functions according to their purpose.

The following subsections introduce the features and improvements for Fugaku of the most frequently used profiler. 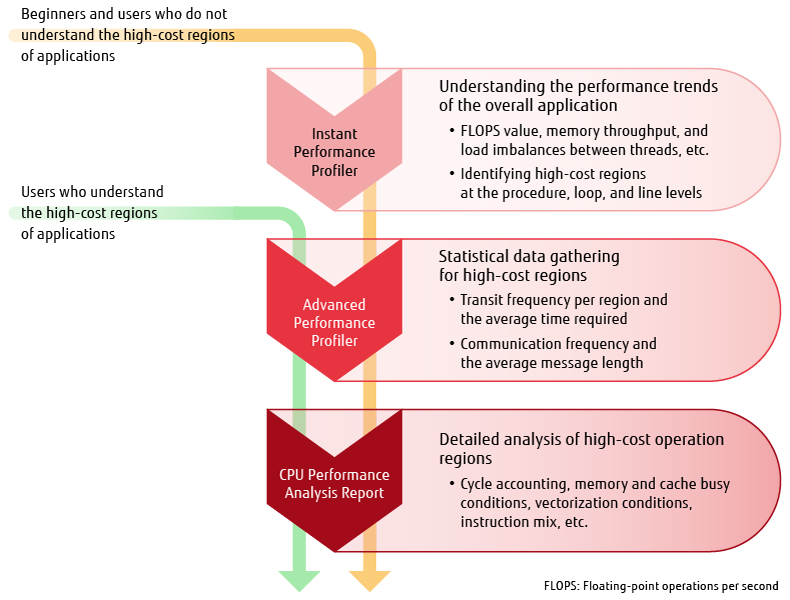 With the K computer’s profiler, there were requests from users who wanted to obtain the collected information in an easy to process and general-purpose format for creating graphs and statistical processing, etc. However, in reality the data was only provided in text and CSV formats, so supporting output formats with a high degree of general usability was an issue with Fugaku. In the Fugaku profiler, this issue was addressed by supporting output in XML format in both the Instant Performance Profiler and the Advanced Performance Profiler. 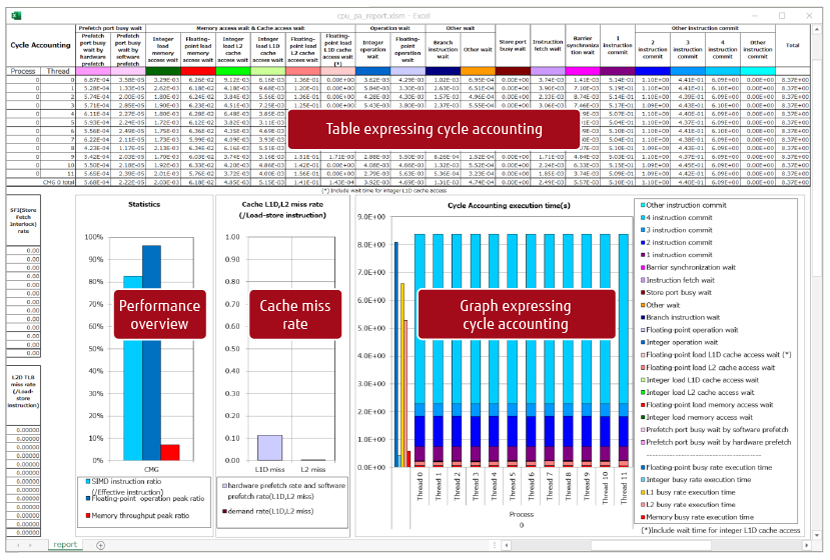 A function that is similar to the Fugaku CPU Performance Analysis Report was achieved in the K computer with a precision PA visualization function in Excel format. However, the application had to be run seven times to gather the information, making the low level of convenience an issue. Moreover, in the case of the PRIMEHPC FX100 commercial unit that applied the K computer technologies, the application had to be run 11 times.

With the Fugaku CPU performance analysis report, a report can be created after an application is run 1 time, 5 times, 11 times, or 17 times, which means that the volume of information increases with the number of runs. Therefore, the CPU Performance Analysis Report can be used in a flexible manner to change the number of runs according to the required volume of information while also utilizing the newly available types of PMU counter information to achieve a more detailed analysis.

This article discussed the Fugaku compiler, MPI communication library, functions developed with the application development support tools, and initiatives to improve performance. Starting with the K computer and its commercial successors such as the PRIMEHPC FX10 and FX100 and continuing up to the Fugaku, changes were made to the architecture and the hardware, which required support for major software changes every time. However, resolving these issues by incorporating clever solutions in each software version significantly contributed to achieving the Fugaku development objective of reaching 100 times greater application performance than that of the K computer.

Fugaku has taken the top spot on the TOP500 and other categories at ISC 2020. Going forward, software improvements will be essential in order to use Fugaku and commercial units such as the PRIMEHPC FX700 and FX1000 as cutting-edge research and development platforms. While placing importance on user convenience, the developers of Fugaku would like to provide high-performance functions and tie those characteristics to innovative results in science and technology. 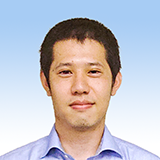 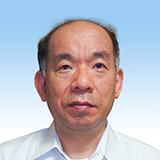 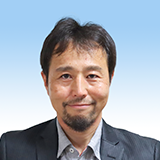