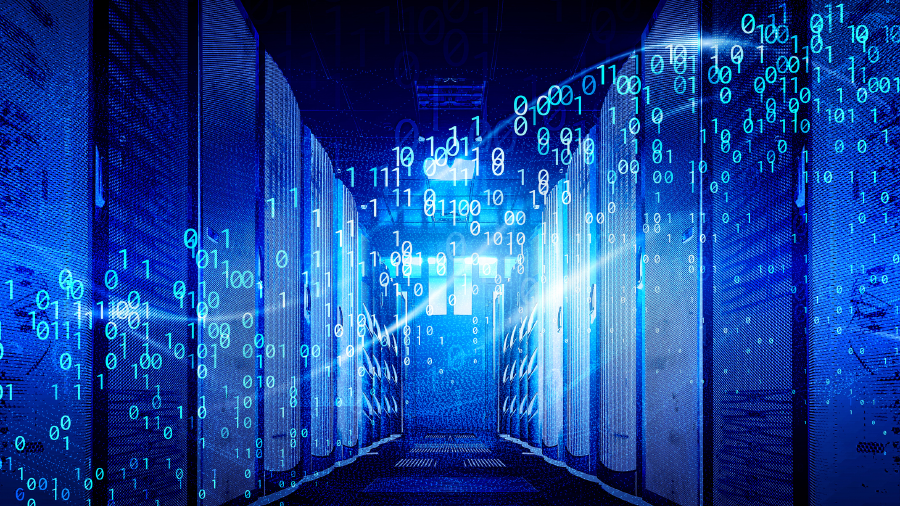 The K computer and its successor supercomputer “Fugaku” are world-class supercomputers that are massively parallel computers made up of 88,192 and 158,976 interconnected nodes respectively. This 100k-node scalability is made possible by an interconnect technology developed by Fujitsu that features high dimensionality. The partitioning and virtual torus functions of the technology prevent interference in the communications between multiple parallel programs and support optimization of communication patterns within each parallel program to ensure stable communication performance, and allow partitions to remain in use even when they contain failed nodes for high availability. This article describes the interconnect technology with high dimensionality used in the K computer and the supercomputer Fugaku.

World-class computer simulation is an essential tool for resolving complex social problems and for advancing state of the art science and technology. These large simulations are executed on machines called parallel computers. A parallel computer consists of a large number of nodes with processors and an internal network called an “interconnect” that connects these nodes together. Each processor executes its own small part of a calculation and the overall simulation is achieved by the nodes exchanging results and other data via the interconnect.

With 88,192 interconnecting nodes, the K computer [1，2] was one such massively parallel computer. It provided scientists and engineers from Japan and overseas with a world-class environment for computer simulation. Its successor, the supercomputer Fugaku [3], meanwhile, has 158,976 interconnecting nodes [4]. These are huge systems on the scale of a large data center and, along with an interconnect that delivers high-performance communications between nodes, their requirements include functions to support the optimization of communication patterns and prevent interference in the communications between parallel programs, and also high availability to maintain node utilization and prevent system shutdowns.

The author of this article was awarded a Medal of Honor with Purple Ribbon in the 2020 Spring Conferment for his development of high-dimensional interconnect technology for massively parallel computers [5].

2. Past techniques and their problems

Interconnects that connect hundreds or thousands of nodes have, to date, mainly used networks with the “fat-tree” or “folded Clos” topologies that consist of multiple levels of network switches. In fact, the development of interconnects capable of surpassing the fat-tree configuration has been one of the major technical challenges facing the field of world-class supercomputers. When the development of the technology described in this article began in 2005, three-dimensional interconnects capable of connecting more than 10,000 nodes were successfully implemented. IBM’s Blue Gene/L announced in 2004 [6], for example, achieved performance exceeding that of the first-generation Earth Simulator (a Japanese supercomputer) by connecting 32,768 nodes with embedded processors. Similarly, Red Storm announced by the US company Cray Inc. in 2005 [7] connected 10,880 nodes with off-the-shelf processors. 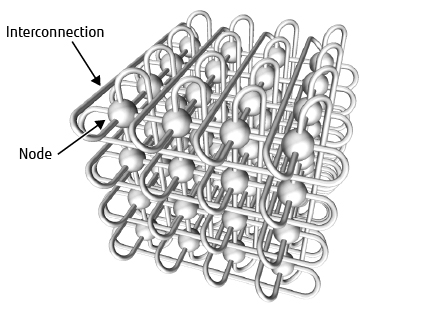 3. High-dimensional interconnect technology and its implementation 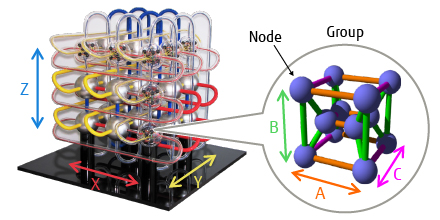 The six-dimensional mesh/torus can be partitioned at any location along group boundaries. Because this partitioning can be more fine-grained than is possible with a three-dimensional torus and eliminates the need for partition switches, parallel programs with various levels of parallelism can execute concurrently without their internal communications interfering with each other. Moreover, the high dimensionality increases the number of links, all of which are available for communication. This improves communication performance because the paths between nodes are shorter and there is less communication congestion. 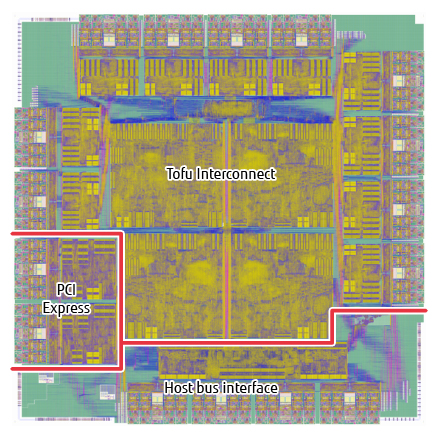 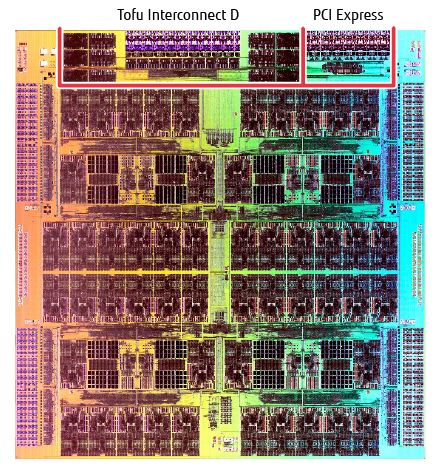 Shipment and configuration of the K computer got underway in 2010, with operation officially commencing in 2012. The K computer made of 88,192 interconnected nodes was made possible by the high degree of scalability, flexible partitioning function, and high availability of the Tofu interconnect built using the techniques described in this article. The supercomputer has been used by scientists and engineers working in a wide range of fields at research institutions, universities, and companies, including drug development, the study of earthquakes and tsunamis, weather, space, manufacturing, and materials development. It has achieved a high level of system utilization exceeding 97% excluding scheduled maintenance. The performance of the Tofu interconnect has also contributed to the K computer recording world-leading performance at benchmarks such as Graph500 [12] and HPC Challenge Global FFT [13] that emphasize interconnect performance. The K computer ceased operation in 2019. The technology was also awarded the 2014 Imperial Invention Award [14].

Shipment of the K computer’s successor, Fugaku, commenced in 2019. The new supercomputer used the Tofu interconnect D to connect a total of 158,976 nodes. The technology was announced in 2009 as being intended to support world-class supercomputers as they reach the exascale class [8]. The goal of this technology will be achieved by the successful commissioning of the Fugaku, the successor to the K computer that is based on the same technology.

New technological trends that have arisen in the field of microelectronics over recent years include a slowing of semiconductor miniaturization and the emergence of high-density packaging techniques. Meanwhile, the computer science and engineering field has seen growing interest in domain-specific architectures for technologies such as AI. This means that the supercomputers to come after the Fugaku will require new system architectures and interconnects that are suited to these changing trends.

This article described the high-dimensional interconnect technology that features scalability, a flexible partitioning function, and high availability. The interconnect provides the K and Fugaku systems with excellent reliability, featuring stable communication performance and easy communication optimization as well as scalability. The author would like to take this opportunity to sincerely thank everyone involved for their extensive efforts over many years.

Having played an important role in the field of supercomputing for many years, Fujitsu has contributed to resolving challenges facing society and to advancing science and technology. Through the success of the K computer and the successful completion of the supercomputer Fugaku, Fujitsu looks forward to continuing to play this important role into the future. 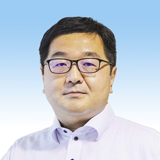