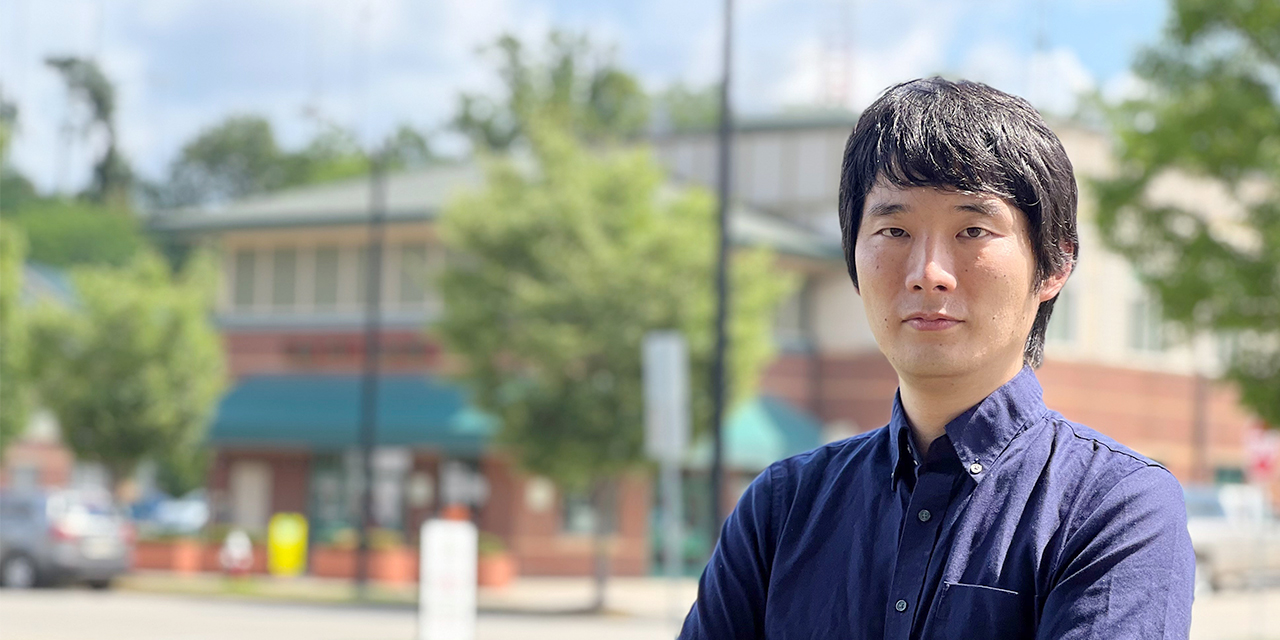 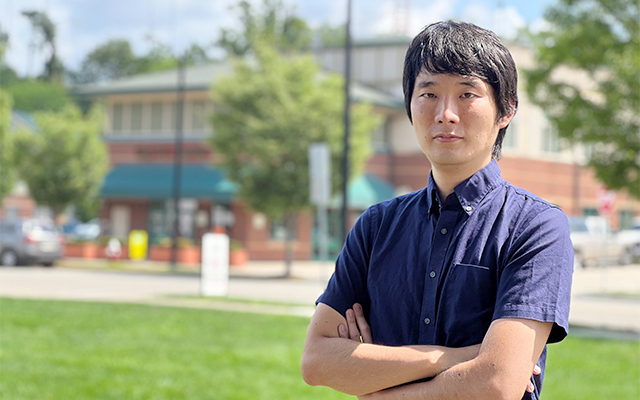 Turning "Experience" into the "Power of Thinking”

I have always loved science experiments since I was a child, starting with the magic of extracting starch from potatoes. I tended to be a loner for most of the time in school, usually studying alone without a great deal of interaction with other classmates. That all changed, however, when it came to working on experiments in groups! We all got together and had a lot of fun, actually holding the test equipment and working with the chemicals as we observed the experiment unfold. I found it fascinating to visualize invisible phenomena such as components.

At home, I enjoyed modifying small machines such as a mini four-wheeler toy. I would immerse myself in taking motors apart, winding coil conductors, and making improvements while experimenting. I got a real sense of satisfaction from seeing the modified objects running faster or performing better as a result of my efforts.

Ever since childhood, I have always been someone that likes to think things through carefully, before building something and trying it out. As an adult, this is still how I approach things today.

How I came to study electrical engineering…

I can remember a particular incident during my senior year of high school. As well as my interest in science and chemistry, I was also a passionate baseball player and was working hard at both my study and ex-curricular activities. I was totally immersed in baseball practice in every spare moment and during a physics class on one particular day, I was so exhausted that I fell asleep. My physics teacher was furious with me, saying, "Wake up! If you keep on like this, you won't get any credits and will fail the class!" The physics teacher's angry voice still rings in my ears to this day, even after all this time. I woke up with a real start and fully appreciated the trouble I was in! Needless to say, I got a lot of lectures from the teacher after that.

But all of this led to a pivotal moment in my life. I hadn’t fully made up my mind where to go or what to focus on for my university education, as I was not sure of the path I wanted to follow. My teacher said, "If you create a new battery, you can start an industrial revolution. But you must study physics as well as chemistry."

Although I was interested in electricity, physics was not my strong point. His words fired me up and made me determined to show him that I could turn something I was not good at into something I was good at. I really applied myself to studying physics and enrolled in the Department of Electrical Engineering, which is slightly removed from battery invention, and ended up doing research on power system batteries.

After entering university, I studied in the field of electrical engineering, specializing in issues surrounding transforming weak electricity into strong electricity. By conducting a variety of experiments, I experienced and learned how to handle electricity in a realistic manner. In addition, we conducted experiments on how to realize peak shaving (*1) and peak shifting (*2), simulating and analyzing the results on a personal computer. For example, we looked at the example of a factory or company that uses a lot of electricity in the daytime. By storing electricity in Battery Energy Storage System (BESS) during the night when electricity is not used as much, we could see that it was possible to reduce electricity fees and CO2 emissions. Initially, I wanted to become a researcher in the field of electrical energy. But on the other hand, I was also beginning to develop an interest in the information processing field. So it led me to try and combine the two interests.

When it was time for me to focus on job hunting, I heard a corporate presentation given by a recruiter from Fujitsu's research institute, who visited my university's graduate school. I was surprised to learn that Fujitsu's research institute had a recruiting section for research students in the environment and energy major. I was attracted by many points that to the electrical power energy data simulation that I had been working on. I was also impressed by the company's strength in information and communication technology, so after researching the company in more detail, I decided to join.

During my first few years with the company, I experienced some challenges due to research themes changing on a project-by-project basis. It was necessary for me to be very flexible, as both my department and supervisors changed over. However, in terms of research topics, I have found that my expertise has grown with each new project I complete, compared to when I first joined Fujitsu with no clear idea of my specialty. But it was rewarding to feel my expertise growing with each new project I completed, and to develop a sense of the direction I wanted to follow.

Initially, I was involved in the development of technology to predict and detect sewer overflows (*3). We were developing a technology that was useful for applying countermeasures against flooding damage, detecting signs of internal flooding in real time whenever a torrential downpour occurred. Personally, I was able to utilize my strengths in simulation and hone my data mining skills. I could really sense that my skillset was increasing. The next project involved a new collaboration with another company, using AI to automate mass spectrometer measurement data analysis (*4). Data analysis of mass spectrometry data for complex component samples used to be very difficult involving manual adjustments. Our approach involved automating peak picking and consequently saving both man-hours and time. I found it very rewarding to participate in the research and development of this technology.

As a result, I began to learn about the development of artificial intelligence technology and started to move in this direction as part of my daily research program.

There was a major turning point in my career in 2019. I was given an overseas assignment, moving to Fujitsu Research of Europe (*5) in the UK.

When I was a university student, I went abroad many times for academic presentations. The lifestyle and social customs overseas are very different from those in Japan, and I got the impression that people freely expressed their opinions about both work and life. I was quite positive about working overseas, because I am also a person who clearly expresses my own opinion on things.

I wanted to take this opportunity to get rid of my English language complex, and I was also excited to work with some of the top global researchers. While working in UK, I was involved in the development of AI technology for image inspection to detect abnormalities (*6). It was a very good experience for me to learn new technologies from researchers who are experts in deep learning. I also found that the cycle from research and development (R&D) to proof of concept (PoC) is very fast. The ability to move on to the next hypothesis as soon as the results of the R&D PoC were known was a major motivation for my research.

A voyage of personal discovery!

Now that I have finished my research assignment in the UK, I am starting out on a new project at Fujitsu Research of America (*7) where I am in charge of developing the Social Digital Twin (*8). This involves visualizing real-world data by reproducing, analyzing, and predicting it in real time on the digital world. By understanding the actual conditions of traffic regulations, vehicles, and human mobility status, we are working to apply proof of concepts in order to reduce CO2 emissions and traffic congestion, as well as to improve economic efficiency, and solve other complex urban issues. The application of social digital twin will improve people's lives.

As a researcher, I believe it is important constantly to move forward with curiosity and an appetite for discovery. The joy I feel as I gradually get closer to my goal, working through the research process by trial and error, is an important motivation that sustains me. One of my goals is not only to continue to produce cutting-edge technological development at the world's top conferences as a top-notch researcher, but also to win research awards that make people laugh and think, such as the Ig Nobel Prize. My ambition is to keep pursuing my research interests throughout my life, and to revolutionize the world with the things that I have developed. I just want to keep on going and going with my exciting research and development. 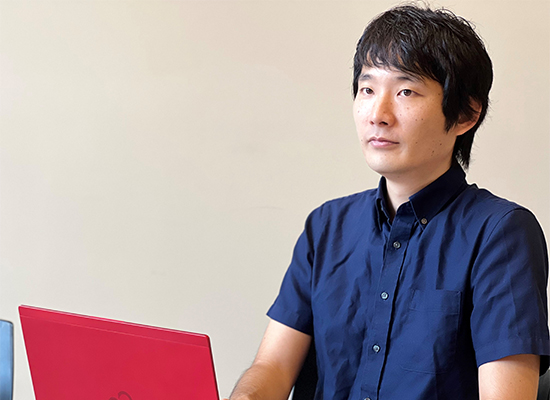 Yusuke, Hida (Converging Technologies Laboratory)
Joined in 2014. Graduate School of Environment and Energy Engineering
◇Purpose
Follow your curiosity wherever it takes you!
My hobby is cooking. I am good at planning menus and have tried everything from main dish menus to baking sweets. Recently, I have become addicted to making udon noodles from just flour. Also, I often devise blockchain games on my days off.

Not long after Yusuke’s assignment in the UK, Covid-19 began to spread. In Europe in particular, the government implemented a lockdown policy and he experienced a year of lockdown. I asked him whether this had been a difficult year. He replied, "No, it was not. It gave me time to think carefully about the research I wanted to do. Thanks to remote working, I felt the joy of being able to return to my childhood and immerse myself in the research every day.” There was no hesitation in Yusuke answer. His love of research shone through his words.