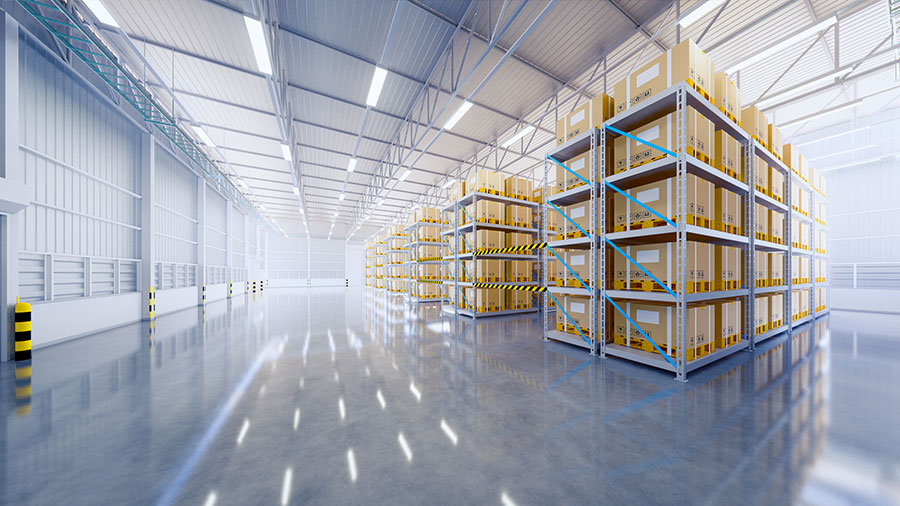 The advent of the new normal era arising from the recent changes in social environment and the spread of COVID-19 has brought about a sea change in people’s lifestyles and business models. The logistics industry has not been exempt from these impacts, and the pre-existing needs for optimization and automation have further increased. This article presents an approach of adopting AI in the optimization of picking order generation in warehouses and logistics centers in order to meet optimization and automation needs. It also presents an example of a verification project.

The advent of the new normal era arising from the spread of COVID-19 has brought about a sea change in people’s work styles, their lifestyles, and even business models. The pandemic caused a rapid increase in the number of users of e-commerce and Internet services. The volume of goods distributed increased as well, leading to a further rise in the pre-existing awareness regarding logistics reform, and needs for optimization and automation increased.

Until now, the logistics industry has long worked on operations reform in warehouses and logistics centers (hereinafter “warehouses”). One example is an improvement activity to increase productivity by optimizing receipt and shipping of goods. Specifically, improvement of processes and work, manual labor saving, and automation by using equipment to make up for labor shortages have been discussed and implemented. In addition, an approach for adopting AI is attracting attention recently. Improvement of productivity via optimization not only allows warehouse operations to be carried out with the minimum required staff but also ensures sufficient physical distance. Therefore, it leads to measures to deal with the recent pandemic as well as warehouse operations reform, an on-going task from before the pandemic.

Utilizing the knowledge and know-how obtained from digital transformation (DX) achieved through co-creation between customers and Fujitsu’s system and AI experts for warehouse operations reform as described above will improve customers’ business performance more than ever. These should be useful for Fujitsu’s business more generally, as it provides high value-added solutions, in addition to warehouse operations reform.

This article presents an approach for using AI in the optimization of picking work order generation in warehouses as well as an example of the verification project.

2. Approach to optimization of warehouse operations

As described in the previous section, the logistics industry has long worked on warehouse operations reform. However, as shown in Figure 1, warehouse operations include several work processes and there are many variations of work depending on the shape of articles handled, unit of shipment [1], and equipment installed. Bottlenecks in warehouse operations therefore vary for each customer. During the discussion for optimizing these problems utilizing AI, several elements of optimization were raised. Of those, focusing on picking operations as the work to be optimized was decided it would help reduce the needed labor and encourage labor saving as well as even ensure sufficient physical distance for the staff. The reason for this is that, with various operations, picking not only requires a large amount of human resources but also involves greatly varying work time and labor depending on the content of picking order. 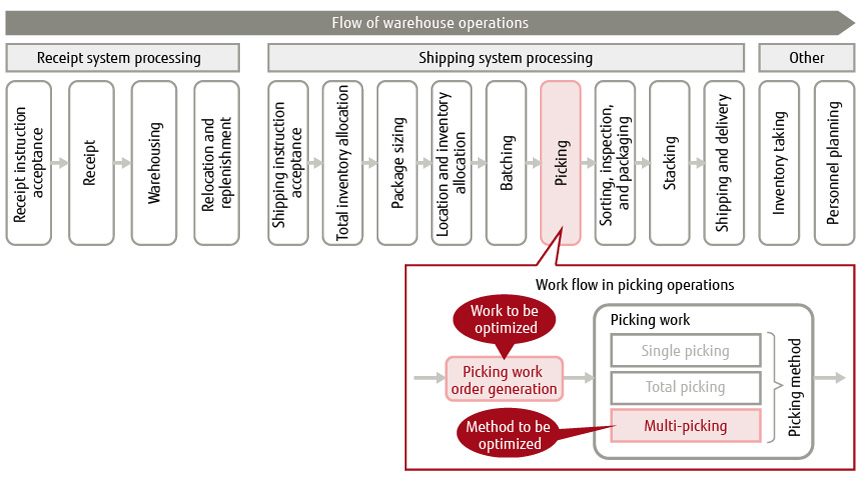 Figure 1 Flow of warehouse operations and subjects of optimization.

Furthermore, picking methods can be roughly classified into single picking and total picking, as shown in Figure 1. Single picking carried out at the same time is called multi-picking. With multi-picking, improving productivity was a challenge because picking orders were combined and implemented at the workers’ own discretion, making it dependent on individuals.

For these reasons, we decided to work on implementing warehouse operations reform through optimization using AI technology, focusing on the generation of picking work orders with the multi-picking method.

2.2 Conventional technology used in the optimization of picking work order generation and their problems

One AI technology used for optimizing picking work order generation is a conventional optimization technology for shortening work processes on the manufacturing shop floor. However, there was a problem where the constraints in warehouse operations were different from those on the manufacturing shop floor. The following are examples of constraints in picking work sites in warehouse operations (Figure 2). 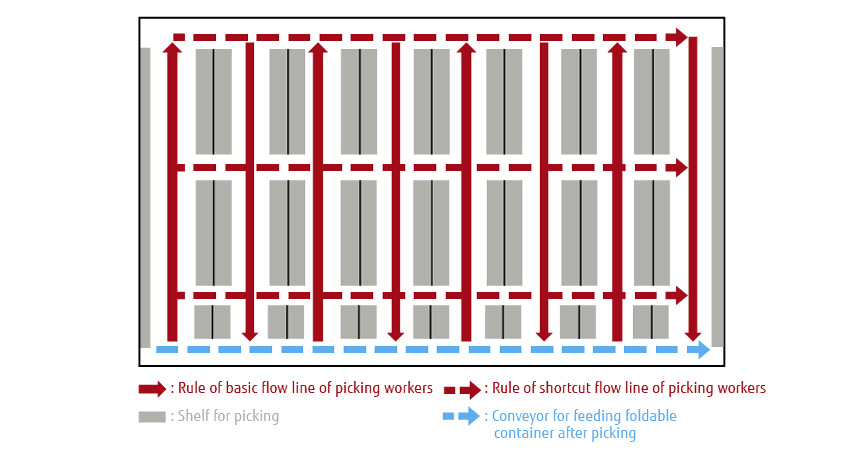 For optimization with the multi-picking method, combinations of multiple orders by multiple workers at the same time was lacking as a technical element required for warehouse operations. In addition, there was a problem where existing technologies for solving other combinatorial optimization problems were not capable of optimization in terms of avoiding congestion or constraints on site.

Technology was not the only problem. It was difficult from the point of view of investment cost to develop new AI capable of solving the problems mentioned above cheaply. 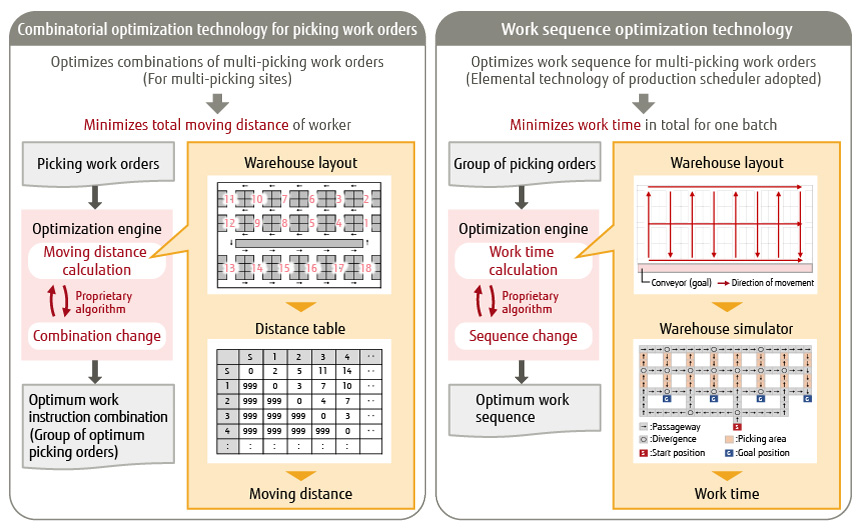 This technology is intended to calculate the optimum solution for combinations of multiple orders extracted in one set of picking orders [2]. The objective variable [3] is based on the total moving distance of all work and the simulation technology for sequential optimization under the conditions of the above-mentioned constraints and uses a round-robin method as a solution to small-scale problems. Accordingly, combinations of picking orders to be assigned to one multi-picking work are determined one by one, and those with shorter total moving distances are searched for first. Using this method supplements where the conventional technology alone was insufficient, making the technology applicable under the constraints of picking work sites in warehouse operations.

This technology is an elemental technology for drawing up production schedules as described above and it is also an effective technology for reducing work time in consideration of avoiding congestion in the warehouse [2]. The objective variable is based on the time required to complete all work and sequential optimization, and a genetic algorithm method is used as the solution to small-scale problems. The genetic algorithm method first creates an initial solution population and applies selection based on the evaluation (grading) and points of each solution. Next, evaluation (grading) of each solution obtained from the solution variation by evolution operation is repeated a certain number of times (change of generations) and the best solution from the last generation is adopted as the final solution. In addition, we made use of our proprietary time-driven discrete event simulator [4] to set the picking time, walking speed, and the number of workers per item. which has made it possible to calculate the time required to complete work with congestion taken into account. In this way, the technology can be applied to warehouse operations, something the conventional technology was unable to handle.

This section describes an example of a project by Company A, which succeeded in optimizing picking work order generation by AI.

This project was conducted at a relatively large logistics center with a target picking area 50 m long and 140 m wide and a maximum 110 workers. The foldable containers used for picking come in three types: 10 L, 20 L, and 40 L. Picking trolleys with scales capable of holding up to six of foldable containers were used to carry out multi-picking work.

In the pre-verification phase, of the entire day’s data, we only took up the result data of sextuple multi-picking, which combines six sets of picking instructions. The reason for this is that better combinations provide shorter moving distances, meaning the best results can be expected.

In the pre-verification carried out under these verification conditions, workers’ work times for one set of picking instructions resulted in wide-ranging figures. Reductions of 7.7 to 37.1% were seen as compared with conventional work times. Accordingly, we made a trial calculation to Company A of the cost-effectiveness in view of factors including the workers’ hourly wages and proposed transition to the PoC verification phase with a goal of reducing the picking work times by 10 to 15%.

In the proof of concept (PoC) verification phase, the constraints were changed to those closer to the actual operations. Seven days’ worth of all data including those other than for sextuple multi-picking were verified. Two constraints were changed. One was the elimination of the section constraint in the picking order data items. The other was the restriction of the upper limit of the number of items to be picked in the six combined sets of work orders to an operationally practical number of 80. This change was intended to prevent disparities in the numbers of items picked by workers (workloads).

As a result of verification with the conditions described in 1) added, significant reductions were achieved. The total moving distances of picking workers was reduced by 30.3% and the work times by 19.7% on average (Table 1).

In addition, we reported the verification results to Company A, which included the processing time required by the AI to make computations (ranging from 0.2 sec to 11 min depending on the date of verification and AI engine) as well as the results produced in this PoC verification. These were indicated as matters to be considered.

3.4 Issues to be resolved ahead of implementation

In order to resolve these issues, it is necessary to verify again by adding the function of aggregating the effect through comparisons between scheduled and optimized work order data and the measures for reducing the computational processing time of the AI. Doing so will allow verification to be conducted with conditions closer to those of the actual operations, marking significant progress toward implementation.

Fujitsu plans to apply various AI technologies not only to picking work order generation but also to other operations in warehouses. In the future, we aim to realize warehouse operations with WMS, WCS (MH [5]), robot, and IoT operations optimized for enhanced productivity, as shown in Figure 4. This means the realization of a mechanism to achieve overall optimization by equipping the work site (real/physical space) and the virtual space (cyberspace) in the system with a large number of individual optimizations of AI and linking them with each other, or the realization of digital twins [6]. 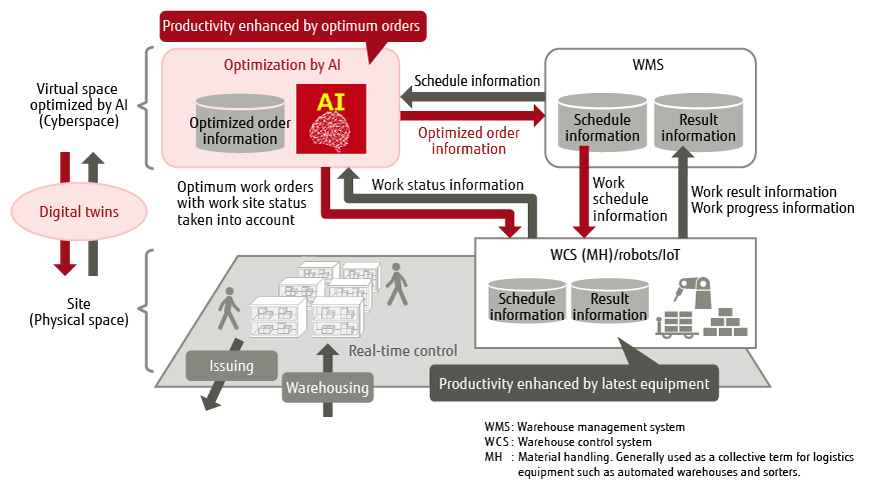 The advent of the new normal era and the diversification of needs has given rise to new business models. Conventional supply chain schemes have entered a time of change. The limits of business reforms due to labor shortages are an industry-wide issue. For customers facing issues like these, Fujitsu intends to make contributions by optimizing warehouse operations and implementing DX throughout entire logistics operations while utilizing not only its own innovative technologies but also collaborations with technologies of other companies as required. And based on the trust earned from customers, Fujitsu will enhance its logistics business as it aims to help achieve a sustainable society. 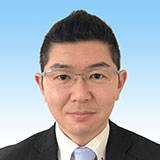 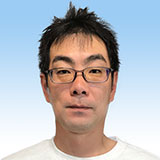 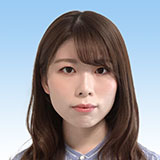 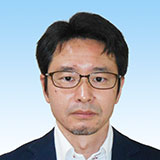 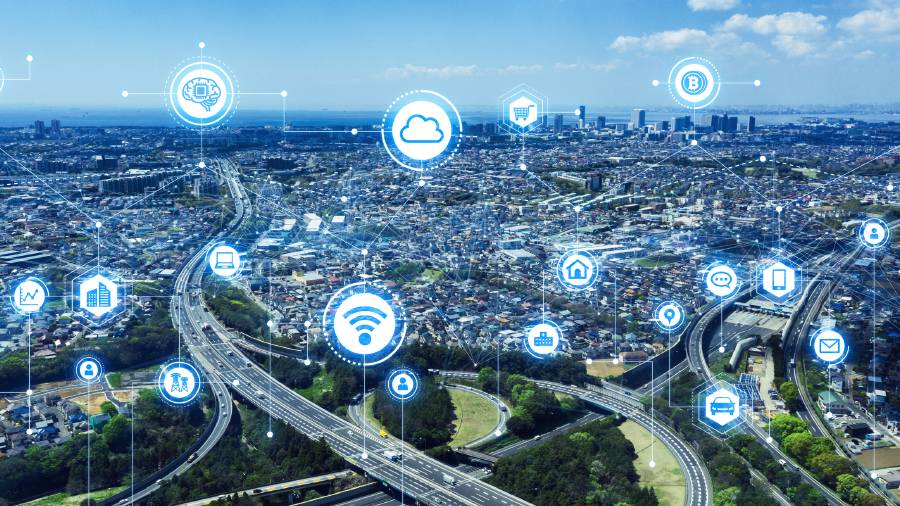