Fujitsu Limited successfully leveraged on the world’s fastest supercomputer, Fugaku, to demonstrate the feasibility of high performance, large-scale, very high-definition analyses with commercial applications widely used in the industrial field for simulations including fluid dynamics. The trials were conducted in collaboration with a number of application vendors between November 2020 and May 2021. Fujitsu and the participating vendors have additionally collaborated to validate operations and conduct performance tuning for commercial applications in high demand with manufacturers for Fugaku as well as the Fujitsu Supercomputer PRIMEHPC series, which draws on technology developed for the Fugaku project. Application vendors will begin to offer these commercial applications starting in June 2021.

Going forward, Fujitsu will continue to validate commercial applications using its PRIMEHPC series and will market these to manufacturers and other companies engaged in product development and technical research, contributing to the development of the industrial field as a whole.

Recently, companies in areas including the manufacturing industry increasingly rely on commercial applications for x86 cluster systems (1) to perform simulations including fluid dynamics and structural analysis in product development and technical research. However, the growing demand for increasingly complex simulations presents challenges for users requiring rapid calculation results. The availability of these kinds of commercial applications used as is on supercomputers like Fugaku and Fujitsu’s PRIMEHPC series, which boast large-scale, high-speed computing capabilities, could offer many potential benefits by allowing companies to continue using already-familiar applications and make use of their industry and process-specific expertise.

In collaboration with various vendors, Fujitsu conducted a large-scale, high definition simulation for improving the energy efficiency and safety of aircraft and automobiles, which represents an increasingly important priority from the viewpoint of reducing environmental impact making use of commercial applications that have been tested for the PRIMEHPC series. Using the computing resources of Fugaku (2), Fujitsu conducted simulations with highly parallel processing, validating the feasibility of performing analyses within the amount of time required by companies for practical application in the real-world.

During flight, an aircraft may experience a vibration phenomenon called buffet, which affects its safety and flight stability. Predicting buffet vibration is an important issue for aircraft safety design. This time, by executing the thermal fluid analysis application Cradle CFD | scFLOW (3) in parallel using the maximum possible 192,000 out of Fugaku’s total number of CPU cores (4) of Fugaku and analyzing a high-definition model of 237 million elements with LES (5), which is an analysis method capable of expressing fine vortexes, it was possible to observe a phenomenon whereby pressure vibration and fine vortexes are generated on the surface of the blade. This makes it possible to predict the buffet effect in greater detail than the conventional RANS (6) analysis method using a coarse calculation grid. This proved that large-scale analyses leading to the safe design of aircraft taking into account the buffet could be calculated. 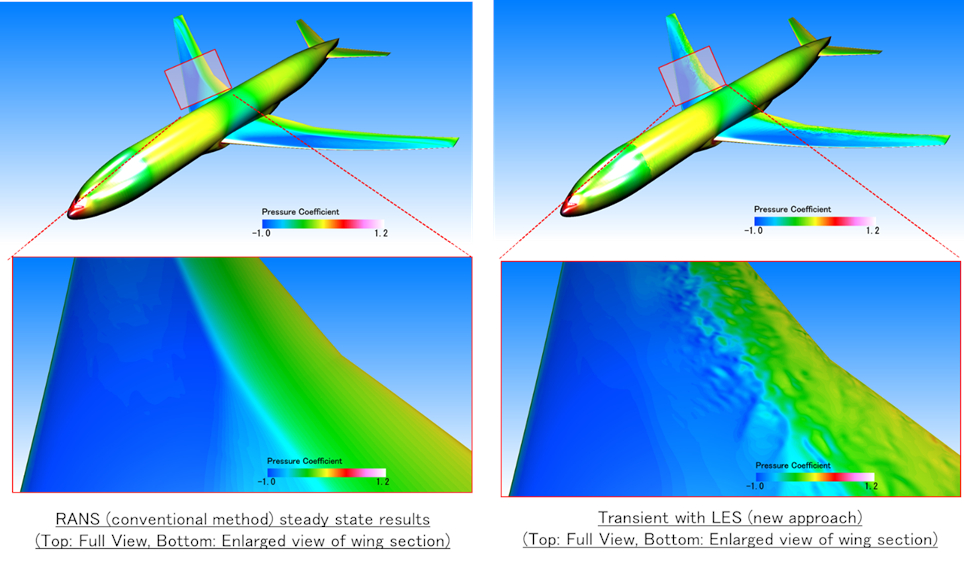 Improving the energy efficiency of engines is an important issue for improving the fuel efficiency and environmental performance of automobiles. A combustion analysis that takes into account a series of chemical reactions, such as combustion inside a cylinder caused by piston action in the engine, was performed in two hours with parallel calculation using the thermal fluid analysis application CONVERGE (7) using up to 4,620 CPU cores of Fugaku’s cores. In this analysis, the entire region was divided by a high-precision calculation grid (up to 6.67 million grids) of 0.5 mm units, and the use of LES made it possible to successfully obtain high-precision results showing a wrinkled flame structure, which would prove difficult with conventional RANS analysis. As a result, highly accurate analysis can be performed even during the limited time required for design work in the manufacturing industry, which is expected to lead to improvements in engine energy efficiency and reductions in abnormal combustion.

Results of thermal fluid analysis in the engine cylinder

3. Reduction of energy loss in driving motors for electric vehicles

To improve the energy efficiency of electric and hybrid vehicles, it is necessary to reduce energy loss in the driving motor. One of the methods to calculate the loss generated by IPM motors (8) used in electric vehicles, etc., with high accuracy is to model the steel sheet of the iron core constituting the motor one by one, and to use the method to input the current containing harmonics. Conventional x86 clusters require several weeks to complete the calculation, but using Fugaku's 8,192 CPU cores and running them in parallel in the electromagnetic field analysis application JMAG (9), it can be done in a day (10). As a result, it is expected that analysis leading to improved energy efficiency in electric vehicles can be performed in a shorter time.

Commercial applications to be verified operations on Fugaku and PRIMEHPC FX1000

Fujitsu will continue to validate the operation of commercial applications for the PRIMEHPC series to meet the unique, real-world demands of its customers across a variety of industries, including manufacturers and other companies engaged in product development and technical research that want to conduct large-scale, high-definition simulations. Leveraging its industry-leading capabilities in high performance computing and its applications, Fujitsu will continue to contribute to the active development and innovation of technology development and research.

Thanks to the efforts of Fujitsu Limited, we have confirmed that our thermal fluid analysis software can be used on the supercomputer Fugaku through this verification. Cradle CFD has been used in a wide range of industries for nearly 40 years, demonstrating the importance of large-scale computing resources in the field of thermo-fluid analysis, and this validation is a major milestone for us. This verification marks a major milestone in the field of thermal fluid analysis, and we believe that the use of Fugaku and our products will enable us to challenge the world's leading supercomputers, which were previously thought to be impossible. As part of the Hexagon Manufacturing Intelligence Group's efforts, we plan to offer Cradle CFD to the general public for use with Fugaku and Fugaku equivalent computing environments.

Ansys is excited to announce the support of LS-DYNA for Fugaku and PRIMEHPC series hardware. LS-DYNA is widely used for its multi-physics capabilities including crash simulations which often requires high computational power. Ansys looks forward to working in close cooperation with Fujitsu to bring to market LS-DYNA for the PRIMEHPC series. Ansys is working to bring other flagship technologies such as Fluent to support Fujitsu PRIMEHPC series in the near future.

The Sustainable Development Goals (SDGs) adopted by the United Nations in 2015 represent a set of common goals to be achieved worldwide by 2030. Fujitsu’s purpose — “to make the world more sustainable by building trust in society through innovation”—is a promise to contribute to the vision of a better future empowered by the SDGs.

The goals most relevant to this project 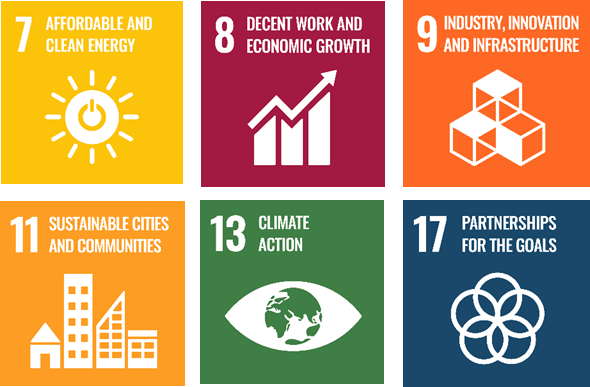