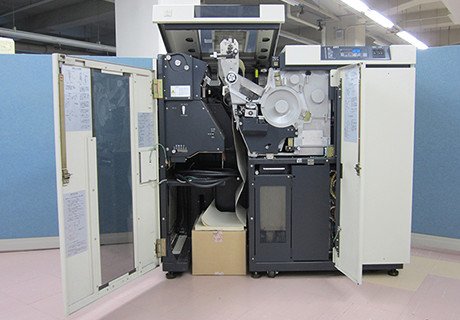 Completed in 1980, this was Fujitsu’s first Japanese-language line printer, which employed a dry-type electrophotographic system using laser writing. Line printers up to this point had used an impact system with printing type, which limited the printable characters to alphanumeric and katakana characters only. This made it necessary for costly kanji-specific systems to be used to print text which included kanji characters. In 1979 Fujitsu developed JEF, a Japanese-language information system which was able to handle Japanese characters with no special requirements, and the FACOM6715D Japanese-language line printer was developed to serve as an output device for this system. The FACOM6715D’s laser beam writing system made it possible to print nearly 7,000 characters which previously could not be represented by printing type sets.