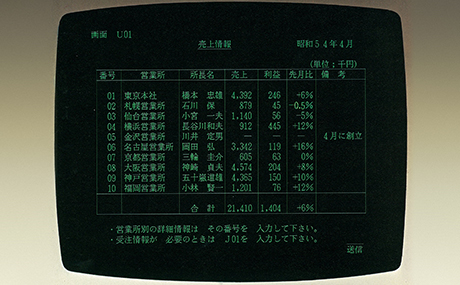 The Fujitsu Japanese Language Information System JEF (Japanese processing Extended Feature) was introduced in 1979 with the goal of being a computer system that could be used in Japanese, by Japanese people. By adding JEF to conventional alphanumeric and kana systems, it was possible for the first time to create a general purpose system able to perform Japanese-language processing of data whose contents contained both kanji and kana. It was intended to have a full range of software features including OS-based support, and was applied in all types of equipment ranging from ultra large-scale systems to business computers and terminal devices. It also went beyond the bounds of simple kanji processing to offer additional functions for creating diagrams and graphs. Since it was able to perform Japanese-language processing at a low price in addition to being easy to use and having high performance, it immediately started a “boom” of Japanese-language processing systems.