Fujitsu is releasing a new textbook on design thinking that combines practical know-how with the academic research and philosophy from POLI.Design, a design school of the Politecnico di Milano in Italy. “Transformation by Design: Planning Design Strategies and Services for Next-Generation Digital Challenges" is available in English and Japanese as a free PDF download.

Directors Shinobu Utamura and Daisuke Takashima, and Head of Production team, Joachim Box share the story and motivation behind the textbook’s development. 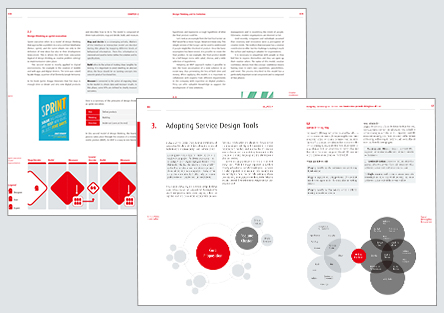 As part of its own digital transformation journey, Fujitsu is introducing the Design Thinking philosophy across the entire company.

The approach to systematic design thinking started in late 2016, following a study to benchmark its usage among design consulting firms, large companies and startups in Japan and North America. This was later extended to Europe in January 2018.

Fujitsu’s goal from the study was to identify evidence around the world of a design thinking mindset best aligned with Japanese culture.

"The findings indicated that the European application of design thinking generally took a longer-term perspective,” comments Takashima. “We understood this to have closer alignment with the Japanese mindset than the North American ethic, characteristically by a more immediate and agile design horizon. Based on these findings, we decided to forge a strategic partnership with POLI.Design in Milan."

Fujitsu and POLI.Design have worked since 2020 on programs to establish a global network of design leaders. This textbook was created to support design leaders in their incorporation of design thinking elements into daily business activities. As Joachim Box says: “Adopting a design mindset and method is essential for people aiming for and leading true transformational projects. Inspired by diversity, fueled by insight and aligning with strategic goals are the mainstays of the approach that we wanted to capture.”

This textbook was jointly planned and created by Fujitsu and POLI.Design, with a diverse, global production team led by UK-based Joachim Box, Global Head of Fujitsu’s Co-creating Program. Fujitsu contributors included Japanese team members Shinobu Utamura and Daisuke Takashima as creative directors, supported by Delphine Dubuet in the Netherlands and Renate Schwarz in Germany. Venanzio Arquilla, associate professor at the Design Department of the Politecnico di Milano, led the POLI. Design team’s input. After producing the English version, the textbook was translated and adapted for the Japanese edition.

The textbook has five chapters:

Chapter 1: The Value of Design Today
The meaning and evolution of design and its new roles and values
Chapter 2: Design Thinking and Its Evolution
The birth of Design Thinking: The four models and Fujitsu's approach to Human Centric Experience Design (HXD)
Chapter 3: Design and AI in the Age of Digital Transformation
Why digital transformation, the rise of AI, and the role of design on innovation with AI
Chapter 4: Envisioning the Future: Scenario-Building Techniques
A detailed description of the "futurology" scenario methodology for designing the future in this uncertain age
Chapter 5: Designing the Intangible: Services and Service Design Methodologies and Tools
Introduction to service design and its tools (user personas, journey maps, etc.)

Each chapter concludes with a summary of key takeaways. In addition, the book presents 10 case studies from Fujitsu initiatives around the world.

Your own way of use

Takashima and Utamura, creative directors of the textbook, encourage its use with the following comments:

Daisuke Takashima says: "Everyone has in their mind companies famous for their leadership in Design Thinking. This book helps show how we have been systematizing the development of Fujitsu's Design Thinking methodology over the last five years. This textbook is a good opportunity to learn more and understand Fujitsu’s specialist expertise."

Shinobu Utamura comments: “I am confident that Fujitsu is the first Japanese company to create a textbook by combining practical knowledge with global academic research. The book provides a variety of learning materials from a theoretical perspective, based on practical experience. Readers are enabled to appreciate the history of design as a design literacy and to use the book as a reference for unknown terms and concepts."