Analytics and the use of Big Data are giving business decision makers deeper insights into their companies and markets—insights that are becoming key to operating efficiently and competing effectively. But the need to manage large volumes of data is putting growing demands on the IT infrastructure, and making speed and high performance a critical issue.

To help companies succeed in this environment, Fujitsu has taken server performance to new levels with the April 2013 launch of the Fujitsu M10, its latest SPARC server. In the months following the launch, the new servers scored very well on a number of major performance benchmark tests—and as of August 30, 2013, they held 13 world benchmark records. Those results cover several aspects of performance, including CPU arithmetic performance, memory access performance and performance for Java and ERP applications.

As this long lineup of records shows, the Fujitsu M10 is designed to provide extreme performance for the wide range of applications being used by businesses today. And it delivers this leading performance across various configurations, from entry-level to large-scale configurations—meaning that it has the potential to fit a variety of companies’ needs.

Among other things, the benchmark records show that the Fujitsu M10 can provide high levels of response performance. For example, in the SPECjbb2013 Java application benchmark test, the critical-jOPS metric involves an environment that approximates actual working conditions in which time-to-respond is limited. Here, the result of 168,127 operations per second for critical-jOPS was more than seven times faster than the second-place result.

In another look at response performance, the Fujitsu M10 and a current x86-based server were both tested with the SAS business intelligence/business analytics application. With the same number of cores, the Fujitsu M10 completed processes in half the time that the x86-based server required. This high level of performance can translate to significant reductions in the amount of time it takes to produce analyses for decision support. 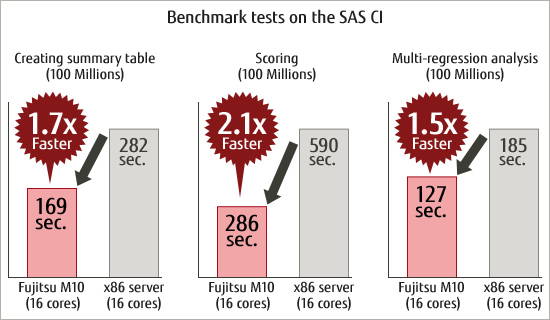 These benchmark tests from the laboratory provide an important perspective on performance—and they are backed up by experience in the field. For example, a Japanese company compared the performance of its existing server with the Fujitsu M10 in its data warehouse system, and found that response time with the Fujitsu server was 20 times faster than it was with the existing server.

Decision support is just one area that can benefit from the extreme performance provided by the Fujitsu M10. The new server is also designed to help companies cut time out of business operations. NTT DATA, a major systems integrator in Japan, participated in the Fujitsu M10 beta program, and tested the server’s performance in multiple batch database processing for sales details. The company found that the Fujitsu M10 cut elapsed time in those operations by 80 percent, compared with its existing high-end server.

“In recent years the utilization of information has become an important factor in the success or failure of our businesses. The need for high-speed processing of large amounts of data, such as Big Data, is dramatically increasing.

We believe the announcement of Fujitsu M10 gives us a solution that inspires confidence for our customers. We look forward to further accelerating the adoption of Fujitsu M10 into our IT infrastructure to match the Big Data era with high performance processing capacity.

The future is full of opportunities to greatly extend functionality and support customer business in new ways. We, NTT DATA, will use the exciting new technologies in Fujitsu M10 to drive the development of new IT solutions that in turn directly advance our customers’ business.”

The Fujitsu M10’s ability to deliver extreme performance stems from several key technologies that Fujitsu has adopted from the world of supercomputing. These include:

Looking ahead, one basic fact is clear—the amount of data that companies need to manage is going to continue to grow, and potentially push the capacity of many of today’s systems. The Fujitsu M10 addresses that issue with a modular building-block architecture and a core-level CPU Activation feature that enables fine-grained scaling of CPU performance in units of two cores—all of which means that the Fujitsu M10 can dynamically scale up to a huge, 2048-thread configuration to stay in step with a company’s growing needs. In essence, the Fujitsu M10 lets companies take advantage of this high-performance platform with a “pay as you grow” strategy, and add capacity as it is needed. This can help them optimize total cost of ownership while staying in step with the growing need to give decision makers timely, accurate information.

Overall, the results of all these recent benchmark tests underscore the Fujitsu M10’s ability to deliver the kind of performance needed to take advantage of Big Data—and help companies use data-driven decision-making to compete more effectively.

World records on SPEC int_rate2006, SPECfp_rate2006 and STREAM triad are based on comparisons of benchmark results except Supercomputers.

Details and the latest information on each benchmark can be found at the following websites: