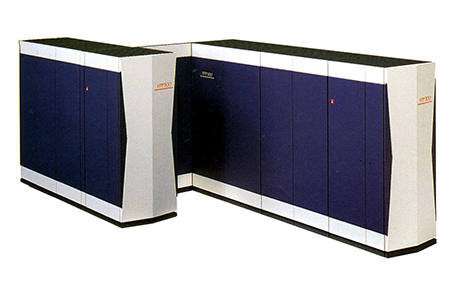 A supercomputer introduced in 1992, using a method known as a vector parallel system. This was a method employing parallel connections of processor elements (PEs) able to perform vector calculations, with a maximum performance of 355 gigaFLOPS when 222 PEs were connected. Gallium-arsenide LSIs were utilized in its processors. VPP Fortran was introduced as an extended language for this model to answer demands for the ability to easily write high-performance programs.
The VPP500 used the same technology as the NWT (Numerical Wind Tunnel), which was jointly developed by the National Aerospace Laboratory of Japan and Fujitsu and obtained the record for fastest in the world in the Top 500 rankings from 1993 to 1995.