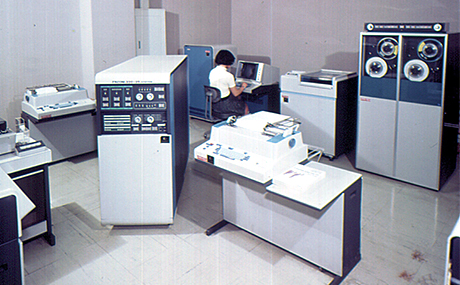 A new family series with enhanced network functions, which served as a successor to the previous FACOM230 series after 1968. In the FACOM230 "5" Series, the 3 models consisting of the medium to large-scale models FACOM230-25, -35, and -45 were introduced in 1968; the small-scale model FACOM230-15 in 1970; and the FACOM230-45S in 1971, which included enhanced functions of the FACOM230-45, together with the large-scale model FACOM230-55. All models in this series were designed with a basic policy incorporating the following points: (1) to achieve high-speed processing capacity, (2) to be equipped with disk files as standard configuration, (3) to be able to easily connect to communication lines, (4) to take thorough measures for price reduction, and (5) to ensure high reliability. This was an IC electronic computer series fully applying new technology based on the skill and technology which had been accumulated in the development of the FACOM230-60 and other models.