A success story for more than 30 years

A SUCCESS STORY FOR MORE THAN 30 YEARS

The developments that have taken place in high performance computing over the decades can be described quite simply: Without Fujitsu research, the development of the supercomputer would have been quite different.

Today Fujitsu is the most experienced and largest provider of HPC solutions in the Asian market, and has been a leading HPC vendor in Europe almost from the beginning, offering customers the know-how it has gained from installing more than 1,200 HPC systems.

In the 1970s Fujitsu started collaborating with its customers to fulfill many of mankind’s dreams – in aerospace technology, meteorology and astronomy, environment and energy, or in various other fields of enterprise research. A milestone in this long history was undoubtedly the FACOM 230-75APU, the first supercomputer built in Japan by Fujitsu in 1977. Since then Fujitsu’s commitment to high performance computing has become a success story that still continues with remarkable achievements in scalar and vector computing as well as cluster architectures. Outstanding examples of Fujitsu’s development include the Numerical Wind Tunnel (NWT), the world’s fastest vector computer launched in 1993, and the implementation of a Linux cluster in 2004 which was the most powerful of its kind in Japan at that time. In 2011 Fujitsu’s K computer, jointly developed with the Japanese Riken research organization, took the No. 1 position on the TOP500 Supercomputer List and defended this top ranking for many months until June 2012.

Fujitsu milestones in developing supercomputers for more than three decades 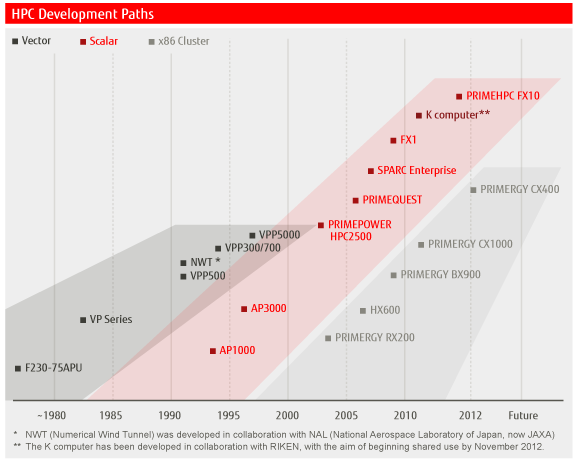