RIKEN, the Research Organization for Information Science and Technology (RIST), and Fujitsu today announced the completion and beginning of shared use of supercomputer Fugaku, which has been jointly developed since 2014 by RIKEN and Fujitsu.

On the same day, RIKEN and RIST have started to offer the system for shared use, providing access for a wide range of researchers and users in academic and industrial fields. 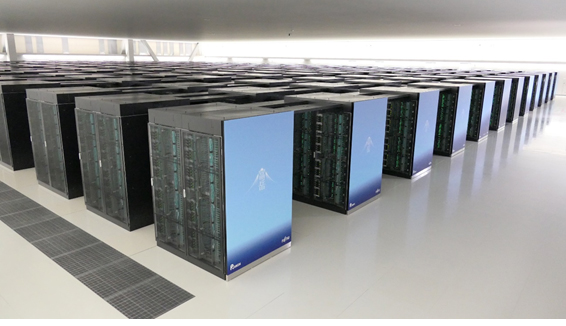 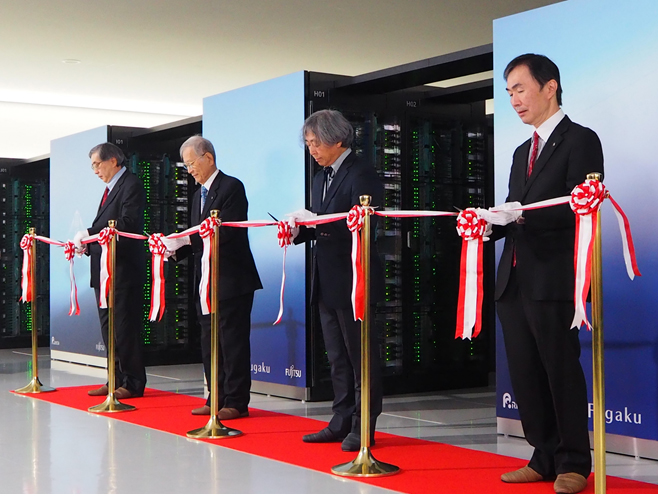 Fugaku is Japan’s supercomputer that has been developed as a core system for the innovative High-Performance Computing Infrastructure (HPCI) promoted by Japan’s Ministry of Education, Culture, Sports, Science and Technology (MEXT).

In 2014, RIKEN and Fujitsu began joint development of Fugaku and completed delivery of all racks in May 2020. Since then, they have developed and optimized the user environment in preparation for the commencement of shared use.

In the meantime, Fugaku has claimed the world’s top spot for two consecutive terms in June and November 2020 in four categories on the major high-performance computer rankings: the TOP500, HPCG, HPL-AI, as well as the Graph 500, and has been used on a trial basis under the “Program for Promoting Research on the Supercomputer Fugaku”, "research projects aimed to combat COVID-19", etc. since April 2020. In these trials, two projects, "Study on Large-Scale Numerical Fluid Simulation" and "Largest Ever Meteorological Calculation" have already been selected as the ACM Gordon Bell Prize finalists. In addition, research on "Prediction and Countermeasures for Infection by Virus Contaminated Droplet in Indoor Environment" has led to changes in people's lifestyles, and Fugaku is already making steady progress toward becoming a key technological platform for science and for building Society 5.0.

RIKEN and Fujitsu will continue to cooperate to ensure stable operation of Fugaku while contributing to the resolution of social issues and the acceleration of leading-edge research through the development of the world's best operation technology, the enhancement of the user environment, and the development and provision of various supercomputing technologies.

In addition, RIST, which is the Registered Institution for Facilities Use Promotion, has selected 74 projects for public use and industrial use in FY 2021 through an open call for proposals so that the “Program for Promoting Research on the Supercomputer Fugaku” can be continued, and a wide range of researchers, etc. can immediately start full-scale use after the beginning of shared use of Fugaku. Currently, RIST is calling for proposals in several categories, and researchers who are interested are invited to apply.

2. Use of Fugaku and future development

Fugaku has won four supercomputer titles for the second consecutive period in the world’s major high-performance computing rankings and is making full use of its outstanding potential to solve urgent social and scientific problems. With its outstanding computational power, Fugaku will play an important role in building Society 5.0, the Super Smart Society, through the following technologies.

Fugaku boasts up to 100 times the application performance of the K computer, allowing for simulations of "high resolution" "long duration" "large-scale" and "multiple case". It is expected to have various impacts ranging from solving familiar social problems to helping improve understanding of fundamental science.

The next generation of deep learning-based AI is computationally intensive and will require large-scale supercomputing resources. Fugaku’s CPU possesses high performance in "convolution operations," which are central to deep learning, and is connected by a network with superior communication performance, and it will be leveraged for AI and data science research.

Fusion of simulation and AI/data science

Fugaku makes it possible to combine simulation with AI and data science at the highest level in the world. For instance, AI can be used to search for parameters necessary for simulation and to extrapolate simulation results. Conversely, simulation can generate a large number of data for AI to learn.

The application of these methods with Fugaku will offer the following anticipated outcomes:

“This is just the beginning for Fugaku, and we are looking forward to seeing it truly demonstrate its tremendous potential. Above all, Fugaku is a key national technology, and we will manage it responsibly with the goal to achieve research results that will help build a long-lived and healthy society, disaster mitigation, and better energy use, with the ultimate goal to establish the government’s vision of an ultra-smart Society 5.0. In addition, we are aiming to provide researchers around the world with the best possible computing resources and usage environment.”

“The ultra-high-performance computer Fugaku is about to go into full-scale operation. I look forward to seeing this most powerful ‘external brain’ ever developed by humanity helping to expand our knowledge but enabling us to gain deeper insights into the foundation of matter in both time and space, giving us better structural and functional analysis of life, society, and industry, enabling more accurate predictions; and even designing the unknown future of humanity. RIST is committed to fulfilling its mission in maximizing the potential of the Fugaku facility while making it easy to use for a broad range of users.”

“Fujitsu is humbled to have played an important role in the development of Fugaku from its earliest stages, and we are very pleased to celebrate this important milestone. As the first supercomputer to win four awards in key world rankings, Fugaku has demonstrated exceptional performance in areas including big data analysis and artificial intelligence, as well as simulations, which are the traditional forte of supercomputers. In addition to these technological achievements, it is also important that Fugaku has great potential to make the world more sustainable. I very much hope that as we mark the start of its shared use, Fugaku will serve as a platform that empowers researchers to innovate and create new value, generating results that lead to the solution of various social and environmental challenges confronting the world.”

“In the decade since its initial conception, the Fugaku project has brought together Japan’s top talent in the area of supercomputing from industry, government, and academia, and they have carried out research and development with the goal of achieving both world-class application-first performance and versatility over a wide range of applications. Thanks to these efforts, Japan is a world leader in IT technology, including in the development of the most advanced high-performance general-purpose CPUs, and we have already achieved a number of results in applied areas, such as the struggle against COVID-19. Our center will continue to conduct research and development to strengthen Fugaku and to advance the future of computation. Fugaku will certainly play an active role as a core infrastructure for the building of Society 5.0 and to contribute to further progress in science, technology, and innovation.”