Fujitsu collaborates with organizations such as Japanese and overseas industry groups and forums as well as governments and international agencies, considering specific proposals aimed at resolving social issues and then implementing those proposals. In this context, we also pursue activities that relate to public policy and to the formulation and revision of legislation.

Japan will host the Rugby World Cup in 2019, the Tokyo Olympic & Paralympic Games (the Tokyo 2020 Games) in 2020 and the Kansai World Masters Games in 2021. Successive years of planning for these massive sporting events has sparked efforts across the industry, government and academic sectors aimed at ensuring that they are a success.

Fujitsu's involvement includes becoming, in February 2015, a "Tokyo 2020 Gold Partner" -- the highest domestic level in the Tokyo 2020 Sponsorship Program. In this role, Fujitsu will be supporting the success of the Tokyo 2020 Games as a datacenter hardware partner.

By bringing together ICT and sport with the focus on people, Fujitsu's goal is to help build communities in which everyone can live full and happy lives. Fujitsu understands the true power of sport as a vehicle for promoting the broader adoption of ICT by society through its customers, suppliers and regional residents. By resolving social issues in this way, we believe that we are stimulating growth toward a better future for Japan, and in turn, helping to create new business for ourselves and improve our corporate value.

At the Tokyo 2020 Games, the keys to success will be the work of the 100,000 volunteers planned for the event and the role of the Paralympics in promoting community participation by people with disabilities. Fujitsu is boosting its social contribution programs with the aims of cultivating a corporate volunteer culture and promoting diversity, working toward practical implementation at the Games.

In cooperation with the Business Community Conference for the Tokyo 2020 Olympic and Paralympic Games, Fujitsu is engaged in a range of volunteer programs, including trial sessions for wheelchair basketball and wheelchair assistance as well as cooperation with junior-high-school and high-school students in the drafting of accessibility maps. These maps indicate features such as steps in roads and pathways and the angle of incline on slopes, so that these elements can be taken into consideration by people pushing baby buggies or moving around in wheelchairs. These sorts of universal design initiatives are also examples of activities aimed at encouraging "Barrier-Free Minds".

Participation in the World Business Council for Sustainable Development (WBCSD)

The WBCSD (World Business Council for Sustainable Development) is a body headed by the CEOs of around 200 global corporations that aims to build sustainable communities through business activities. Fujitsu Chairman Masami Yamamoto has been serving as Vice Chair of the Council since January 2018, and Fujitsu is a member of this initiative and is active as a corporate board member for the People program and the Sustainable Cities & Mobility program. In the People program, we are progressing initiatives relating to business and human rights together with corporate efforts aimed at helping to achieve the United Nations' Sustainable Development Goals (SDGs). Through the Sustainable Cities & Mobility program, we are promoting mobility-related projects as part of the theme of sustainable urban transport systems. Through these initiatives, Fujitsu is working to resolve a range of issues in communities worldwide.

The workshop in progress

In July 2016, the WBCSD and Fujitsu co-hosted a workshop in Tokyo with the theme "Business Risk and Opportunities in the Era of SDGs". The workshop provided an overview of areas such as the knowledge accumulated by the WBSCD and its programs. It also provided a venue for discussions with experts on a range of topics, including approaches that will lead to ongoing enhancements to corporate competitiveness as businesses work to resolve social issues, as well as specific methodologies and issues.

Participation in the WEF

The World Economic Forum (WEF) is a not-for-profit foundation established by economist Klaus Schwab that engages in programs to improve the state of the world through cooperation between the public and private sectors in a spirit of global citizenship. It offers a venue for close collaboration among leaders from a diverse range of key international institutions as well as from the business world, government, academia and society, with the aim of shaping global, regional and industry-based agendas.

In January each year, the WEF holds its annual meeting in Davos, Switzerland. The Davos meetings bring together in one venue more than 3,000 leaders in their fields from around the world, including company executives, political leaders, intellectuals and journalists, to discuss the major problems confronting the world (Theme for the 2018 annual meeting: Creating a Shared Future in a Fractured World).

Fujitsu has participated in the forum since 2001, with representatives from various levels in the company - from executives down to the departmental level - engaging in a range of activities, including the Davos meetings. The annual meeting held in January 2018 was attended by Fujitsu's Representative Director and President, Tatsuya Tanaka, and Director, Duncan Tait. At a dedicated venue in central Davos, a discussion was held on 'Co-Creation through Technology' based on the Davos conference theme, involving global companies primarily from the United States and Europe.

Participation in the WEF Cybercrime Project

Fujitsu has been supporting WEF's "Cybercrime Project" which was launched in 2016. This project convenes workshops and other avenues for exchanging opinions and is aimed at boosting the world's capability to deal with cybercrime through private-public collaboration. The paper produced by this project, titled "Recommendations for Public-Private Partnership against Cybercrime (January 2016)", was supported by a total of 22 organizations and individuals (7 public sector, 8 ICT sector, 6 finance sector and 1 consulting firm), and Fujitsu was the sole supporter from Asia in this effort.

The 5th workshop was held in July 2017, and we took part in round-table discussions with people who are engaged in combating cybercrime on a daily basis. The members consisted of industry, government and academic parties. The workshop focused on "information sharing" and "enhancing response capabilities" as areas to target in combating cybercrime. There was discussion on topics such as methods and incentives for building public-private partnerships in order to achieve these goals. Input from Fujitsu included its plans to raise its response capability by enhancing its human resource development programs. This workshop was held in Singapore in conjunction with a symposium sponsored by Interpol, a WEF strategic partner (Theme: "Fostering Innovation for Future Security Challenges").

Cybersecurity is one of the key challenges confronting the world and must be dealt with through international cooperation. Fujitsu is committed to making an ongoing contribution to cybersecurity through this project. 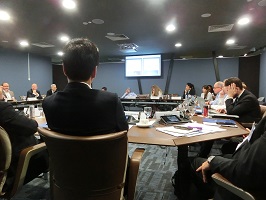 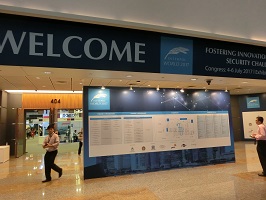 Among our efforts to establish international standardization for smart communities we have worked with the Japanese Mirror Committee and Steering Committee for ISO TC286 SC1 (Smart Community Infrastructures)-as well as the subordinate WG1 (Infrastructure Metrics) and WG4 (Data Exchange and Sharing) working groups-in order to promote a range of efforts including developing evaluation standards for smart community infrastructures and clarifying ICT roles for implementing smart communities. Since FY2015, Fujitsu has led efforts to standardize city evaluation methods using maturity models. In December 2017, this was issued as ISO 37153. Applicability evaluations and verification evaluations continue to be promoted in cities in Japan and overseas.

We have taken the lead in efforts to survey and publicize technologies and evaluation methods that contribute toward energy saving on ICT and using ICT for energy saving in society, through our efforts in the JEITA Environment Board which has continued where the Green IT Promotion Council left off in promoting green IT efforts in Japan. Within the Environment Board Green IT Promotion Committee, we have taken the lead in establishing more practical methods to evaluate environmental impact, and continue to contribute toward efforts to survey energy saving using the latest IoT technologies. In FY2018, we led efforts as Chair of the Green IT Promotion Committee in the subordinate IT/IoT Energy Saving Contribution Expert Committee, Energy Management Committee, and Datacenter Energy Saving Expert Committee. 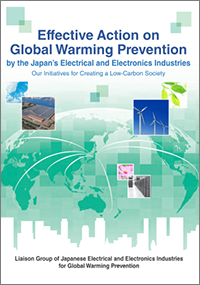 The Japan Climate Leaders Partnership (Japan-CLP) is a unique group of Japanese companies that was established under concerns for the health of the industry and the due to the understanding that proactive efforts were needed to implement a sustainable and low carbon society. Fujitsu has been a core member of this partnership which is leading efforts to combat climate change, since the organization was established in 2009. In addition to providing policy advice, meeting with relevant ministers, and participating in social gatherings with cooperating businesses, during FY2017 we also helped to submit documents such as written requests leading up to COP23 and written statements concerning Japanese plans to combat global warming. In November 2017, in addition to observing COP23 with other member companies and participating in related business meetings, we met with related organizations, companies, and government officials for discussion. We also participated in events related to preventing climate change in collaboration with the Ministry of the Environment and Ministry of Foreign Affairs, which received wide media coverage. Through this partnership, we have also planned discussion meetings with Minister of the Environment Masaharu Nakagawa, Minister for Foreign Affairs Taro Kono, the European Commission Climate Action Department, and The Climate Group (which organizes the RE100, EP100, and EV100* international business initiatives). 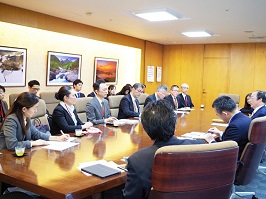 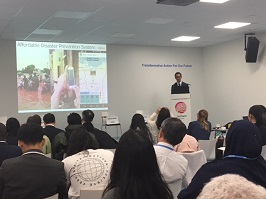 The Asia Productivity Organization (APO) is a group that works toward realizing sustainable social and economic development throughout Asia by increasing productivity, with the goal of improving productivity in the Asia Pacific region. As a member of APO, we continue to promote the spread of eco-friendly products under the Green Productivity (GP) Program. In 2016, Fujitsu was appointed Vice-Chair of the GP Advisory Committee (GPAC), and we continue to actively promote efforts within the program. During the Eco-products International Fair (EPIF) held in Ho Chi Minh City, Vietnam in May 2017, we worked together with Fujitsu Vietnam to exhibit and introduce energy management systems, environmental monitoring solutions, and liquid-immersed server cooling technologies. After the opening ceremony, many VIPs were seen at the Fujitsu booth during a VIP tour, which received wide media coverage.

Since March 2018, Fujitsu has served as GPAC Chair and has taken the lead in expanding the scope of efforts from improving green productivity to focusing awareness on improving productivity in order to achieve Sustainable Development Goals (SDGs) set by the UN.