Fujitsu uses PZT (lead zirconate titanate) as a ferroelectric material in our FeRAM. The crystalline structure of PZT is shown in the figure on the right.

The zirconium or titanium positive ion occupies two stable positions in the lattice, and can be moved between the positions by applying an external electric field. Since the two stable positions are slightly displaced from the charge center, electric polarization with two opposite direction, up or down in the figure, appears in the ferroelectric material.
Either up or down polarization can be stored even if the electric field is removed and can be switched between each other if the opposite field is applied.

Switching the polarization direction by applying an electric field to rewrite the data is generally much faster than the rewriting speed of floating gate memories, such as EEPRAM and Flash memory, which use electron tunneling through silicon dioxide film by applying high voltage for data rewriting. 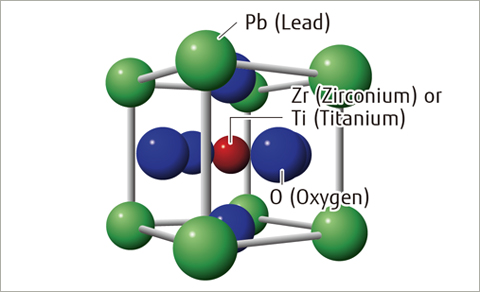