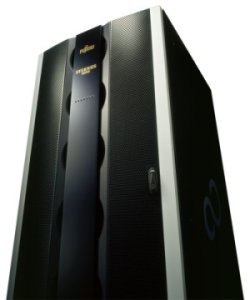 The Model 2100 (the top-end product within the ETERNUS 8000 range) offers a storage capacity of 1.36 petabytes (PB)* – higher than any other storage system available today. Running on 16 processors each rated at 3.6 GHz, the Model 2100 offers throughput performance that is approximately 2.5 times faster than that the Model 1100, which was released by Fujitsu under the earlier ETERNUS 6000 product line.

The Model 2100 can be connected to servers by as many as 128 paths, and can accommodate up to 256 GB of cache memory and eight controllers, thus giving it approximately double the scalability of current models. In addition, it uses high-speed fibre channel server interfaces for a maximum data rate of 4 gigabits per second (Gbps).

The ETERNUS 8000 offers 128-bit encryption to eliminate information leaks even when the drives are physically removed, for enhanced security.

The ETERNUS 8000 is designed to make a complete copy of the source data only during the first disk-to-disk backup. During subsequent disk-to-disk backups, only changes to the source will be copied. This is a fast backup method and also allows for smaller backup volumes, and is an efficient approach to double-redundant backup for file servers.

The Model 500 and Model 300 offers all the key features found in the ETERNUS 8000 product line, for supporting mission-critical operations based on open systems. Such features include:

The Model 500 (the top-end product within the ETERNUS 4000 range) provides a pair of dual-core processors each rated at 2 GHz, giving the system approximately 1.5 times the I/O processing performance of the ETERNUS 8000 Model 700.

In addition, the Model 500 offers 16 interface paths to servers and up to 32 GB of cache memory, for large-scale storage integration.

Fujitsu Asia Pte Ltd was established in Singapore in 1997 to provide leadership in business development, technology innovation and customer support as regional headquarters for the Fujitsu group of companies in Asia outside of Japan. Building on Fujitsu's three decades of experience in Singapore and the broader Asian region and with a pool of highly skilled engineering talent, Fujitsu Asia is dedicated to providing comprehensive integrated IT, telecommunications and networking solutions that deliver tangible business value and enable customers to meet the challenges of the new global economy. Fujitsu Asia is a wholly owned subsidiary of Tokyo-based Fujitsu Limited (TSW: 6702), a leader in customer-centric IT and communications solutions for the global marketplace.
For more information, please see: http://www.fujitsu.com/sg/