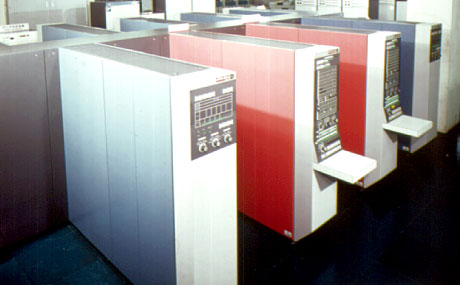 A computer making full use of monolithic IC, equipped with multi-processors, completed in 1968. Not only did the FACOM230-60 have a processing capacity 4 to 10 times faster than the FACOM230-50, it was a general-purpose large-scale computer boasting the highest performance of all domestically-produced machines at the time, with greatly augmented online data processing functions. After its introduction, it was installed in the large-scale calculation centers of many different locations including Kyoto University, Kyushu University, Hokkaido University, and Nagoya University. It was also used for a wide range of applications such as subscriber data telecommunication operations by the Nippon Telegraph and Telephone Public Corporation, and online banking systems for Dai-ichi Bank. In 1970, Fujitsu had the great honor of receiving the "Award for Persons of Scientific and Technological Merits" for that year, as the development of the FACOM230-60 was considered to have been a great contribution to the development of technology in Japan.