We take part in a variety of Sponsorship activities. 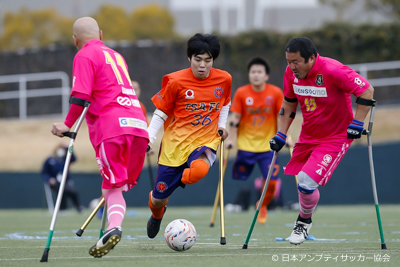 We collect the used books and CDs, etc. lying around in the house or office, which will not be read or listened anymore, and donate the sales to the NPO, JEN (Japan Emergency NGO), who organizes the BOOK MAGIC. The fund earned from the donated items is used to build schools in the developing countries.
We've joined this activity since FY2014, and ever been able to donate totally about 235,000 JPY. (As of the end of March 2022.)
Incidentally, in June 2017, we received a letter of thanks from the NPO. 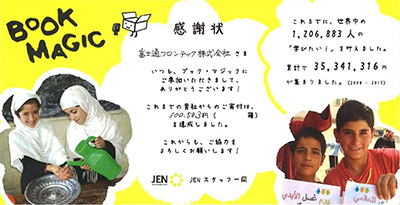 The letter of thanks

Since 2005, we have continuously collected used postal stamps and unused postal cards, etc., and donated to a foundation named "The Defense of Green Earth Foundation" once a year. The fund earned from the donated items is used to help tree-planting activities in Asia and Africa, where deforestation is very significant. 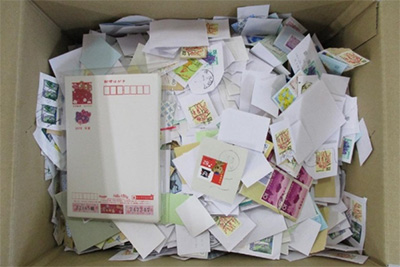 Donations of Ring-pulls for Wheel Chairs

In Headquarter Branch of Fujitsu Frontech Labor Union, we collect ring-pulls of drink cans, and donate them to the NPO named "Ring-pulls Recycling Network", by participating in the activity of Fuji Electric Labor Union. Donated ring-pulls are sold for recycled resources, and the fund is used to purchase wheel chairs, which are donated to councils of social welfare, etc. in local community. 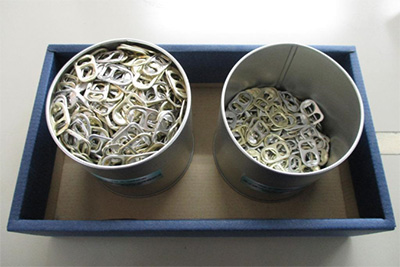 Delivery of Vaccines with PET-bottle Caps

We have continuously participated in the activity of collecting PET bottle caps, that an NPO named "Re Life-style" sponsors.
Collected caps are sold by way of the NPO, and the money is spent for vaccines to save children living in struggling countries.
Since starting this activity in November 2015, we have been able to donate totally 886,000 caps which are equal to vaccines of 1,777 people. (As of the end of March 2022.)
Incidentally, Fujitsu Frontech Limited received a letter of thanks from the NPO in July 2016, and Fujitsu Frontech Systems Limited (FJFS) also received it in July 2017, as a result of our efforts. 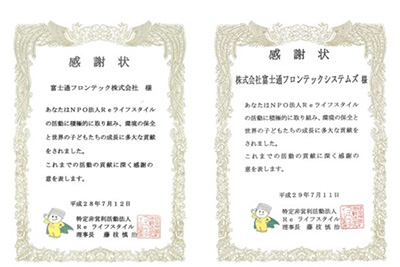 The letters of thanks

In our Niigata Plant, we have continuously implemented the fund raising every year since FY2007, to support "Green Fund" activity sponsored by a public interest incorporated association named "Niigata Green 100-year Tale Promotion Committee". We provide the employees who donated, with the seeds of bitter melons and morning glories which have grown in "green curtain", in return.
And, Totalizator Engineering Limited (TEL), our Group company inside Japan, has continuously supported "Green Fund" sponsored by a public interest incorporated association named "National Land Afforestation Promotion Organization", since FY2002. TEL has ever donated totally 323,780 JPY. (As of the end of March 2022.) 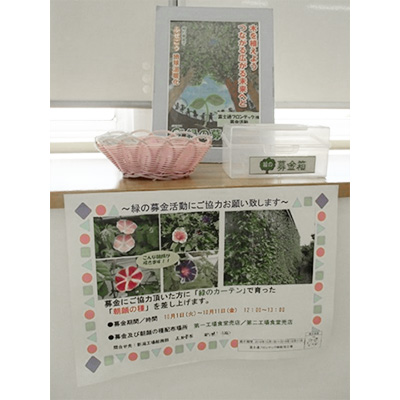 Fujitsu Frontech Systems Limited (FJFS), in time of replacing into new PCs, not discharges old PCs but donates to welfare facilities for people with physical disabilities, etc. within Maebashi-shi, Gunma Prefecture, in the purpose of utilization of PCs in the local community.
Incidentally, in March 2018, FJFS received a letter of thanks from Council of Social Welfare of Maebashi-shi, because of this effort. In addition, it also received letters of thanks from totally 21 welfare facilities, because of donating 1,700 dotch files in FY2018. 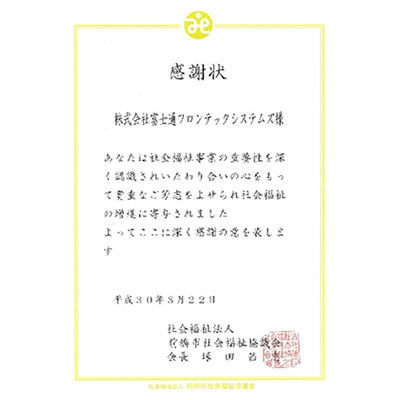 The letter of thanks