Business evolved: survival of the fittest

Technology may be recognized as the great enabler for organizations seeking to thrive in a digital world, but it is not the catalyst for disruption.

For 45% of respondents, customers are seen as the most influential force outside of their organization driving their response to digital disruption. This compares to around 31% who say the same of competitors, while less than a fifth specify partners and third parties (18%) or shareholders and citizens (5%).

With customers and new competition driving digital disruption, many business leaders worry of the consequences of failing to meet new customer demands and falling behind.

A new speed of innovation

Much of the concern seems to originate with the idea that the pace and scale of change are almost impossible to keep up with.

Business leaders say that digital disruption has helped to drive more innovation (56%), but also increased competition (46%) and created a faster pace of change (42%) as well.

As such, 71% of those surveyed say digital disruption means organizations need to innovate faster in order to remain relevant.

Competition is fiercer and more diverse

While respondents say that their digital agenda is driven primarily by their customers, they also acknowledge that their competitive base itself is shifting as a result of digital disruption. Although 32% of business leaders say that digital disruption in their sector is being driven by an established industry player, 29% say that it is as a result of an established organization entering the market from outside.

Not only are organizations faced with out-innovating their traditional competition in order to stay relevant, they now need to keep pace with - or, ideally, outpace - new challengers from adjacent industries.
The majority of organizations may have taken steps to safeguard their long-term success, but their journey is far from over.  Many believe they need a digital partner to help them take the next steps.

Discover the benefits of co-creating with partners >> 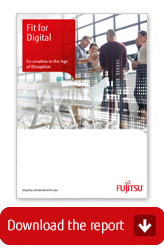 Find out more about digital transformation