Until now, Japanese companies doing business in Vietnam have had no option other than to entrust distribution to local companies, which has provided little opportunity to take the initiative to make improvements. Under this agreement, the partners will build a system for capturing data from contracted local carriers, including vehicle infrastructure and trip logs. This data can then be used by the shared distribution-information system to plan vehicle dispatching more efficiently and track progress, with the aim of improving vehicle utilization and vehicle capacity utilization, in addition to reducing distribution costs. Fujitsu Vietnam and Acecook Vietnam will encourage use of this system in Vietnam by Japanese companies, and Fujitsu and Acecook will evaluate its effectiveness in other ASEAN nations, such as Myanmar, to help improve distribution throughout the ASEAN region. 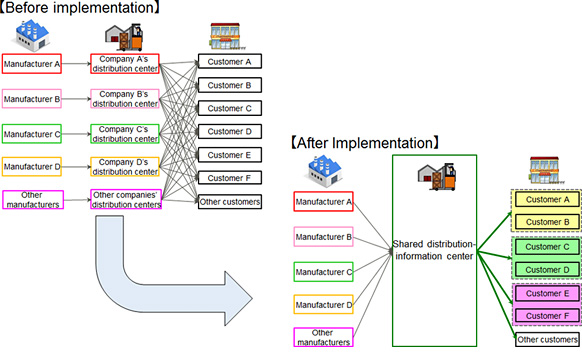 With Vietnam and other economies in the ASEAN region attracting attention as growth markets, more and more Japanese companies are looking at doing business there, but distribution is entirely in the hands of local companies. Carriers in Vietnam manage nearly all their data management, including dispatch planning and logistics, by hand, and Japanese affiliates receive only notification of a delivery, with no way to make improvements on their own initiative.

Acecook Vietnam moves some 3 billion instant-noodle meals per year, giving it Vietnam's leading share of revenue in that market. To service this demand, the company has seven distribution centers throughout the country, from which 400-500 trucks make deliveries every day. The ability to make plans and give directions to efficiently carry the most products with the fewest trucks, and to track the delivery status of trucks in real time, including their locations and progress, would reduce costs and increase the quality of the distribution process.

To address these issues, Fujitsu and Acecook have agreed to build a shared distribution-information system that will bring low-cost, high-quality distribution to Vietnam.

Fujitsu has been providing systems for front-line support to the distribution industry since the 1990s, and has deployed these systems to some 550 companies. Today, it gathers and analyzes data generated in the field to help its customers optimize their logistics operations. For this project in Vietnam, Fujitsu is building a shared distribution-information system based on its own FUJITSU Logistics Solution Logifit series, which will be operated by Fujitsu Vietnam.

Acecook Vietnam will collaborate with Fujitsu in developing the shared distribution-information system, and will begin trial operations in June 2016 to assess its use in Ho Chi Minh City. Acecook Vietnam will confirm the system's ability to prepare efficient dispatch plans for product deliveries, to track delivery status, and to control distribution costs, and will use the system to increase vehicle utilization and vehicle capacity utilization, as well as to reduce distribution costs.

After the system has been tested for practicality, Fujitsu Vietnam and Acecook Vietnam will seek Japan-based companies to use the system, and will offer the system jointly.

This system, prioritizing load and delivery conditions, will determine optimal routes based on data such as shipment instructions, recipient requirements, and road information, and will automatically generate dispatch plans optimized to increase vehicle utilization and vehicle capacity utilization. In addition, smartphones carried by drivers will update the system on their location and status so that Acecook Vietnam can track their progress in real time and give directions as appropriate. This will result in efficient deliveries based on optimized dispatch plans and higher quality distribution, with more accurate delivery time windows and fewer delivery errors.

While the current system in Vietnam has each plant or center handling vehicle allocation individually, this system will centralize that process to generate plans that increase round-trip capacity utilization and increase vehicle utilization, avoiding wasteful vehicle allocations and reducing distribution costs. 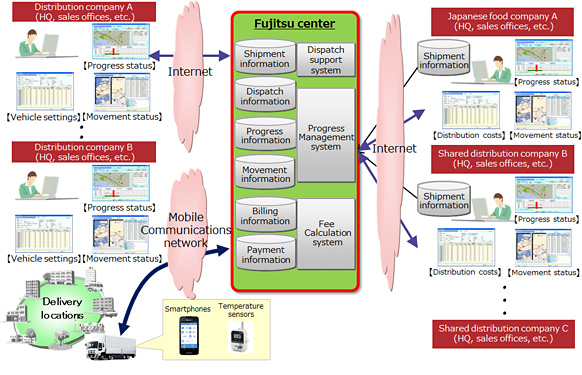 Fujitsu Vietnam and Acecook Vietnam will test the effectiveness of this system, with the goal of incrementally rolling it out starting in March 2017.

Building the shared distribution-information system based on the massive quantities that Acecook Vietnam delivers, the system is expected to reduce the cost of distribution for Acecook Vietnam's distribution and make it more sophisticated, and to attract widespread use by helping solve some of the issues faced by other Japanese-operated companies doing business in Vietnam.

Furthermore, Fujitsu and Acecook will study the potential for bringing the system to Myanmar and other ASEAN nations.