Mountain View, CA, October 11, 2017 – At the Fujitsu Laboratories Advanced Technology Symposium, Fujitsu Laboratories of America, Inc. (FLA) and Fujitsu Laboratories Limited (FLL) today announced the availability of new technology to automatically generate patches for bugs in object-oriented programs, which are typically used for business application software development. This technology uses machine learning on a corpus of all archived bug reports and bug patches to reduce the average time to diagnose and fix single-fault-location bugs by 28.8% compared to the conventional heuristic-search-based patch generation technology and manual patching.
Currently, debugging and patching of software bugs, which is mainly performed manually, consumes a disproportionately large fraction of software development resources. This constitutes a significant drag on the growing influence and penetration of software applications and requires automated solutions. However, conventional automatic patch generation techniques have limited scope since they cannot handle bugs with large number of candidate patches.
The announced technology uses machine learning to accurately rank the space of candidate patches, prioritizing the most relevant candidates, and thereby enabling the generation of the correct patches. Therefore, bugs outside the scope of conventional auto patching techniques can now be patched in minutes, rather than hours or days of manual patching.
FLA and FLL plan to further refine the use-cases and target markets for this technology, including conducting field trials and further improvements to the technology, with an aim to release it as a services-based product in FY2018 from a Fujitsu business unit.

Currently, software maintenance is performed manually and is therefore time-consuming. Research studies have reported that software developers spend as much as 50% of their programming time for identifying and fixing bugs. The Defects4J benchmark dataset is a collection of several bugs from popular, object-oriented, open-source software (OSS) programs, which are typically used in business application development. We investigated 20 method-invocation related bugs (discussed below), with trackable bug repositories, from Defects4J, out of 49 single-fault-location bugs, and found that it took the development teams an average of 17.1 days to fix each bug. Bug fixing is not only time-consuming but ultimately an issue of development cost. For instance, market research studies reported the global cost of fixing software in 2013 as $312 billion.
Therefore, automatic patch generation technologies, which aim to make bug fixing more efficient, are expected to gain wide acceptance. While the ultimate goal is the complete automatic repair of bugs of all complexities, the current focus of the research community is primarily on automatic generation of single-line patches, i.e., automatically patching single-fault-location bugs.

Business applications are typically implemented using object-oriented languages, such as Java. Our investigation on a set of large-scale OSS Java projects, which are often used as benchmarks by the academic community, showed that as many as 30%-40% of the bugs are related to method invocations. In fact, 29 out of the 49 single-fault-location bugs (59.2%) in the aforementioned Defects4J dataset are method-invocation related bugs. Thus, method-invocation related bugs constitute a significant fraction of single-fault-location bugs and urgently merit a solution. However, patches for such bugs typically have a large search space, often with several hundred candidate patches. Effectively searching this candidate space requires new technology for ranking the candidates, prioritizing the ones most likely to be the correct patch.
Conventional techniques, such as the heuristic-search-based automated repair tool ACS, essentially do not fix method-invocation related bugs, and can correctly fix only 6 out of the 29 (20.7%) single-fault-location method-invocation Defects4J bugs, and overall only 14 out of the 49 bugs. By contrast, our technique, presented below, fixed method-invocation bugs and generated 15 correct patches (51.7% and 2.5 times the above-mentioned conventional techniques) out of 29 bugs, and overall correctly fixed 26 out of the 49 bugs.

Our technology targets single-fault-location bugs in object-oriented programs, which are typically used in business application development. We have developed an automated patch generation technology for bug repair that employs machine learning on a corpus of all archived bug reports and bug patches. In particular, the system supports generation of patches involving method invocations. Out of 29 method-invocation related, single-fault-location bugs, in the Defects4J benchmark dataset, our system generated 15 correct patches (51.7%, 2.5X compared to the aforementioned conventional techniques).
The features of the developed technology are as follows:


1. Automated patch generation technology
The automated patch generation AI engine, as shown in Figure 1, consists of a bug localizer, a patch candidate generator, as well as candidate ranking, and test validation. Specifically, given a source code with a bug, first the bug location is diagnosed, and then patch candidates for the bug at the diagnosed location are generated.
Since the number of patch candidates can be large, often in the several hundred, these patch candidates are ranked in decreasing order of their likelihood of being the correct patch. Subsequently, the highest ranked candidates are validated by checking if they pass the test cases. The first candidate that passes all test cases is recommended as a potential patch for the bug. 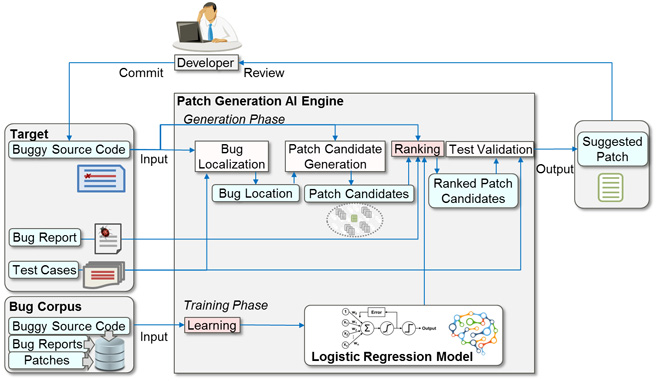 
2. Ranking technology based on machine learning on corpus of archived bug reports and bug patches


To identify the most promising candidates among a large number of potential patch candidates, we use machine learning on previous bug reports and bug patches.


By focusing on new aspects such as bug reports and the buggy code surrounding the patch, method-invocation related bugs can be effectively supported and the patch generation precision could be improved significantly compared to the conventional techniques, as mentioned above.

FLA and FLL will discuss this technology with business units, targeting both business applications and OSS, refine and prioritize the targets and use cases, conduct trials and improvements internally, with an aim to release it as a services-based product in FY2018.

Founded in 1968 as a wholly owned subsidiary of Fujitsu Limited, Fujitsu Laboratories Limited is one of the premier research centers in the world. With a global network of laboratories in Japan, China, the United States and Europe, the organization conducts a wide range of basic and applied research in the areas of Next-generation Services, Computer Servers, Networks, Electronic Devices and Advanced Materials. For more information, please see: : Fujitsu Laboratories