We have begun to take thorough actions on climate change, by establishing our own target to reduce GHG emissions (*1), in the wake of "Kyoto Protocol" adopted in 1997 and our acquisition of ISO14001 Certificate in 1998. After that, in response to "Act on the Rational Use of Energy" revised and reinforced in April 2010, and to power savings requested by the Government of Japan due to "Great East Japan Earthquake" on March 11, 2011, we reviewed and reinforced the actions on climate change drastically, for instance, by establishing our expertise committees of energy savings.

Recently, we have entered a new phase to realize "the goal of bringing the Fujitsu Group's CO2 emissions to zero by 2050, as well as contributing to the achievement of a decarbonized society and the adaptation to climate change", based on the targets as Fujitsu Group which were verified by "SBTi (Science Based Targets initiative)" (*2) in August 2017, and on the Fujitsu Group Medium/Long-term Environmental Vision "FUJITSU Climate and Energy Vision". 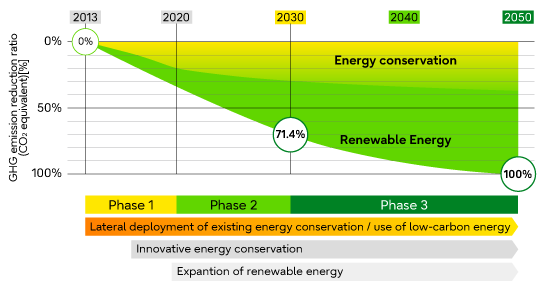 The Progress of GHG Emissions Derived from our Business

In the purpose of hitting the target in FUJITSU Climate and Energy Vision, we strive to reduce GHG emissions in and outside Japan, including the introduction of renewable energy (RE), LED lightings and fuel cell power generators. As a result, we could reduce 2,458 tons-CO2 (-22.3%) compared to FY2013 in FY2021.

Progress of GHG Emissions (In and outside Japan)

[Explanation about the bar graph]

We made a plan of "To introduce renewable energy in sites to 40% of all purchased electricity in our Group by the end of FY2030" to achieve RE100(*3) that Fujitsu Group participates in, and have just started forward-looking actions since FY2021. In Japan, we introduced RE which was equivalent to about 4% of total electricity use in the whole Group, and outside Japan FDTP also switched full volumn of electricity consumpted in Plant 2 to RE, in FY2021.

In each site and each Group company, we make efforts to switch to LED lightings whose electricity consumptions are very few, with the result that they lead to reduction of a great amount of GHG emissions. Especially, FDTP, one of our Group companies outside Japan, has already finished replacing all the lightings with LED ones as of February 2018. 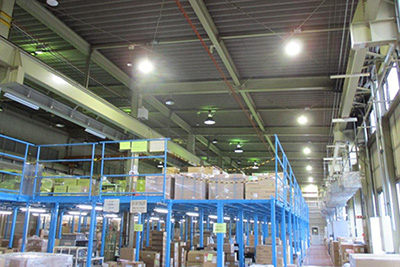 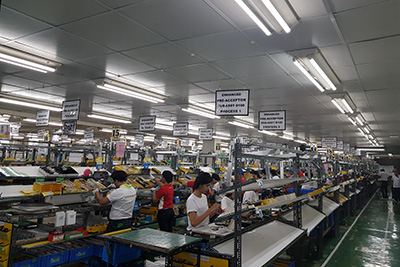 Introduction of LED lightings in the Plant (FDTP)

In Headquarters / Tokyo Plant, we replaced large environmental test chambers to assure the quality of developed products, with recent models whose energy efficiency is about only 50% of electricity consumptions compared to conventional ones, during the period from FY2018 to FY2019. This replacement enables us to reduce a large amount of GHG emissions (-25% or so) in the whole site.
In Niigata Plant, we optimized the number of power-transformers on the rooftop as well as replaced them with new ones whose loss of energy conversion is very few, in 2018.
In Kumagaya SSC, we have started operating solid oxide fuel cell (SOFC) generators, which are eco-friendly since 2020. This system enables us not only to generate about 50% of electricity consumed there, but to reduce a large amount of CO2 emissions compared to the case if we procure 100% of electricity from an electric power company. 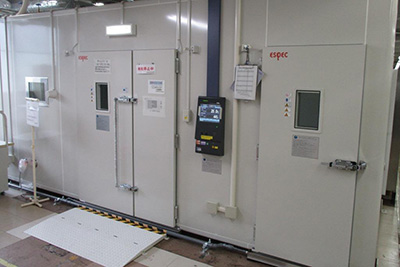 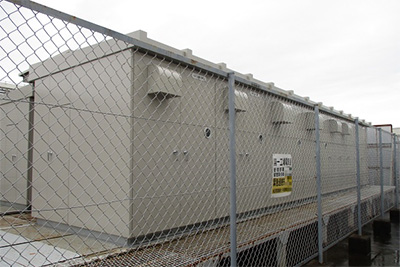 Besides replacement of facilities, we also improve our facility operation for energy savings.
For example, we do cover high temperature burn-in facilities to assure the quality of products before shipping, with aluminum insulation materials to confine released fever inside. This way enables us not only to control the operational frequency of attached air heaters, but to control the rise in room temperature during summer season, because the temperature within the facilities is kept in a certain degree. 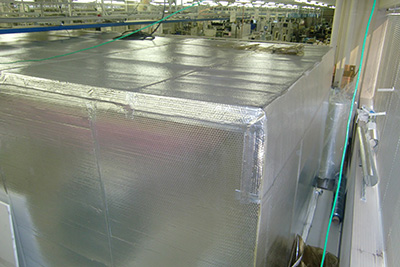 In Headquarters / Tokyo Plant and Niigata Plant, we establish "Energy Saving Committee" each other, which consists of representative members appointed from among each division, to hold the meeting on a regular basis. Through the meeting, for instance, we review, determine and implement the measures against some issues relevant to energy savings. And, we implement the PDCA Cycle appropriately by reviewing the effects, so that we can revitalize our energy saving activities.

As one of energy saving activities, we implement "energy saving patrol" regularly in both summer and winter season, to keep in good condition, preset temperature of air conditioners on each floor. As a result, it contributes to saving energy. 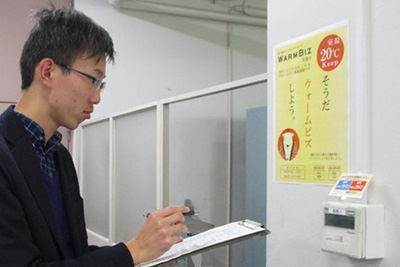 As another of energy saving activities, we also make positive efforts to come up with creative displays, in the purpose of raising employee's awareness of energy savings. For instance, we create "Sticker for the proper preset temperature of an air conditioner" and "Poster for awareness with a digital thermometer" to display within offices. 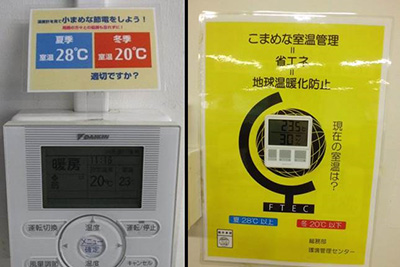 Awareness of energy saving with displays

On the grounds that it is not sufficient only to reduce CO2 emitted from our sites as actions on climate change, we are making efforts not only to grasp our value-chain emissions (from Scope 1 through 3), but to reduce emissions in Scope 3 (CO2 emitted from other companies, which are associated with us), as well.

Increase of energy efficiency of products

Because of comparatively high emissions rate of Category 11 "Use of sold products" in Scope 3 per total emissions in our whole supply-chain, we establish a target to reduce CO2 derived from product use, and make efforts to increase energy efficiency of products we develop.

FFNA, one of our Group companies outside Japan, has been taking part in "SmartWay Partnership®(*4)" since 2009 that U.S. Environmental Protection Agency (EPA) operates, and trying to improve the energy consumptions of freight transportation in North America region involved by FFNA.
FFNA strives to reduce the energy use during transportation through some measures mainly including the utilization of freight trucks which acquired certificates of good environmental performance from EPA and the strategic adoption of 3PL (Third Party Logistics *5) to pursue more efficient transportation routes.
Incidentally, Niigata Plant, which is one of our Group sites in Japan, also makes an effort to reduce transportation CO2, through the improvement of transportation efficiency such as adoption of fuel economy trucks and pursuit of better trucking efficiency. 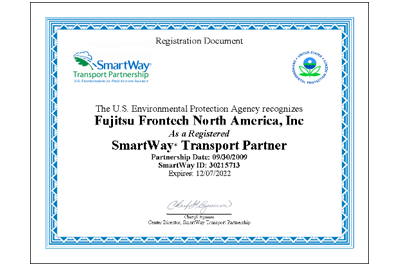 Participation in the events of local government

In Niigata Plant, we have participated in "Eco Office Award Initiative" sponsored by Niigata Prefectural Government, continuously since FY2016. Through this initiative, we make an annual plan to reduce CO2 emissions and submit to the government. And, after finishing 1-year actions based on the plan, we report on the results.
Incidentally, we won the prize named "Certification of Eco Office in Niigata" from the government in November 2019, because of us addressing the reduction of GHG emissions in FY2018. 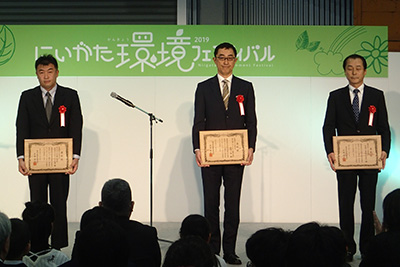 In Headquarters / Tokyo Plant and Niigata Plant, we create "green curtains" to mitigate the burden of air conditioners by preventing solar heat from penetrating walls directly. 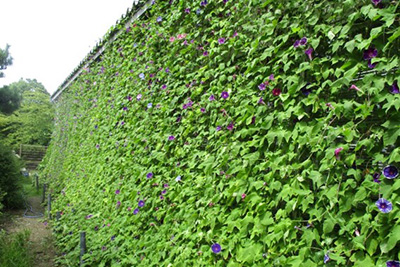