SPARC Enterprise M3000 models and above, are monitored and administered by the eXtended System Control Facility (XSCF) incorporated in each server cabinet. XSCF incorporates a service processor separate from all other processors.

XSCF regularly monitors server components including CPU, memory, disks, fan rotation and device temperatures. Monitored information is stored in the XSCF. OS failure doesn't affect XSCF operation as it is fully independent of the operational server architecture. Configuration and administration of partitions and server resource switching can also be performed from XSCF.

XSCF can be operated by Web browsers, not only by command line. Communication between server and XSCF console is encrypted and protected by SSL and SSH. In SPARC Enterprise M8000 and M9000, continuity of system monitoring is assured through redundant XSCF mechanism.

The accurate and timely server status obtained by XSCF lessens the load on system administrators and reduces administrative costs.

Errors in server cabinets are notified and stored in the XSCF. System administrators monitor and administer server status via a PC connected to the XSCF by LAN.

Server monitoring from a remote site via LAN is possible. Data encryption and protection, by supported protocols such as SSL and SSH, secures total data transmission between the server and the administrator. Plus, SNMP protocol can be used.

You can select suitable XSCF functions for your system operation.

Through Web browsers, server statuses including component statuses or temperature can be monitored, and server operations including power –on/off are possible.

Notifications can be sent to a mobile phone or PC by E-mail when an error occurs in a server. Even if the system administrator is in a remote location, he/she can obtain timely monitoring information and take swift action to resolve errors. 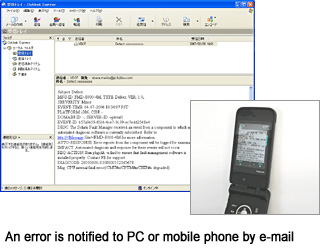 Collaboration with system management software such as Server System Manager or Systemwalker enables multiple servers to be managed from a single console.

Access permission to XSCF operations can be controlled at a fine-grain level by XSCF user account. For instance, a user account with permission for server monitoring but veto on power control is protected from possible mistaken power-off operation.

Hardware Partitions can be configured, monitored and operated including Dynamic Reconfiguration through XSCF. High security and manageability of SPARC Enterprise hardware partitioning are assured by independent accounts management per partition.

The newest firmware programs can be downloaded from relevant Web page.