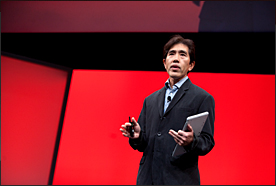 Goro Watanabe, Senior Vice President of Fujitsu Management Services of America, Inc. took the stage at the Executive Solution Session at Oracle OpenWorld 2011. With his long contribution to progress in SPARC and Oracle Solaris, he was the right person to introduce Fujitsu’s technology for natural disaster mitigation, SPARC64 processors, and the interconnect technologies used in the K computer.

Japan’s Recovery and the World’s #1 Supercomputer

The Great East Japan Earthquake with the worst ever earthquake magnitude of 9.0 generated a huge tsunami that also resulted in a nuclear power plant disaster.

In the first half of his session Watanabe introduced a range of technologies being used in natural disaster mitigation, including brand-new Fujitsu datacenter facilities, Fujitsu earthquake warning systems, and emergency breaking systems for Shinkansen (bullet trains) developed and deployed in Japan. 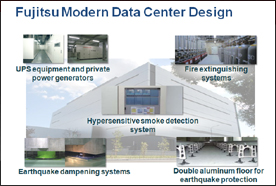 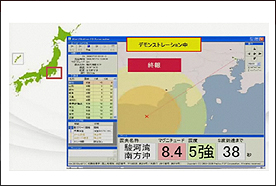 In particular, he explained the three mindsets used in dealing with natural disasters.

He continued that the most important thing is “Human” – helping each other is the key point for overcoming disaster.

The second half of the session introduced the K computer on which RIKEN and Fujitsu worked together to develop. Starting from “what is a supercomputer?” Watanabe explained why the SPARC processor was a key factor in achieving World’s #1 performance. Then he went on to talk about the future of supercomputers. Performance of the K computer

Designed to achieve LINPACK performance of 10 petaflops (10 petaflops = 1016), the K computer’s performance is equivalent to approximately 100,000 PCs. If a human conducted a corresponding mental calculation, it would take 30 billion years.

Watanabe picked up three factors that ensured the successful performance.

First, Fujitsu processors and Green technology inside the K computer were essential. Based on its high-performance and highly reliable SPARC64 VIIIfx processors and water-cooling technology, the K computer also recorded a high performance in the Green500, which is a ranking of the most energy-efficient supercomputers in the world. The result is great efficiency with ultra-high performance and an ecologically sustainable footprint. 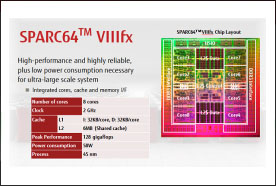 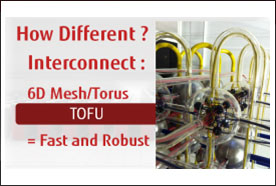 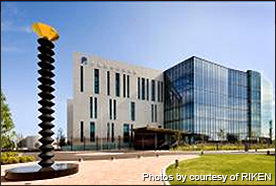 For further details on the K computer, please visit http://www.fujitsu.com/global/about/tech/k/

You may be aware that most systems in the TOP500 are dominated by Intel processors. Your natural question might then be, “why SPARC, not Intel?” 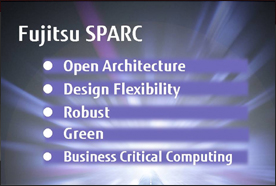 Here are answers to “Why SPARC for supercomputer?”

Here are answers to “Why SPARC for supercomputer?”

After Watanabe talked to audience on “Why SPARC, why not?” he explained outstanding points of SPARC processor such as the openness of SPARC architecture, its flexible design by Fujitsu, and its high reliability. He strongly stressed the uniqueness of the SPARC processor based on the motto that competition is the key to innovation.

SPARC64 VII+ processors with the same common architecture as SPARC64 VIIIfx are the essence of SPARC Enterprise servers which Fujitsu and Oracle work on together.

The future of supercomputing

The progress of supercomputers places our future in front of us. For instance, new medicines and safer car designs will save millions of people’s lives. Simulations for such products or technologies are not possible even by connecting huge numbers of servers or PCs. Extreme parallel computing using supercomputer is necessary for such simulations. Such a future can only really come true with the help of supercomputers. 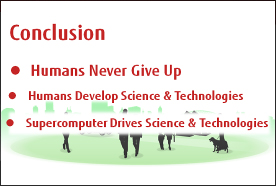 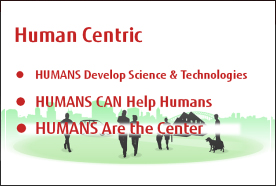 Since the advent of civilization, humans have been struggling to sustain and improving their living conditions and culture while natural disasters washed away our ancestor’s lives again and again. Science and technology including supercomputers able to support our lives are the fruits of this ongoing struggle. What remains unchanged is the human centric spirit.