Gaining a Broader Understanding of Leadership 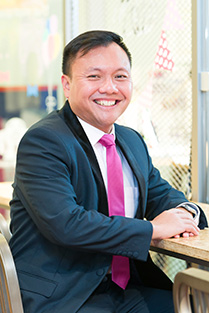 Noriman Ali Salam has just completed the Global Leaders for Innovation and Knowledge 2017 Spring Course. Noriman appreciated the multi-campus and multi-faceted learning of the program, and was particularly impressed by how his understanding of leadership expanded to include empathy, a broader consideration of stakeholders, and even the ability to step back and allow future leaders to take the helm at times.

Each member of the program creates their own Capstone Project as an innovation model in which they apply the concepts they have studied and observed to address a particular issue. With his Capstone Project, Noriman is planning to leverage the strengths of housewives from the lower socio-economic background in Singapore to meet their financial needs with a unique online personalized cookie business.

What interested you about studying under the Global Leaders for Innovation and Knowledge program?

There were several aspects that attracted me to this program. One is the multi-faceted topics which were covered, from business administration to issues such as liberal arts. I thought that this was a very nice combination of different topics.

The other aspect which attracted me to the program was the fact that it is a multi-campus program with opportunities to learn in different countries. The program is not only about theories but also about application, and there were many field studies, or what we called doing “gemba,” a Japanese term which refers to seeing the real work and the actual situation. Learning the concept in class and then being able to see it in real life was very attractive to me.

Which subject had the biggest impact on you?

Many subjects made a great impact on me. I liked Knowledge Management especially because it gave us a framework as to how we can improve ourselves and think about social innovation and the value that we bring to the community. That was very enriching and insightful. We talked about how the focus should not only be about the real, tangible product that you see but also to think about the value behind it. I sat down and did a lot of reflection after that session.

I applied much of this knowledge to my Capstone Project. Initially, I thought it was going to be about a cookie business where the cookie is just a product, something which people buy and eat. However, it is not just about the cookie but rather the whole entire process of purchasing the cookie. It is the packaging and the appearance of how people purchase the cookie. I think that all matters as well. In this context of the cookie business, it is about the experience of purchasing the item online. It is not about clicking "I want chocolate chips" but about making it fun, making it interesting, and making it engaging; in other words, making the whole process of shopping fun. I think that is the essence of my Capstone Project. 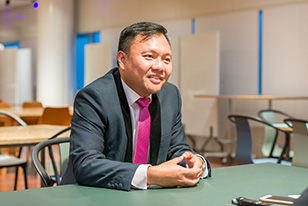 I think it has. This whole program has created a deeper awareness in me in terms of what it really means to be a global leader. Before this program, I thought of leadership in a very simplistic way. I did not think about leadership with a very broad perspective. I just thought that being a leader involved standing in front of others, having several ideas and getting people to work along a particular idea. Yet that is not sufficient in leadership.

The Global Leaders for Innovation and Knowledge program has given me the insight that being a leader, especially at a global level, requires more skills and more knowledge. You need more than having ideas and getting people to work for you. It is about how to bring people along. It is also about understanding others, understanding the context and being aware of the implications of the decisions you have made as a leader. What does that decision mean to the different stakeholders? In the past, I would probably think that ok, this decision affects me and a few other people. I did not really think about the second or third tier of stakeholders affected indirectly by that decision. I think this program has created the awareness that when you make decisions as a leader, there is a larger impact and larger implication, and that is a very important awareness.

Why do leaders need empathy and what is an example you have seen of how their actions affect multiple stakeholders?

Allow me to take a point from my Capstone Project. I am working on an initiative by which housewives can augment their households’ income by making and selling cookies. My initial thought about implementing that program only concerned the housewives. Of course, that really matters and that is important, but then that decision of getting the housewives to go out and help supplement the household income is not only about the housewives. It would also affect their family members.

Was there anything else you learned about leadership? 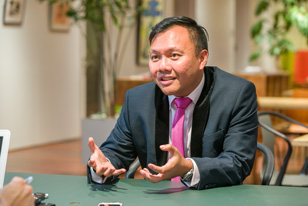 Being a good leader also entails knowing when to take the lead and when to take a step back and give others the opportunity to develop and grow. That is very important. During our Thailand module when we visited the Doi Tung Project, I asked the CEO of the project for advice: “What makes a good leader?” That was exactly his comment. He said that in order to be a good leader or nurture good leaders, you need to be able to take the risk and give future leaders the opportunity to lead. Although you are the leader at that point in time, you must be able to learn how to take a step back. Be a supporter rather than always in the forefront.

I found this advice very, very valuable. I suspect that it would be very difficult for a lot of leaders to give others the opportunity to lead at times. Perhaps this is because they lack confidence in the other people or they are worried about other issues, but in this context the advice given by the CEO of Doi Tung was that you need to give them the opportunity, you need to give them that experience if you want them to take a leadership position in the future. I guess that is an attribute of leadership which is very difficult for most people.

What would you say is the most important thing that you learned in the Global Leaders for Innovation and Knowledge program?

The other aspect which is really valuable about this program is the experience of interacting with the other participants. That is another important dimension of the program - networking and being able to meet with good leaders from all over the world. In my class, there were people from 11 countries and I think that being able to exchange ideas is a very valuable experience. Sometimes we may argue or disagree, perhaps because of cultural diversity or the different backgrounds that we come from and the different reference points that we have. We disagree on certain issues but that is helpful because we then gain a broader perspective on issues.

For example, we talked a lot about collectivism and individualism, and why certain societies tend to behave in a more collective manner. There was an observation when we were in Singapore that there were many CCTVs everywhere in Singapore. Someone remarked that Singaporeans are living in a country where the government monitors every single step and every single movement of the citizens with the CCTVs and so-on and so-forth.

My initial reaction was to disagree with that, because as a Singaporean myself I do not feel threatened. I do not feel that the government is really monitoring us. But then again, I need to understand where the person who made that comment comes from and what her perspective is. She came from a country where they champion freedom of rights and individual rights. If that is the kind of society she grew up in, then perhaps I should not take offense for that remark. I will not be offended once I understand where she is coming from and her background. However, if I do not know where she comes from and I just take that comment on its own, then I probably would be a little offended. I might think, why are you criticizing my country and my government where I live? Yet because of the fact that I am mindful that I need to understand where she comes from, including her background and the context in which she made that comment, this then gives rise to a more productive discussion.

One of the discussions that followed from that comment concerned how we always tend to look at CCTV in a negative way. But I also shared that we could reframe our way of thinking and look at CCTV in a more positive light. One example I gave is instead of CCTV capturing the bad things that people do, CCTV could also capture good things that people do and reward them for doing something good, because often people’s good deeds go unnoticed. Would it not be nice if you used the CCTV to capture all of these good actions and then reward those people who do good things? This would then encourage more positive behavior. As you can see, this kind of conversation or disagreement will lead to better ideas, a better way of looking at things, and a better perspective.

After returning to Singapore, what sort of steps do you think you will be taking in the next five years or 10 years?