The Importance of Communicating and Executing Vision 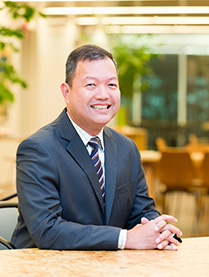 Fujitsu Scholar on the 2016 Fall Course:
Marianito Kintana Palana
Chairman of the Board of Directors
Tindog Tolosa Consumers Cooperative

Marianito Palana completed the Global Leaders for Innovation and Knowledge 2016 Fall Course. Based in Manila, the Philippines, Palana worked in the IT industry for most of his career. When Typhoon Haiyan struck the Philippines, in 2013, it devastated his father’s home town of Tolosa, a small fishing and farming village on the island of Leyte. This inspired him to establish the Tindog Tolosa Consumers Cooperative, a social enterprise project funded by more than 200 members that is intended to provide jobs and increase incomes for the people of Tolosa.

What were the most important concepts you learned in Japan?

In Japan we studied management concepts starting with strategic management, which was kind of a high-level review of what a business is. What was emphasized was that a corporation always has to have vision, which we especially noticed as we focused on Japanese companies, founders, and CEOs. Each had their own vision, which drove the company, and vision is something that comes from the founder.

I also learned that Japanese companies have a kind of focus not just on profit but on stakeholders as well. This includes taking care of the employees, the customers, the environment, and generally emphasizing the common good, which really resonated with me because that is exactly what my Capstone Project, the social enterprise, is about.

We also had this course called concept creation, which really made an impression on me with the out-of-the-box thinking it required. You have to be able to come up with a new concept but also be able to distill it into its essence, which might be a phrase or word that captures everything. As part of the course exercises we had to go to certain places or visit certain companies and kind of distill everything we learned into one phrase or concept. I found it a very useful activity. It basically involved observing a certain place and identifying the values that the people there want to aspire to or what they find important. Then we had to come up with a product that we could distill into one phrase.

So that’s really what I learned from the Japan module: vision and concept creation, and how to communicate both.

What were the most important aspects of your coursework in Hawaii?

The Hawaii module was more focused on liberal arts but, on the practical side, I learned a great deal about finance and negotiations. First, I understood in that course how to interpret cash flow statements, which is something I can apply to my own business in Tolosa. I also came to understand how American businesses run. They really are not afraid to make use of debt so, for them, debt is not a bad thing. I saw how American businesses use debt strategically and I could understand how to use debt to grow a business.

With regard to the conceptual side, I learned much about multiculturalism. I think Hawaii really showed us how different people live together in harmony. Many of the people living in Hawaii today are descendants of immigrants who were thrust into that place because of forced integration, such as workers from China, Japan, and the Philippines who had to work on Hawaiian plantations. I learned from Hawaii’s mix of ethnicities how important it is to respect each other’s cultures.

What did your practical coursework in Singapore and Thailand teach you? 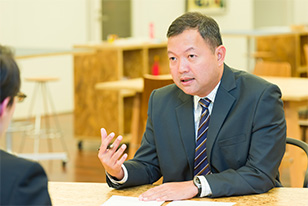 Actually, the things I learned in both Singapore and Thailand were very similar: the importance of vision and execution. In Singapore, we had several lectures by various Singapore government agencies, so we could understand how they really developed a vision of Singapore as a new country, taking into account its limited resources, including limited population and limited land.

Singapore started with those kinds of limitations, but I think Lee Kuan Yew is an example of a very good leader with a vision. We can see the success of that vision when we look at Singapore today. Even when we listened to the lectures of people, they were all actually saying the same thing: they still share the same vision. And what follows from that is the execution because they managed to build up this whole bureaucracy to execute the vision.

I saw the same thing in Thailand but in a different way. The vision and execution in Singapore really seemed to be coming from the government in a top-down fashion. In contrast, Thailand was more subtle, perhaps because the vision there came from the royal family, particularly the Princess Mother and the King. They all had the same vision which is what they call the “sufficiency economy.”

We visited a small town called Doi Tung, which was an area that was full of former opium addicts. But the Princess Mother had the vision to transform the place and transform the people. We kept hearing the same things about vision related to the goals of the project, whether it was from the elders of Doi Tung, the government administrators, or the young people of that place. They essentially all said the same things about the project.

Perhaps the most important thing I learned from Singapore and Thailand is the importance of having not only vision, but also its communication and execution. One has to really be able to communicate vision not just in a grand way but also in a very simple way, and you have to do it every day, consistently and constantly to all of the stakeholders.

Could you please tell us a little about your Capstone Project in the Philippines?

Well, my Capstone Project is based on the social enterprise project I organized with the aim of increasing income and providing jobs for the people of Tolosa, a poor fishing and farming village on Leyte, the Philippines. I’ll tell you how this came about.

I was working at a corporate job in Manila when Typhoon Haiyan struck the Philippines in November 2013. Although I was born and raised in Manila, my father is from the town of Tolosa on the island of Leyte, which is where the eye of Typhoon Haiyan hit when it arrived. More than 20,000 people died on Leyte. The typhoon destroyed all the houses in Tolosa yet, fortunately, for some reason, nobody died there.

So I thought of doing something to help the people there. Initially my friends and family and I tried to assist them by helping to rebuild houses and donating small boats to the fishermen. But then I thought we should do something more long-term, so I came up with the idea for the social enterprise.

In 2015 we established a grocery store called the Tindog Tolosa Consumers Cooperative, and so my Capstone Project is concerned with how to expand that grocery business in order to have a greater impact on the community. Right now the grocery store is organized as a cooperative of 200 members that employs five people. Basically the members own the business. I serve as chairman of the Board of Directors and help contribute to the cooperative with some business skills, some management skills, and some technical skills.

How will you apply what you learned in Singapore and Thailand to your Capstone Project?

Doi Tung really resonated with me because it has a sufficiency economy. We visited several factories including those for ceramics and weaving. People said they could automate all of these factories but if that happened they would eliminate many jobs. The idea there is really more about providing jobs than it is about providing products.

As an organization there always has to be some kind of balance between growth and providing for the good of the people, for all the stakeholders. This goes back to the Asian or Japanese business philosophy: it’s not all about growth; it’s also about the stakeholders, meaning the employees, the community, the customers, and the environment, etc. You have to keep that in mind. 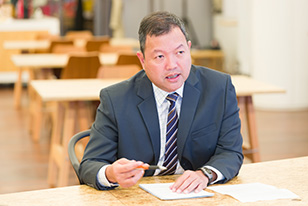 Actually, in terms of the sufficiency economy, I also intend to encourage economic activity in Tolosa. If we are able to grow our business in that area people might decide to stay and live there. Tolosa is a small town about 30 minutes away from the main city on the island. Before we set up the grocery store, people would therefore usually go into that main city. All the townspeople’s money would just go to the big supermarkets which are owned by the big corporations, and eventually that money goes back to Manila or somewhere like that. So by setting up the business in Tolosa, the money doesn’t have to leave the town. It generates jobs and supports other businesses, so in terms of the sufficiency economy, we’re making ourselves kind of self-reliant by encouraging economic activity.

Thailand’s Doi Tung is a town almost as big as Tolosa, or almost as small as Tolosa! I feel I gained a lot of practical applications from Doi Tung and I believe Doi Tung could be replicated, given a different context, in the Philippines.

What is your vision for the cooperative you’ve started in the Philippines?

It’s really to increase the incomes of people in the town of Tolosa and make the town prosperous. I now have the resources and capability to help people and it makes me happy to help them and to make them prosperous.

But another part of my vision has to do with what I call solidarity, through which the rich can help the poor. We have a lot of inequality in the Philippines but there is a kind of indifference towards poor people. Inequality is very hard to solve but there should be a deliberate mechanism to help impoverished people.

What I am providing is a channel to help them. Since my model is a cooperative, the people themselves raise the money, which could be a little amount, but there are people who can contribute a lot more money to the business. I call these people the solidarity investors. These investors have the resources to help, which makes them feel better about helping the poor. The people they are helping, in turn, feel solidarity with these wealthy investors. That kind of solidarity is the value that I want to foster.

How would you describe the Global Leaders for Innovation and Knowledge Program? 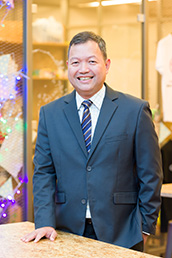 There is a Japanese phrase we learned called “gemba-watching,” which means to go out and observe the reality outside. The whole program brought us to different places and so it is not just about what we learned in the classroom itself; but also what we learned outside; it could be the food, the people we met, the homestay family who I lived with in Hawaii, and even living with 20 people of different nationalities and cultures for three months. All of these opportunities gave us direct experience. So that is how I would describe the Global Leaders for Innovation and Knowledge Program: a lot of high-quality, direct-learning experience.