Providing Value for the Common Good 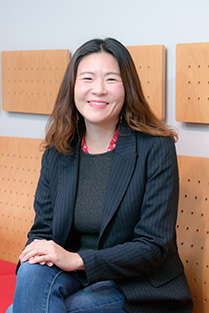 Hong Yun (Marie) Lee received a Fujitsu Scholarship and completed the Global Leaders for Innovation and Knowledge 2017 Fall Course in December 2017. Marie is currently working as a director of online business development for a video-game company in South Korea. Originally, Marie was seeking a short-term academic course on knowledge management but found herself inspired to help others after a visit to an elementary school in Thailand during the program. Aware that there are many elderly people in Seoul living alone in poverty and struggling with depression, Marie has developed her Capstone Project under the concept of creating a place in South Korean society for such elderly people, giving them employment, social contact, and a sense of belonging in the community.

First of all, could you tell us a little about your background?

I think my life has had many changes and has taken many different paths. Growing up, I was always taught to be a pianist, and I played piano from the age of five until I was in high school. Yet when I was in high school, I realized that this was not the path for me and chose to study civil engineering. Consequently, my major is in civil engineering, but while I was in university, I thought I wanted to be a writer. I joined a college magazine club and was making magazines for the university students. I applied for some jobs at magazine companies, but ultimately that did not work out.

Then after I graduated, I went to work at a Japanese pharmaceutical company. I was there for only two years because my job involved dealing with only doctors, particularly overseas doctors, and it wasn’t so enjoyable. I think I wanted my work to be more about interacting with customers, like a B2C (business-to-consumer) company. So I moved to a gaming company, and ever since then I’ve been working for the gaming industry. I experienced many changes in my life during those early years, with a great deal of trial and failure.

Why did you decide to apply for the Global Leaders for Innovation and Knowledge program?

I had been working in the gaming industry for 14 years, and I felt that I needed a change. I had already gained practical business sense and knowledge, but I thought I needed something else to supplement my experience. I already knew about this program as I had been looking for some academic courses that were short term. It was hard to find short-term programs that give you knowledge on management, such as a short MBA course.

I thought this program was interesting because it was multi-campus and covered many aspects. However, I didn’t really have time to apply then, which was around five years ago, as I had gone to a new company and soon became busy. I totally forgot about applying.

Five years passed, and I started looking at this program again because it just so happened that some time opened up in 2017. In the gaming industry there are franchise titles coming in every year, but in this particular year, especially in the latter half of 2017, there was nothing significant in terms of big titles. The CEO of my company told me that if I had a chance, I could take some time off to go out and train myself. He said that it was a good time because we were going to be very busy the next year. So the timing was perfect.

What was it that made you feel you needed to do something different? 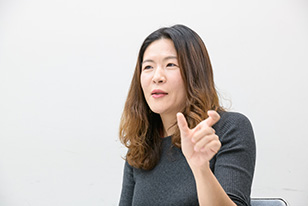 The gaming industry is a heavily commercialized industry, and I felt I needed to do something meaningful. Perhaps because I’m turning 40 next year, I was looking at my life, and I thought this is the time to make something meaningful happen or approach meaningful things. This program is not just about management or knowledge, but it’s also about serving the common good and being a good leader in society. Those are actually aspects that appealed to me.

In the gaming world there are many gamers who become absorbed in video games. One of my friends called me one day and said his brother-in-law was spending a significant amount of money on our game. My company’s game is enormously popular in Korea. This man had spent around US$20,000. He was not making any money on it either - he was just like a Japanese otaku [Otaku is a Japanese term that means “fanatic” or “nerd.”]

My friend told me, “Save him. It’s your game. Your game is ruining somebody’s life!” Up until that point I was just looking at all these numbers and checking to see if we were doing well. I never thought about our users as human beings - they were just numbers or represented an amount of money earned. But our games are actually involved in someone else’s life.

I was trying to do something for him, but there was nothing I could really do in the organization, because there are so many people addicted to games, like that person. We employees know our company is doing some good things as part of our corporate social responsibility, but it is not touching other aspects, like all these addicted gamers. This made me wonder if maybe there is something that I have to do because I’m a senior person in the industry, and I feel more responsible in that organization. That’s when I thought there’s something I should be doing in a meaningful way.

Did you have any difficulty choosing to apply for the program, or was it clear that this was what you wanted to do?

I think it was pretty clear for me. Perhaps I didn’t really think about how the courses might be difficult for me. I was just so excited about meeting new people and traveling around - to Hawaii, Thailand, Singapore, and Japan, so maybe I was a little naive. Actually, it was really hard for me to understand these courses because my major was in engineering, and I had never had these kinds of management courses in English. Everything was challenging, but I didn’t expect that back when I applied.

How do you feel now after completing the program?

Well, on the one hand, I struggled with my assignments, and there was not much time to enjoy life. You’re busy, and there is group work. We had a lot of pressure because of this group work since you have to do your part in the group. Yet on the other hand, many of my classmates were very young, and I had not had this kind of chance in my organization to talk to people in their 20s. We became friends, so I was able to hear about their thoughts and their lives. Meeting different people with different backgrounds has been interesting and exciting.

What would you say is the most important thing that you’ve learned in the program?

Overall, the most important thing I learned was to admit that people are different, embrace their differences, and try to think from their perspective. We had participants from nine different countries, and all of them had different backgrounds. Embracing them as they are and not judging them by their country are very important.

What are some of the positive influences that you’ve gained from your classmates, and how have you changed as a result of your interaction with them? 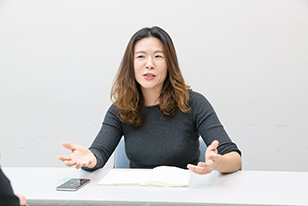 My classmates would ask questions during class that sometimes really surprised me. I would think, that is such an important question - I’m inspired. Sometimes the comments that he or she made were amazing, and I wondered how he or she could be so creative and so different.

All these people were so creative and trying to be proactive. They were all very friendly and gave me different perspectives and ideas. I felt more alive on the program because the conversations we had were so lively, and everyone had different opinions. They participated in the program because they wanted something and because they were smart and also creative. They were trying to find something. Everyone was trying hard to be helpful to and supportive of each other. So when I worked on my Capstone Project, everyone was trying to give me more ideas. It’s a competition, but it’s a competition to make ourselves better. I really felt like everyone was helping me to be a better person.

How did they help you with your Capstone Project?

They gave me some ideas and case studies. Many people gave me their stories of policies for the elderly or the state of the elderly in their country. I got the most help from my Japanese participants, but Indonesian and Filipino participants also gave me good examples. I owned the keyword “elderly” in our class, so every time that keyword came up, everyone tried to give me information, and they were very helpful.

What is your vision for your life’s direction in the future?

During the Thailand Module, the Doi Tung visit really inspired me as to how social change can be made by ordinary people who want their family to be happy and other people to be happy. When we asked the question, Are you happy? they all said, “I am so happy because I can see that other people are getting a better life than before.” This impressed me.

In the Japan Module, we had a course titled “Shaping Tomorrow With You.” It is a course to think about how to enhance my own happiness as well as that of other people on this planet. In this class yesterday, the last of our group work, we were asked what our vision is. Everyone talked about their vision, and my vision is to be a social entrepreneur in three years because I want to solve social issues. The biggest social issue for me is still the problem of elderly people in Korea. No other issue in Korea ever touched my heart, so I actually want to solve this problem. I always thought I would change my life at 40, and next year I think I’m going to be participating in my Capstone Project or working as a social entrepreneur. That’s my vision.

While we were in Thailand, we went to this elementary school, and there I met a couple from Europe. They were originally from an international school in the UK, but they had moved over to Thailand. They had been working really hard for 14 years to make this Doi Tung elementary school better. 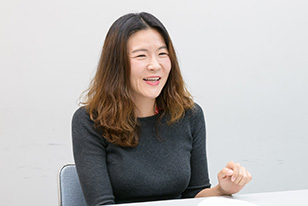 I asked one of them a simple question, “What motivated you?” I said, “Doi Tung is beautiful, but it’s inconvenient, right? You could be better off in the UK, but you came here and are doing so many things.” In his reply he told me, “I’m 53 this year, and when you’re in your 50s, life becomes empty.” He was looking for meaningful things to do. He said that when you look back on your life, you don’t want to be filled with regret. That’s what he had decided. He had this calling from inside when he was around my age. Now when he looks back on his life in Thailand and the things he has changed for Thai kids and the children at the school, he’s so happy.

That was the turning point for me. That was the moment I thought that I also don’t want to have regrets in life. I need something to make my life better and other people’s lives better. Everything in history starts with some pivotal moment, right? I think I can say that the next change in my life started with that moment - in that elementary school in Thailand.