Creating Receptivity for a Diversity of Thought 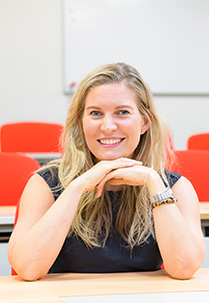 Lauren originally decided to participate in the program as a chance for personal growth and to seek new opportunities for the future. After having successfully completed the program, Lauren chose to take on a new challenge in a mid-size technology company located in Melbourne, Australia, in which she hopes to put the knowledge she has gathered into practice.

What was your reason for wanting to study at Global Leaders for Innovation and Knowledge program?

I found the Leadership Program amongst a list of scholarships on a mailing list that I subscribe to and was initially attracted to the two practical application modules in Singapore and Thailand as well as the focus on liberal arts subjects such as philosophy and negotiation skills.

How would you describe the program as a whole? What were the most important things you learned from it?

The program was an experiential learning course; it was not just about sitting in a lecture theater absorbing content, there was a real focus on discussion and learning through reflection. Knowledge Management and Innovation course taught by Dr. Ikujiro Nonaka and Dr. Ryoko Toyama really stood out. In Thailand, we saw how the theory has been applied in practice and how it has impacted the lives of those within the village. We even learned how the model has been applied in other countries, such as Afghanistan, so it was very interesting to learn and see that the model was so highly adaptable and effective in multiple countries and circumstances.

As for the most important things I learned, there are three great questions that will stick with me that we encountered during the program: What's the value I bring? In this change, who benefits and who loses? And through what power mechanism? In any conversation, thinking through these three key questions can help you gain a greater understanding of what is at play.

Did your concept of leadership change after the program? 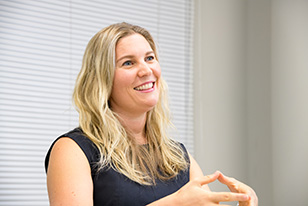 At one point one of the professors drew a picture of a school of fish on the board and asked us which of the fish is the 'leader'. In Western cultures we tend to think of the leader being at the front, but in the East the leader swims at the back to support others in the group. It encouraged me think about what leadership means in a global setting and what unconscious biases I hold as a result of my experiences in leadership positions over the years and what I've seen in other leaders.

We were also introduced to the concept "ba," which means the environment or the context in which relationships develop and a term called "waigaiya," which refers to the application of knowledge into action, through communication with the people around you. I must admit that I was a bit skeptical at first, but after doing "waigaiya" in class I realized how much better my ideas developed through conversation and feedback.

How do you think your interaction with your classmates has benefited you, and your goals for your project? Has it changed your views on leadership?

I think my fellow classmates were some of my best teachers. We were from ten different countries and spent basically all our time together over the past three and a half months, so we have become quite a strong-bonded group. At the end of the program, when we reflected on some of our most significant moments, many of them were from outside the classroom. The thing that struck me the most was how divergent our views were at times but also how similar they were at others. It was great to hear about Japanese workplace culture and how different work practices are across countries.

Before the official program started the Japanese students had two weeks of English classes and finished off the two weeks feeling confident and ready to start. On the afternoon of day one we had a workshop and presentation style session and a little bit later told us that after that session they were completely deflated and didn't feel there was space in the conversation for them to contribute. I hadn't realized until they told us how much their confidence dropped from this experience. One of the biggest challenges for me was getting the right balance between valuing the diversity of the group, and allowing enough time for those diverse opinions to come through and facing deadlines and needing to get to an outcome within a specific time period. I feel strongly that if you don't allow various viewpoints to come through, you miss out on so much.

Were there ideas on leadership that where different for each module in the program?

I could see how each module built on the previous one. I could recognize the structure of the order in which the subjects were run. But I could also see that different professors had different perspectives on leadership that they stressed. I think that was great about the course, as it forced you not to just accept what they said, but to think for yourself and question what the professors were saying, trying to see the contradictions between various professors and then having to develop your own point of view.

I heard that you changed the course of your Capstone Project during the program? 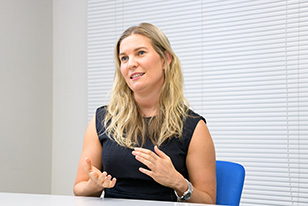 I started off with a Capstone Project that was more about flexible work, and how to structure work in a way where roles are designed differently from how they are in the present, to allow for more flexibility. For example: to allow people to do multiple jobs at the same time. However, after I took the philosophy subject, which focused on the attention economy, it was something I wanted to learn more about.

I remember speaking with Dr. Toyama about whether I should change my Capstone Project topic or not. She told me that I sounded more passionate about my new subject, and that I should just go for it. She said that it's important to follow where your passion lies, and that really encouraged me to make the switch.

How will you apply what you learned in the program to your project?

I'm looking forward to applying the knowledge management model that we learned from in the Japan module. Furthermore, I'm also interested in integrating the idea of "the attention economy" into my own project. The attention economy is about where people spend their finite 24 hours of attention in each day and the impact that technology has had, especially through social media, on the number of hours spent on creative pursuits, building and maintaining relationships, spending time with family, and so on. Furthermore, many of these platforms are designed, using behavioural psychology, to be as addictive as possible, with many young adults falling victim to these tactics.

I'm very excited to start putting this project into practice when I return to Australia. I'll be working in a smaller company, where I hope that I can reach more people and have an impact. I hope that the application of different thinking that I experiences during this program will be successful in bringing diversity of thought to the organization too.

The idea of diversity of thought seems to be central to you. When did you feel you really contributed to that idea during the program?

We are a product of our background and our experiences. One of the interesting leadership articles I read was about re-writing the stories you tell about yourself based on your reflection of an experience. For example, if you've had a few poor experiences in public speaking growing up, you may tell yourself you're no good at public speaking. As you get older this becomes self-perpetuating and until you do the work to re-write new stories and find proof points where you have been good at public speaking this will only continue. So, if you think about how you can apply diversity in the workspace and look for stories and examples of where you've done it in the past, it helps you bring a greater level of awareness to your current interactions.

I also think that it is important that you are conscious of the environment you're in and think about the diversity you bring to that environment. It's helpful to ask, who am I diverse for and what is the value in the diversity that I bring? I think that my contribution to diversity was probably grounded in a combination of these two ideas.

What would your advice be for someone looking to apply to this program? 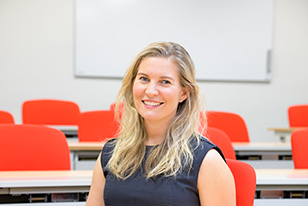 You will be learning a lot more than what the program outlines and will probably not realize it until you reflect afterwards. The value of the daily reflections lies in the conversations that you have with your classmates and what you will learn about yourself along the away. Come with an open mind and be open to learn not only from the lectures, but also the country you're in, the people that are on the course, and the people you will be talking to.