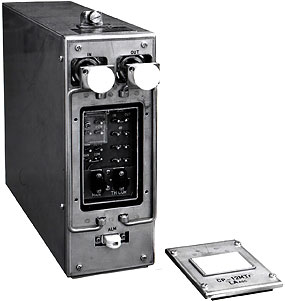 High-density, high-performance and reliability using transistors
The development success of the C-12M in 1962 demonstrated that Japan's technology was now on par with that of other countries. It was around this time that NTT announced its plan to create a nationwide direct distance dialing telecommunications network. At the time, not all phones could connect automatically, and some calls still had to be placed through an operator. NTT's plan called for the entire system to be automated.
Under the plan, transmission equipment would need to become smaller, more efficient, and more reliable. The vacuum tubes that were being used at the time, however, were reaching their technological limit. And so, Fujitsu, pinning its future on a new device called the transistor, introduced a new line of transmission equipment starting with the CP-4M in 1963. The CP-12M, which was delivered in 1967, is a representative model.
By developing its own transmission equipment, Fujitsu was engaging in a fierce competition with other companies. Fujitsu would become a world leader in equalizer and filter technology, and establish itself as a brand known for"reliability and creativity". Fujitsu's success came to fruition in 1972 with the C-60M, the world's fastest transmission equipment boasting 10,800 channels.