For the cloud computing era 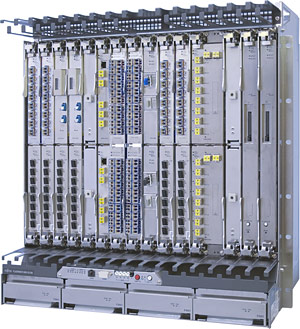 In the late 2000s, LAN packets and videos accounted for an increasing proportion of network traffic. At the same time, internet protocol (IP) telephony was becoming more widespread. IP is a"best effort" network service in which the network does not provide any guarantees that data is delivered. With the changing times, however, IP services also needed to become secure and reliable. Additionally, monitoring and control methods were becoming complicated because various types of data were now traveling back and forth across a single network. Simplification was needed in this regard as well.
FLASHWAVE9500, which Fujitsu launched in 2008, is a transmission system that meets the unique demands of the cloud computing era. Built on top of wavelength multiplexing transmission technology, the FLASHWAVE9500 is both a packet processor and a digital multiplex processor, combining two functions that had previously been carried out by separate machines and making it a pioneering tool in the telecommunications industry.