Expand the Use of Renewable Energy

Widespread use of renewable energy in society has reached a new level of importance from the perspectives of addressing global warming, securing stable energy supplies through diversifying our energy sources, and growing our economy with energy as a pillar of support.

The Fujitsu Group has established its environmental vision aimed at achieving a decarbonized society. Under this vision, we proactively promote renewable energy use as well as thorough energy saving. To achieve this vision, we have set new quantitative targets in the Environmental Action Plan, and are actively promoting the installation of solar power generation equipment at our business sites, as well as expansion of purchasing and use of green power (electric power generated with 100% renewable energy) at overseas business sites at which costs are particularly reasonable. 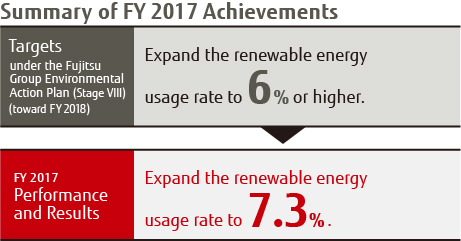 Although numerical targets for the use of renewable energy were not originally set in the Environmental Action Plan (Stage VIII), we set a new target in FY 2016: increasing the usage rate by 6% or higher in an effort to increase purchasing and use of renewable energy, mainly in overseas regions in which it is possible to procure with economic rationality. In an effort to expand purchasing and use more, we are utilizing the Guidelines for Adopting Renewable Energy and the External Renewable Energy Information Database, both newly created in FY 2017, and reviewing implementation at our domestic and overseas business sites. In FY 2017, approximately 170 GWh of renewable energy was used, constituting 7.3% of the total amount of power usage. 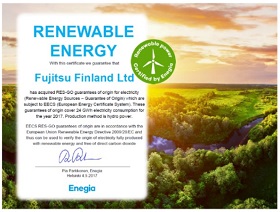 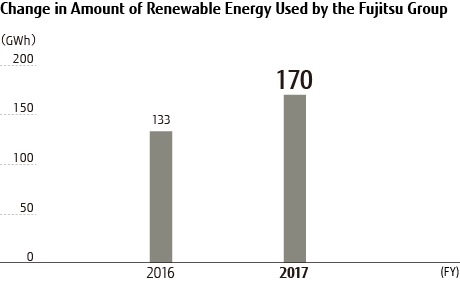 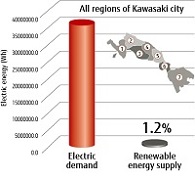 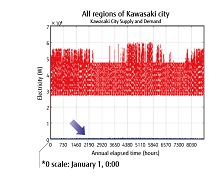