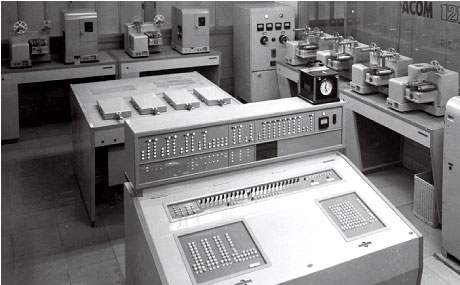 The FACOM128A was designed and produced while utilizing the experience gained from the FACOM100. It was a relay-type scientific computer completed in 1956 and Fujitsu's first productized computer. The first unit put into use was delivered to the Ministry of Science, Education and Culture's Institute for Statistical Mathematics, and at nearly the same time the second unit was delivered to Yurin Denki Seiki's Calculation Center. An innovative address-system program code was developed for the FACOM128A, giving it an operation speed roughly 4 times faster than the FACOM100. The FACOM128B was a relay-type scientific computer completed in 1958 as an improved version of the FACOM128A. It was used in the design of products such as camera lenses as well as the YS-11, Japan's first domestically-produced passenger aircraft, and was highly evaluated as an outstanding machine. It is currently on display in working condition at Fujitsu's Numazu Complex as one of the world's oldest still-operational computers.