“Briging happiness to the people of Kamoenai Village,Hokkaido through DX.”
Fujitsu Japan’s challenge to work on sustainable town development 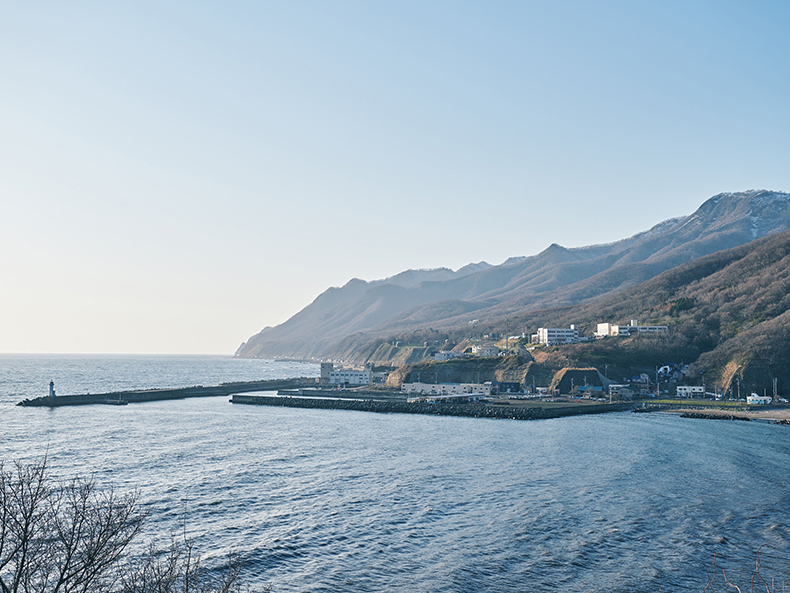 On June 1, Fujitsu Japan dispatched a digital transformation (DX) specialist to the Kamoenai village in Hokkaido with the aim of realizing a prosperous and sustainable society. In addition to addressing the shortage of DX personnel in local government, this project aims to create an environment-first, resilient society where people can live affluently and peace of mind. For this project, the Fujitsu employee even became a resident of Kamoenai village.
In this article, we will introduce the Fujitsu employee who is working energetically on initiatives in Kamoenai village.

About Kamoenai village and its History with the Fujitsu Group

Kamoenai village is located in the central western part of Hokkaido’s Shakotan peninsula. The village faces the Sea of Japan and can be reached from Sapporo in two hours and 30 minutes by car. Kamoenai village is the second-least populated municipality in Hokkaido with a population of around 800 people (as of April 2021). The village’s main industry is fishing. However, the fisheries industry has been facing challenges due to a shortage of workers, an aging population, and other factors. Since 2019, Fujitsu has been working with Kamoenai village to resolve these issues.
In a demonstration experiment for the land-based aquaculture of sea urchins and sea cucumbers using IoT technology, productivity has improved by 30%. In addition, on the environmental aspect, Fujitsu also contributed to the reduction of two tons of food loss by using discarded vegetables as food for sea urchins. Fujitsu has received various awards, including the Ministry of Agriculture, Forestry and Fisheries award at the 3rd Japan Open Innovation prize held by the Cabinet Office as well as the encouragement award at the ICT regional revitalization awards organized by the Ministry of Internal Affairs and Communications.

While local governments were under pressure to adapt to the new normal, the Fujitsu Japan employee aims to accelerate DX as a town resident

While Fujitsu were considering the next actions in Kamoenai village based on the results of the IoT in aquaculture experiment, the arrival of COVID-19 dramatically changed our way of working and living. As regional communities were forced to adapt to the new normal, Kamoenai village could no longer receive support from Fujitsu like in the past so communications started to dwindle
However, Kamoenai village was eager to promote DX as a municipality, not only receiving DX know-how from outside of Kamoenai village but also from inside. In response, Fujitsu Japan decided to dispatch a specialist to Kamoenai village for two years as an engine for promoting DX using the Ministry of Internal Affairs and Communications' Regional activation entrepreneur program.

In order to select the specialist that would be dispatched, Fujitsu Japan conducted a company-wide recruitment process. This process included a comprehensive evaluation looking for person to contribute to urban development over the next 10 years, including the ability to adapt to the local community. From this process, an employee named Tatsuki Fukuchi was selected. 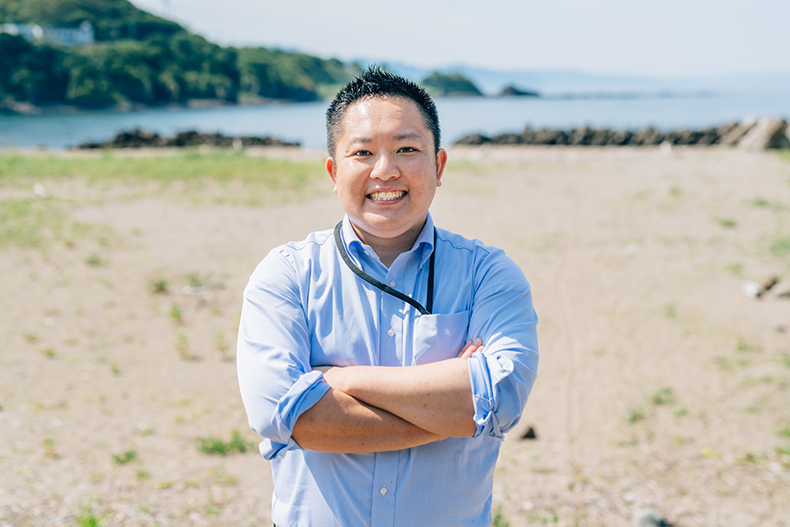 While studying at university, Fukuchi became interested in the local community and gained experience in farming. Through his interactions with farmers, he realized the issues in the field of agriculture. Because of this experience, Fukuchi decided to study agriculture in the U.S. in order to learn about the latest advanced agricultural technology. After joining Fujitsu, Fukuchi was involved in the field of agriculture as a system engineer. Having his goal as “Expanding his experience not only in agriculture, but also in fisheries and community development”, he was appointed as a digitalization strategy officer in the planning and promotion division of the village of Kamoenai on June 1,.

――It’s been about five months since you arrived. Please tell us about what you have achieved so far. 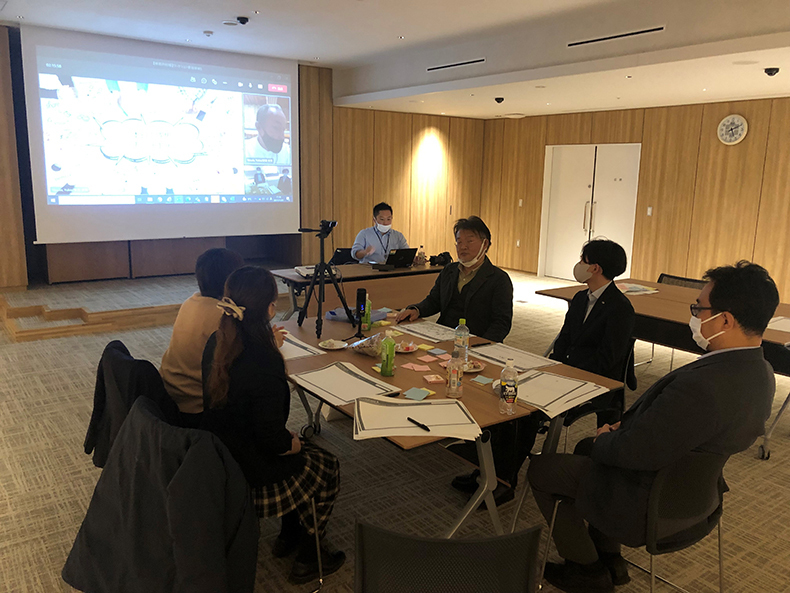 ――After moving to Kamoenai village, how did you build relationships with the local residents as a new face in town?

Fukuchi: I need to be part of the village before I can be in charge of the digitalization strategy. Outside of my work, I participate in a range of community activities and events in the village. I play softball on weekday evenings and park golf on weekends.
As a hobby, I take pictures of the new product form “The women's club in the fishers’ cooperative”, and the working view of fisherman. The other day, I was taken out on a boat for the first time.

――So, you’re not just trying to solve local problems, you’re also trying to improve the atmosphere of Kamoenai village?

Fukuchi: Yes. We broadcast nationwide TV commercials about our activities in the village. In addition, we had Kamoenai's mayor Masayuki Takahashi take the stage at Fujitsu's flagship global event “Fujitsu ActivateNow 2021” to talk with the president of Fujitsu Japan Takayuki Sunada.
The mayor and many people living in the area appeared in the TV commercial. You can feel the atmosphere of the village and see Hokkaido’s beautiful scenery captured by drone. Please check it out! 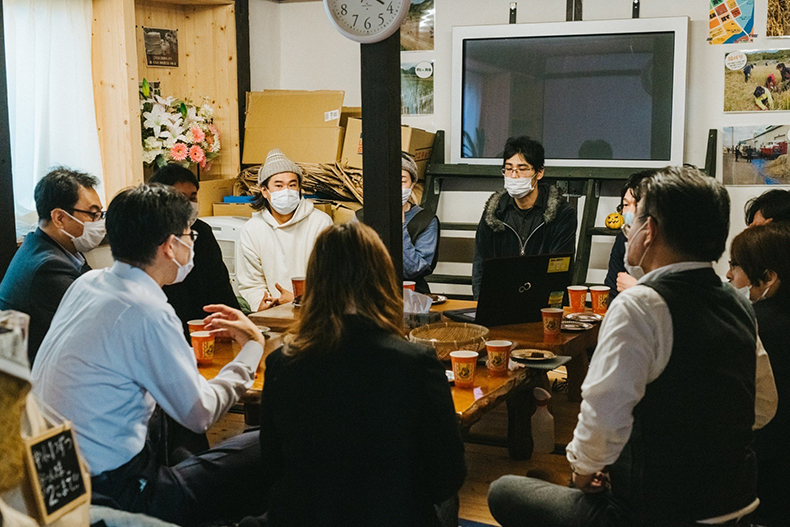 ――Please tell us what you would like to achieve in the future.

Fukuchi: After conducting a digital status survey by visiting all of the households in Kamoenai village, I thought education was the most important issue. Therefore we would create a basic concept and vision map of “DX x Career Education” by the end of this fiscal year and use it as the basis for demonstration next year.
There is no high school in Kamoenai village. There is only one high school outside of the village that can be accessed by Kamoenai’s young people. As Fujitsu Japan employee, I would like to work with the young people in Kamoenai village to increase their options for the future, and to encourage them to talk about the future of Kamoenai village.
In addition, I would like to continue to identify important issues through interviews with local people and do my best as a resident of Kamoenai village to contribute to the creation of a prosperous, safe, and sustainable village.

If future I would like to utilize Fujitsu Japan’s strength (local government, healthcare, and education) to help create a prosperous and sustainable society through cross-industry collaboration and the application of technology.