Tokyo and Jakarta, Maret 23, 2015
Fujitsu Limited and PT. Fujitsu Indonesia today announced that they have built a participatory disaster information-sharing system for Jakarta’s Regional Disaster Management Agency, BPBD DKI Jakarta (*1), that lets residents share disaster information by using a smartphone app. BPBD DKI Jakarta has this month commences operation and provision of the smartphone app to the city’s 10 million residents.
Fujitsu and Fujitsu Indonesia built this system under contract from the Indonesia office of the Japan International Cooperation Agency (JICA Indonesia).
Residents will use the smartphone app to send pictures and comments, and based on their smartphone GPS locations, the system plots and aggregates rainfall amounts and river levels on a single map. Residents can also view this information using the smartphone app. The system is linked to BPBD DKI Jakarta’s existing Disaster Information Management System, so that in the event of a disaster, alerts issued by the agency are sent in real time to all smartphones that have the app installed. 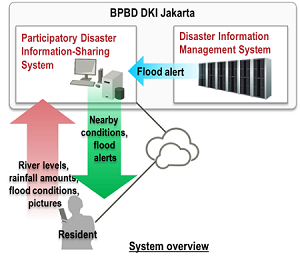 Compared to a sophisticated network of monitoring equipment, such as water-level sensors, this system is relatively easy to deploy, and it provides the city more information on river levels and rainfall amounts as the number of residents using the app increases. Being a solution suitable for Jakarta Capital City, JICA Indonesia anticipates that this system will increase awareness of disaster prevention and mitigation among residents.

Leveraging its track record of building and operating disaster-response systems in Japan, the Fujitsu Group is committed to proposing optimal ICT solutions for disaster prevention and mitigation to countries around the world.

With extensive flooding in 2002, 2007, 2012, and 2013 that adversely affected a great number of residents and the regional economy, Indonesia’s Special Capital Region of Jakarta has sought to improve its disaster-response capability, and in December 2013 rolled out a Disaster Information Management System (DIMS) created by Fujitsu (see February 5, 2014, press release).
But the only means that citizens had to receive disaster information were radio, television, and the BPBD DKI Jakarta website. Furthermore, BPBD DKI Jakarta was hard-pressed to secure funding to build a sophisticated network of monitoring equipment, such as water-level sensors, and so was constrained in its ability to collect information. JICA Indonesia stepped in to help deploy this system, which uses smartphones, which are widely used in Indonesia.

Features and Benefits of the Participatory Disaster Information-Sharing System

1. Residents collect information on river levels and rainfall and share with the community 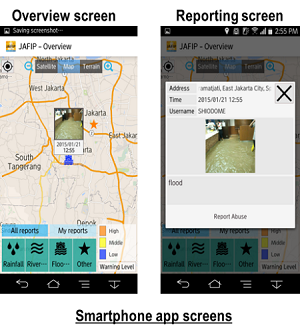 By installing the app provided by BPBD DKI Jakarta on their smartphones, residents can easily send information to the system regarding observed river levels and flood conditions. They can indicate river and rainfall levels in three stages—notice, warning, and flood—and include photographs and descriptive text, which are transmitted with automatically generated timestamp and GPS data.

The system plots all of the reports received from residents on a single map of the city. Citizens can view that map in the app to check river levels in areas of interest and flood conditions around their own homes, as reported by fellow residents. 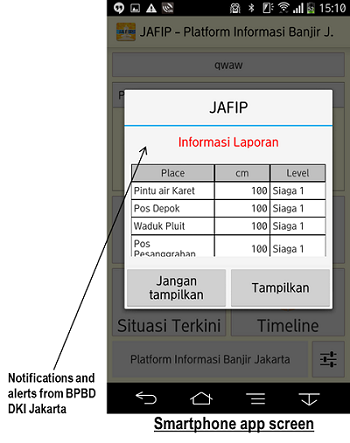 The new system ties into BPBD DKI Jakarta’s existing Disaster Information Management System, so that when BPBD DKI Jakarta issues a flood warning using DIMS, the information is automatically pushed to all smartphones that have the app installed to alert residents.

Previously, the only means that residents had for receiving alerts were television, radio, and the BPBD DKI Jakarta website. The addition of this feature ensures that a great number of residents will receive alerts quickly, empowering them to take appropriate disaster-prevention and mitigation measures.

Fujitsu is the leading Japanese information and communication technology (ICT) company offering a full range of technology products, solutions and services. Approximately 162,000 Fujitsu people support customers in more than 100 countries. We use our experience and the power of ICT to shape the future of society with our customers. Fujitsu Limited (TSE:6702) reported consolidated revenues of 4.8 trillion yen (US$46 billion) for the fiscal year ended March 31, 2014.
For more information, please see: http://www.fujitsu.com

PT. Fujitsu Indonesia was established in 1995 under the name PT. Fujitsu Systems Indonesia. Headquartered in Jakarta with service centers in several cities (Surabaya, Medan, Makassar, and Denpasar) and 99 authorized service providers across Indonesia, Fujitsu Indonesia has a vision to become a provider of leading customer-focused IT, communications and business solutions. As a local IT provider with global capabilities, the company has a comprehensive line of business, including the Applications Services, Enterprise Solutions, Infrastructure Services & Solutions and Managed Services. Portfolio customers scattered in various sizes and segments such as financial services industry, government, manufacturing, education, retail, oil and gas, and telecommunications, including telecommunications companies and the largest manufacturer in Indonesia.

Certified ISO 9001:2008, PT. Fujitsu Indonesia implement a quality management system registered to the international standards within the scope of IT solutions and services, and to encourage the adoption of a process approach to improve customer satisfaction. For more information, please visit: http://www.fujitsu.com/id