Health & Safety: For a better quality of life

Accelerating the development of cancer therapies

Cancer and cardiac disease are major causes of death worldwide and top causes in countries such as Japan. In the search for new cures and therapies to treat cancer, researchers recently discovered that it is possible to capture phenomena not visible to the human eye through computer simulations. If the supercomputers that currently support these computer simulations become much more powerful, researchers expect huge advances in the development of medical treatments for cancer and cardiac disease. Various medicines are used to treat cancer. But there is still a lot of uncertainty surrounding the basic mechanisms used by drugs to attach to and act on cancer cells. In the development of new medicines, experiments are conducted one by one on vast numbers of candidate chemicals over long periods of time. The efficiency and side effects of these chemicals are then examined. So it takes a very long time and involves massive financial outlay before new medicines can be released to market.

The availability of high-performance supercomputers may dramatically accelerate this discovery process. For example, they allow researchers to observe medicines and cancer cells at atomic and molecular levels. By reproducing this activity moment-by-moment, supercomputers can show, in a form viewable to researchers, how a medicine attaches to cancer cells and how it suppresses the activities of those cells. These simulations have the potential to accelerate the development of effective therapies and reduce the cost involved.

For better protection against natural disasters. 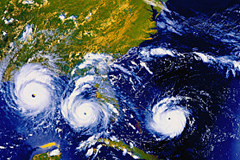 Scientists are hoping that supercomputers will allow them to forecast the weather and predict natural disasters with much greater speed and accuracy, thus enabling more effective disaster-prevention technologies and response plans.
At present, the surface of the Earth is divided into grids ranging in size from a few kilometers to several dozen kilometers. The values for temperature, atmospheric pressure, wind and other variables are calculated for each grid based on parameters measured by monitoring sensors. This data is then used for weather forecasting.
Smaller grids are needed to improve the accuracy of meteorological forecasting. However, the amount of the data processed increases exponentially as grids get smaller. Even with today's supercomputers, it takes a long time to process the vast amount of data gathered.
High-performance supercomputers will allow scientists to divide the surface of the earth into finer grids. This will allow meteorologists, for example, to predict local storms and torrential rains more accurately than ever before.