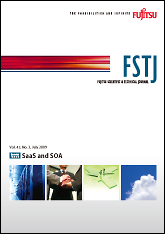 
Fujitsu aims to develop a SaaS service model by establishing reliable services that can satisfy the needs of customers by leveraging the expertise it has developed and the collaboration it has with its partners. This special issue describes its expertise with SaaS and the service oriented architecture (SOA) developed in the field of consulting and systems integration collectively by members of the Fujitsu Group, both inside and outside Japan. There are the following three themes: 1) SaaS business in the global market, 2) SaaS business in the Japanese market, and 3) Trusted Cloud computing: Service Oriented Platform.

1. Preface (519 KB)
In the emerging global market for Cloud computing, Fujitsu together with its global partners intends to provide end-to-end services that completely cover systems integration, SaaS/PaaS/IaaS, and platform products by leveraging its advanced technologies and green data centers, which will be operated with a strong awareness of the importance of the environment. It would be my greatest pleasure if readers of this issue could obtain insights from our technologies and if these ideas could contribute to the improvement of their businesses. ---[Takanori Katayama, Corporate Vice President and Product Marketing Unit President]

2. SaaS and Integration Best Practices (759 KB)
The rising adoption of software-as-a-service (SaaS) applications by enterprise organizations has been driven by deep dissatisfaction with on-premise applications, which require organizations to purchase and deploy infrastructure, overstock on licenses, and pay for expensive resources for customizations, upgrades, and on-going maintenance. The large upfront investments combined with unpredictable costs and an immeasurable return on investment have prompted organizations to seek cheaper less-risky alternatives. Many have found that SaaS applications, which require minimal or no infrastructure and maintenance, can be deployed quickly and have a predictable cost model representing less risk and a faster return on investment. The new demand has led to rapid innovation in SaaS applications, SaaS platforms, third-party SaaS add-ons, and SaaS integration tools. However, enterprise organizations still have the burden of integrating these applications with their back-office systems and on-premise applications, without which the SaaS applications have little to no value. Complex enterprise integration requirements challenge even the best SaaS solution providers today; there are still limitations and pitfalls to be wary of. In this paper, we describe some SaaS integration best practices, present a case study, and highlight emerging integration technologies that can help ease the burden of integrating SaaS applications. ---[Henry Hai, Seitaro Sakoda]

3. Fujitsu's Approach to SaaS in Japan—Fujitsu SaaS Platform— (1.43 MB )
Software as a service (SaaS) and related services have appeared in recent years as an evolution of the application service provider scheme. SaaS enables corporate users to use services that are already being provided instead of constructing and owning business systems on their own. This has an immediate positive effect on business value such as reduced IT investment and new market development. The concept of Cloud computing, which makes use of new virtualization technologies, has also just emerged and an expansion toward Cloud services that encompass conventional data-center services and SaaS-related services is under way. This paper describes Fujitsu's approach to SaaS business in Japan as a first step toward global expansion, focusing on a SaaS platform that will provide core service functions to support this transition from existing SaaS to future Cloud services. ---[Koji Satake]

4. SaaS—New Engagement Approach in Europe by Fujitsu Services (768 KB)
While Software as a Service (SaaS) growth is being driven by the North American market, Europe is beginning to pick up the pace. We have seen a general acceptance of SaaS-based customer relationship management (CRM) within target customers covering small, medium and enterprise-level businesses and have been able to define what it takes to be successful. The current global financial crisis, whilst causing a general slowdown in business spending, will probably lead to a sharper focus on cost reduction efforts and profitable channels and, we believe, generate additional interest in SaaS. Nevertheless, the European market, especially outside the UK, is different from the North American one and adoption trends cannot merely be replicated: cultural and language differences and a prevalent distrust of North American sales techniques demand a specific if not entirely new approach if organisations are to be successful. The European market is still in its infancy with no single vendor dominant, although some such as Salesforce.com are making significant progress within niche areas; for example, Salesforce.com now dominates the European CRM sector in terms of sales volume. Fujitsu Services believes that it is well positioned to help existing and new clients embrace SaaS and this paper looks at general adoption trends and sets out our approaches for delivery and growth in the European marketplace. ---[Colin Burrell]

6. Construction of SaaS-Based e-Learning System in Japan (1.18 MB )
Fujitsu's "Internet Navigware" electronic learning (e-learning) application began to be offered in Japan in the alternative format of software as a service (SaaS) in July 2008 after ten years of life as a packaged product. In this paper, I first outline Fujitsu's objective in converting Internet Navigware to a SaaS application and then describe the functional requirements of SaaS applications for reducing operating costs such as a multi-tenant structure and how those requirements were satisfied in Internet Navigware. I also discuss issues that must be considered, especially in the case of a SaaS application, in the basic design of user rights, session control, and operating commands. ---[Norihiko Sakamoto]

7. Web Front Technology: Interstage Interaction Manager (824 KB)
An application with a user interface that allows an end user to directly perform reference or input operations is called a front application. One product in Japan to mention that offers various functions for the building and execution of front applications in a Web environment is Interstage Interacting Manager. Web front applications may be used in many different situations and are required to provide convenience such as operability and response according to the situation of use. To implement user interfaces suited for various business situations, Interstage Interaction Manager employs Web front technologies including Ajax and mashup. This paper describes the technological points and their effects. ---[Masashi Ogawa]

8. LivePoplet: Technology That Enables Mashup of Existing Applications (1.10 MB )
We have developed LivePoplet, a technology that allows the addition of functionality by mashup without modification of the existing Web applications. With the concepts of SaaS and Cloud computing now popular, demand has been increasing within corporations for combining applications freely for use without having to consider whether they are provided internally or externally. By using the LivePoplet technology, flexible cooperation can be easily achieved for direct calling of a Web service from a window of an existing in-company system according to the user's needs, for example, which allows the building of a business system of a new era while making the most use of the existing system. ---[Akihiko Matsuo, Kenji Oki, Akio Shimono]

9. Three Stages for SOA and Service Governance (752 KB)
A service oriented architecture (SOA), which realizes flexible and efficient construction of IT systems, has already been accepted in many companies. In this paper, we show three stages of SOA implementation and the governance required in each stage with the information to manage. CentraSite, the SOA registry and repository jointly developed by Fujitsu and Software AG, provides an appropriate governance mechanism, capable of centrally controlling different types of information. It supports the transition from a non-SOA environment to an SOA environment, the realization of service management processes within organizations and the optimization of IT systems from the viewpoint of service. ---[Masaki Takahashi, Tomonori Ishikawa]

10. Virtual Platform Technologies (3.34 MB )
Cloud computing—providing information technology (IT) capability as a service over the network—has been attracting attention as a result of advances in server performance, storage capacity, and virtualization technology and the deep penetration of broadband networks. It lets users access services from anywhere and share data and even services with other users as the need arises. In Cloud computing, the user has no need to own an IT infrastructure or purchase equipment or bother with system configuration or management. Furthermore, infrastructure service providers can centralize resources, which enables them to lower prices and provide only the services that are needed when they are needed.
In this paper, we outline a Cloud platform for providing an application system infrastructure in a flexible and rapid manner according to the needs of system developers and service providers. We also describe the advanced technologies that make this platform a reality. ---[Hiro Kishimoto, Keisuke Fukui, Riichiro Take]