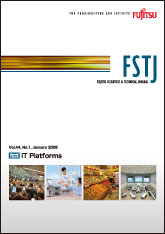 
With TRIOLE, one of Fujitsu's most important goals is to achieve an optimum IT platform that satisfies the three key customer needs of Agility, Continuity, and Efficiency. This special issue describes the efforts being made towards developing basic platform technologies to facilitate the building of an optimum infrastructure to meet these needs, and features some new hardware and software technologies used in server, storage, and network products for IT platforms.

1. Preface (449 KB)
IT systems are a critical business infrastructure, providing leverage for corporations to adapt to today's unforeseeable and rapidly changing business environment in line with the famous phrase "survival of the fittest" coined by Charles Darwin. We could even say that IT systems represent the key success factor for a business to survive and thrive under this constant pressure. ---[Corporate Senior Vice President President, System Products Business Group ]

2. Industrialized IT "TRIOLE" toward Datacenter Optimization (780 KB)
An increasing number of activities in our society have become dependent in recent years on Information Technology (IT), which currently functions as the foundation of government, enterprise business, and many aspects of our daily lives. Given the deepening relation between IT and society, however, new social problems related to IT have emerged. The industrial world has been solving various problems by standardizing products based on new technologies on a continuous basis through industrialization. Fujitsu has challenged the industrialization of IT based on three core technologies: Virtualization, Automation, and Integration. This paper introduces some of Fujitsu's activities geared toward providing optimum systems by industrializing processes related to IT, which is the basis of TRIOLE. It also describes the basic technologies and concepts of TRIOLE. ---[Chiseki Sagawa, Genichi Mitsuhama]

3. Partitioning Technologies and Dynamic Reconfiguration of Mission-Critical IA Server PRIMEQUEST (718 KB)
The PRIMEQUEST series of mission-critical IA servers provides the high performance, reliability, availability, and flexibility required by mission-critical systems on an open platform. In particular, these servers adopt Fujitsu-specific Dual Synchronous System Architecture (DSSA) of the complete independent recovery type, to afford mainframe-class availability. The series also adopts open-standard operating systems (like Linux and Windows), open-standard processors (such as Intel Itanium 2), and optimizers for data centers (to achieve flexible partitioning, multi-OS scaling out, and scaling up). This paper describes some basic technologies of the PRIMEQUEST series, and then explains Extended Partitioning (XPAR) and Dynamic Reconfiguration (DR). XPAR provides up to 16 partitions operating as independent systems by separately allocating the PRIMEQUEST resources using DR as the mechanism for reconfiguring these partitions without having to reset the system. ---[Yasufumi Honda, Hironori Kobayashi]

4. Fujitsu's PRIMERGY BX620 S4 Blade Server for Solving Server Consolidation Problems (603 KB)
Based on a technical analysis of about 9000 business talks given by Fujitsu for customers, we found that amid the ongoing IT system optimization at enterprises, blade servers had become an increasingly important IT platform for optimizing infrastructure. We also discovered that about 80% of our customers had introduced blade servers in order to consolidate their own servers. The customers expect this consolidation of servers to provide management with a global understanding of their IT systems, reduce the heavy workload that server operation imposes on user departments, and curtail IT investment costs in information system departments. However, server consolidation also entails such problems as a more complex network design and increased workload on an information system department. Fujitsu fully understood these server consolidation problems based on extensive consultations on optimizing infrastructure conducted in the past. To solve these problems, Fujitsu developed and marketed the PRIMERGY BX620 S4 blade server. The PRIMERGY BX620 S4 offers superior IT system flexibility by expanding network functions, simplifies operation and management by utilizing virtualization technology, and also reduces power consumption. This paper describes the technologies that provide these advantages. ---[Hideaki Fujimaki, Masakazu Matsubara, Masatoshi Shinoda]

5. Technologies of Enterprise Storage ETERNUS8000 (815 KB)
Recently, there has been a huge increase in the disk capacity of storage devices now being connected to multiple servers. Even when the servers undergo a scheduled stop, these storage devices must operate continuously for 24 hours a day year-round. This necessitates the development of highly reliable, high-performance devices that can be used without stopping even when a faulty part is replaced, a new firmware function added, or the system configuration changed. For this purpose, Fujitsu has developed technologies for nonstop operation by using an advanced redundant-hardware configuration, based on mainframe technologies acquired in the past. This paper introduces the technologies of the ETERNUS8000 - the latest enterprise storage device developed by Fujitsu. It first describes the hot-swapping technology that supports redundant copying, cyclic mirroring, and hot firmware swapping for nonstop operation. Then it describes such data guarantee functions as disk encryption and RAID migration, and the QuickOPC and SnapOPC backup functions. The paper concludes by explaining the remote maintenance functions that improve the maintainability of the ETERNUS8000. ---[Jun Ishikawa]

7. Server Virtualization Technology and Its Latest Trends (587 KB)
IT systems have become increasingly larger and more complex, thus making it more difficult to build an optimal IT infrastructure in today's rapidly changing business environment. Server virtualization represents a base technology for addressing this problem. It enables the flexible construction of virtual servers with almost no hardware limitations, and consequently reduces the total cost of ownership (TCO) and makes it easier to use virtual servers in the changing business environment. Fujitsu supplies server virtualization technology in the form of the Virtual Machine Function for the "PRIMEQUEST" mission-critical IA server and "PRIMERGY" PC server. The Virtual Machine Function is based on Xen open-source technology. This paper describes the background behind and latest trends in server virtualization, and outlines Fujitsu's Virtual Machine Function and the Xen architecture. It then describes our development of various technologies for mission-critical systems. These technologies include large memory management, I/O processing optimization and enhancement, and RAS enhancement. This paper concludes by describing our future plans for server virtualization. ---[Yoshihiko Oguchi, Tetsu Yamamoto]

8. Automation Technology for Virtualized Systems (802 KB)
There has been a recent trend toward consolidating burgeoning systems onto blade servers in order to optimize IT infrastructures, maximize system investment efficiency, and reduce server power consumption. This trend heightens the demand to increase the efficiency of system integration and operation. Moreover, in line with the increased performance of multi-core CPUs and advances made in virtualization technology, more systems are being consolidated on blade servers. This consolidation entails making configuration changes, while balancing overall system resources and maintaining stable operation. Consequently, such consolidation is imposing a heavier workload on system managers. To address this problem, Fujitsu developed the Systemwalker Resource Coordinator Virtual server Edition (SRC VE) to reduce the system manager workload, and dramatically increase the manageability and availability of blade server systems. This paper describes the conventional technologies of SRC and introduces the following technologies of the new SRC VE package: integrated server management, Storage Area Network (SAN) virtualization management, and server orchestration for automatic resource assignments and changes. ---[Takashi Fujiwara, Yoshinobu Hibi, Shigehiro Yoshikawa, Hiroshi Yazawa]

9. Innovative Technologies Realizing Compact PRIMERGY TX120 Server (846 KB)
The need for internal control in enterprises reflects a growing market demand in recent years for data integrity. In line with this trend, enterprises that previously used PCs for data management are now introducing server systems for centralized data processing. For such introduction, customers tend to rely on three main points in selecting a server: size, low noise, and low power consumption. At the same time, innovations are being made in space-saving technology and low power consumption technology. Given these market trends and technological innovations, Fujitsu has introduced the PRIMERGY TX120 - a compact server that achieves 1) small size, 2) low power consumption, and 3) low noise. The server is so small that it can be installed on a desk next to a desktop PC. It incorporates space-saving technology such as a 2.5-inch hard disk drive (HDD) and component miniaturization, energy saving technology applied to parts that consume low power and a pulse width modulation (PWM) fan, and low-noise technology such as a heatpipe and push-pull fan cooling system. Concerning its reliability as a server, the PRIMERGY TX120 utilizes reliability technology equivalent to that of conventional 1-way servers. ---[Akinao Tanikawa, Tadashi Mantani, Noriaki Kobayashi]

10. Power Noise Analysis of Large-Scale Printed Circuit Boards (1.31 MB )
Recent increases in digital-equipment operation frequency and decreases in LSI supply voltage have caused various noise problems relative to LSI, packages (PKG), system in package (SIP), and printed circuit boards (PCBs). These problems entail power-and-ground bounce noise, simultaneous switching noise, and EMI noise. Solving these problems requires a long development period and high costs. The authors have developed a new power noise analysis system as a computer-aided design (CAD) system, and applied it to equipment design. This system optimizes noise countermeasure design by performing large-scale simulation to unify the LSI and PCB design for all stages from the upper stage to the verification stage of final design. We confirmed that this system greatly reduced the time and cost of redesign necessary to solve noise problems. This paper introduces the features of this system, and describes the results of its application to high-end servers. ---[Toshiro Sato, Hiroyuki Adachi]

12. Trends in Shared Services in the UK Public Sector and the Approach of Fujitsu Services (549 KB)
In response to the 2004 spending review by HM Treasury, the UK government outlined a strategy to introduce shared services in the arena of corporate services in order to increase efficiency. This initiative has now begun to gather some momentum. However, such projects often face challenges specific to the public sector as typified by "organisational silos", lack of experience in cross-organisational working, and budgeting and procurement problems. Various attempts have been made to address and overcome those issues. Given its broad experience, Fujitsu Services believes that there are two key factors crucial to overcoming those issues. The first is establishing appropriate governance that covers all stakeholders concerned; the second is that projects must focus on actually realising the benefits being targeted to achieve. This paper describes these two points and uses concrete examples to illustrate both. ---[David Tryon, Nick Woodward]