Fujitsu Limited today announced the launch of Fujitsu Technical Computing Solution GREENAGES Citywide Surveillance V3, a privacy-conscious AI-based image analysis solution that measures the impact of and engagement with advertisements in public places, such as digital signage, based on the number of viewers and their attributes. Developed by Fujitsu to create new business models of public advertising and contribute to urban development with better understanding of user experience, the solution is relevant for ad agencies and advertisers, as well as facility managers for such large-scale facilities as train stations and airports in order to better understand the target audience user experience. Starting sales in Japan today, the solution is planned to launch in Asia and Europe during the next fiscal year starting in April 2020.

GREENAGES Citywide Surveillance employs AI technology from Fujitsu Human Centric AI Zinrai to analyze images from cameras placed around a city or in a facility without identifying the people in the images. It automatically extracts a variety of information on people and vehicles, capturing real time movements throughout a city. This smart city monitoring solution aims to create urban areas where people can live comfortably and with peace of mind, as it can also detect suspicious behavior, such as surreptitious peeking. New features have been added to the solution to capture real time actions and characteristics of groups of people, such as their viewing direction, gender, and age, without identifying individuals. These features aid advertisers in better understanding the frequency and level of engagement by viewers in public places, such as train stations, airports, and shopping malls.

With this solution, Fujitsu aims to further vitalize urban areas by creating new business models for advertising in public places. Focusing on the viewers' interests and behavior, the solution will enable digital signage to be placed based on the number of viewers, and display dynamic advertising based on target audience viewing duration. The solution can also provide guidance information and optimized routing of population flows based on the characteristics of people entering a facility.

Since its first launch in October of 2016, GREENAGES Citywide Surveillance has been used by security-related institutions, transportation infrastructure providers, and corporations as image analysis software aiming to create comfortable and safe urban areas. In May 2018, its features were enhanced to support applications spanning a wide variety of city scenarios. For example, beyond just detecting and measuring the number of people or vehicles, its detection features were expanded using AI technology to distinguish the characteristics of the clothes people wore as well as the color, model, and manufacturer of vehicles. In addition, a feature was added to deliver the analysis results through an API.

Applying the solution to other fields, Fujitsu has now launched GREENAGES Citywide Surveillance V3. Measuring the value of advertisements in public places has been a challenge in the advertising industry for many years.

The solution can calculate the number of people who pay attention to advertisements, the amount of time people look at them, and the viewership rate for advertisements by evaluating the viewing direction of large groups in videos taken from cameras installed near digital signage and billboards, without identifying specific individuals. Moreover, based on factors such as the angle and direction of a person's head, the solution can detect their viewing direction even when they are relatively small in the image or when their faces are not visible. The technology that outputs viewing information suited for measuring advertisement value is patent pending. 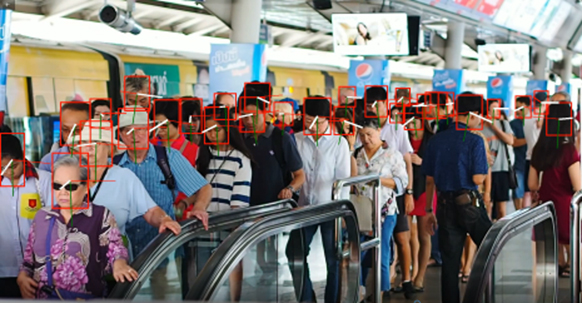 Without identifying individuals, this solution estimates the age and gender of people in crowds. Even when a crowd is milling about randomly in the street, when the individual people are quite small in the field of view, and even when their faces are not visible, the solution can estimate attributes based on physical characteristics such as hairstyle and clothes.

*The above prices do not include expenses such as fees for network communication, cloud platforms, or hardware (cameras or video analysis devices).
*The solution is planned to launch in Asia and Europe during the next fiscal year starting in April 2020.