Both new models feature support for connections to Fujitsu mainframes from its Fujitsu Server GS21 series, supporting ICT infrastructure for key systems in the mission-critical field.

In recent years, in the mission-critical field that supports society's infrastructure, including finance, transportation, and energy, there has been a demand for the creation of business in new areas utilizing ICT, such as fintech, smart cities, and smart grids. The ICT infrastructure supporting these efforts requires even higher performance and operational flexibility, including resource extension and the simultaneous high-speed processing of large volumes of data.

Features of the New Models

The ETERNUS DX8900 S4 delivers performance of up to about 10 million IOPS, 1.3 times that of conventional models(2), in applications connected to open systems. This is due to the use of high performance CPUs in its storage controllers(3) and memory capacity about 3 times conventional models. In addition, cache response has been improved by installing NVMe(4) SSDs(5) capable of high response speeds as a secondary cache.

In applications connected to open systems, the ETERNUS DX8900 S4 reduces data storage capacity usage by about 50% while limiting the impact on performance by incorporating a new dedicated chip to handle data compression processing in real time. This enables efficient operations that reduce the amount of storage media needed. With support for high-capacity SSDs of up to 30TB, this enables the building of low-cost system infrastructure.

Both new models can be connected to Fujitsu's GS21 series of mainframes, which the company plans to continue to offer through 2030 and beyond. The new models therefor support the ICT infrastructure of core systems in the mission-critical field, where high reliability is needed. The ETERNUS DX8100 S4 is also available in an all-in-one format, incorporated into the storage unit within GS21 models, delivering a compact server structure that reduces installation space by up to 40% compared to conventional models. 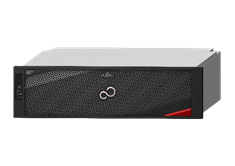 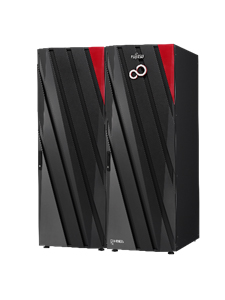