Today, Fujitsu announced that the array control system recently deployed for the Institute of Cosmic Ray Research (ICRR), University of Tokyo, to be used in the Cherenkov Telescope Array (CTA), a gamma ray observatory capable of observations with a sensitivity aiming to be more than ten times greater than existing gamma ray telescopes, has now commenced operations.

The CTA, an international joint research project of 33 countries, will conduct observations of cosmic gamma rays by looking at the Cherenkov light emitted when high-energy gamma rays from across the Universe collide with the earth's atmosphere. In addition to the discovery of a diverse variety of high-energy celestial objects, these observations will enable the CTA to perform research into the origins of cosmic rays and supermassive black holes, as well as search for dark matter.

Fujitsu's array control system was installed next to a gamma ray telescope located at 2,200 meters in altitude within the Roque de los Muchachos Observatory--one of the world's five largest observatories--on the island of La Palma, in the Canary Islands, Spain. This system, comprised of Fujitsu servers and storage, will conduct a variety of operations in real time, including storing the raw gamma ray observation data, analyzing the amount of gamma rays, and simulating their arrival direction.

With this, Fujitsu is supporting observations with the world's largest-scale gamma ray telescope, contributing to CTA's mission of discovering more than 1,000 diverse high-energy celestial objects, and of understanding the formation of the Universe. 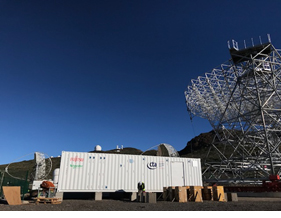 Photo 1: Exterior of the container housing system (telescope in photo is under construction) 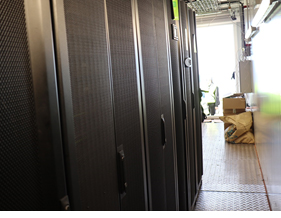 The CTA, launched in 2006 as an international joint research project, will conduct observations of gamma rays with a level of sensitivity aiming at ten times that of existing gamma ray telescopes. It will have an array of about 100 telescopes that see Cherenkov light, deployed over an area of 3 kilometers. Initially, with observation facilities for the northern hemisphere set up on La Palma, in the Canary Islands, Spain, and then after 2019, by subsequently setting up facilities in Chile for observations in the southern hemisphere to achieve panoramic observations, the CTA is set to become the world's largest-scale gamma ray observatory.

Fujitsu has also previously provided control systems to research institutions and other organizations for massive radio telescopes, optical-infrared telescopes, and neutrino observation. Now, in deploying this array control system for the Institute for Cosmic Ray Research, University of Tokyo, which is handling telescope facilities for the northern hemisphere, Fujitsu is contributing to resolving previously unsolved mysteries of the Universe by providing stable, continuous operations in a harsh environment.

The control system was installed inside a shipping container at an elevation of 2,200 meters. When something like a sudden celestial phenomenon is discovered during observations, which take place at night, analyses of the gamma rays and their characterization are conducted immediately using the control system. Those results can then be used to send alerts to other gamma ray telescope facilities, helping to optimize observation schedules. In addition, data collected and analyzed during overnight observations is transmitted to the data management center in Germany during the day.

This system employs 64 Fujitsu Server PRIMERGY CX2550 M2 x86 servers, with a total of 2,048 cores, for the processing equipment for high-performance analysis and the telescope control server. Fujitsu Storage ETERNUS DX200 S4 is used to store the huge volumes of collected data, providing an effective capacity of three petabytes. In order to provide high-speed data access, the system uses EDR InfiniBandTM high-speed interconnects that enable 100-gigabit-per-second communications between the processing equipment and telescope control, and the high-capacity storage. 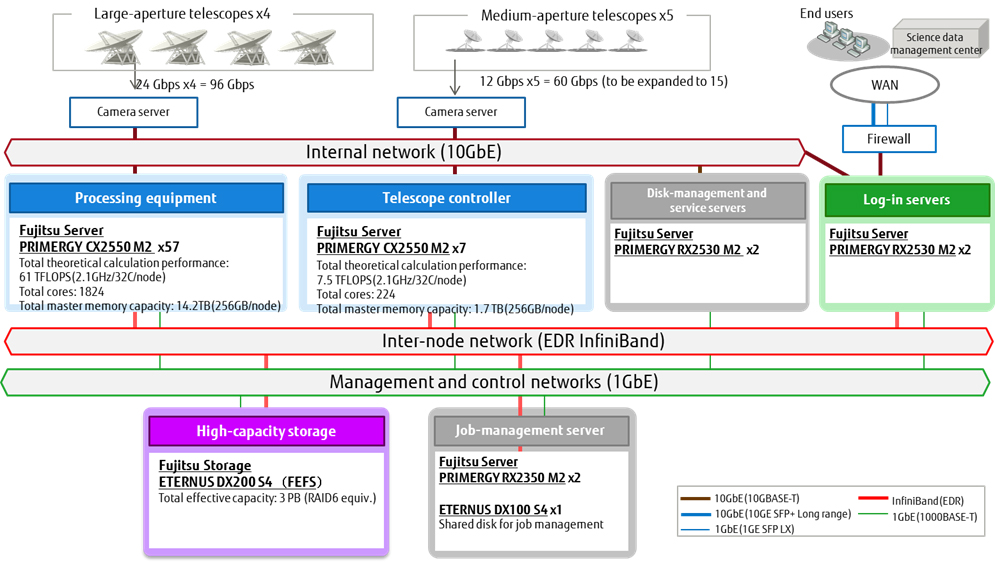 With the computing system provided by Fujitsu, we can collect and analyse huge amounts of data from CTA, which will achieve the world's best sensitivity as the instrument for high energies. CTA will expand the visible horizon of the Universe with high-energy gamma rays and deliver information on dynamical and explosive phenomena, on the high energy radiation from supermassive black holes, and the newly born black holes. It is also possible to explore the nature of dark matter which is a major component of the Universe, owing to 25% of its mass. CTA observes the high energy gamma rays at tera-electron-volt energies, which is comparable to the maximum reachable energy in particle collisions with the world largest accelerator LHC.

CTA is expected to not only provide us with fundamental knowledge on high energy phenomena in the Universe but also a deep insight into the constitution of the Universe, dark matter, and ultimately on the nature of space and time.