Fujitsu Limited and Fujitsu Kyushu Network Technologies Limited have been recognized at the Japan Nature Conservation Awards for an initiative that provides software in support of habitat surveys for the Blakiston's fish owl, an endangered species. In the initiative, the two companies have since 2012 provided the Wild Bird Society of Japan with a software program that automatically extracts the owl's calls with high accuracy. Using this program greatly reduces the number of people and the amount of time required to analyze the audio data, which enabled the survey to cover a larger area, and to be conducted at more frequent intervals. As a result, it has contributed to the confirmation of the owl living in areas beyond those that were known habitats.

The Fujitsu Group will continue to promote preservation of biodiversity using ICT in order to bring about a sustainable and flourishing society going forward. 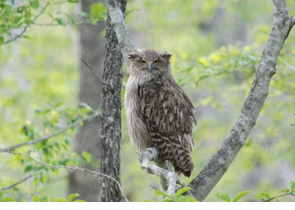 Photo courtesy of the Wild Bird Society of Japan

About the Japan Nature Conservation Awards

The Japan Nature Conservation Awards, hosted by the Nature Conservation Society of Japan, recognize outstanding initiatives by individuals, groups, corporations, and local governments that contribute to the conservation of nature and the preservation of biodiversity throughout Japan, with the goal of promoting the creation of regions and societies where people live in harmony with nature.

Fujitsu has provided the Wild Bird Society of Japan, which is carrying out habitat surveys in order to protect the Blakiston's fish owl, with an owl-call recognition program that automatically recognizes and accurately extracts the owl's calls. This technology improved the efficiency of the survey and its detection accuracy, in part by greatly reducing the time required for audio-data analysis, enabling both the area of the survey and frequency to be expanded. This also led to confirmation that the owl is living in areas other than those that were known habitats, contributing to biodiversity management and expansion.

The Blakiston's fish owl, which lives in Hokkaido, has been designated as an endangered species on the Ministry of the Environment's Red Data Book. The Wild Bird Society of Japan established a wild bird sanctuary for preserving the Blakiston's fish owl, and is carrying out surveys to understand the habitat and population of the owl. Previously, the society placed digital recorders in the area thought to be the habitat of the Blakiston's fish owl, and then relied on people listening to the recorded audio data to check for the owl's calls. With this method, it took about one hour to analyze three hours of recorded audio data.

In 2012, Fujitsu offered the Wild Bird Society of Japan a software program developed by Fujitsu Kyushu Network Technologies Limited that automatically and accurately extracts only the sounds of the Blakiston's fish owl from recorded audio data, using voice-recognition technology developed for mobile phones. As a result, it became possible to analyze three hours of recorded audio data in two or three minutes. This shortened analysis time made it easier to increase the number of survey locations, expanding the survey area and frequency, which has contributed to the confirmation that the owl is living in areas other than those that had been previously known habitats. 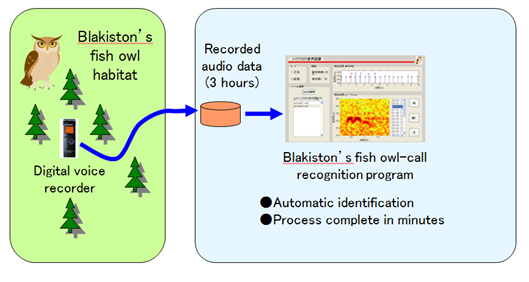