Utilizing a Fujitsu Group audio processing technology that recognizes human voices, Fujitsu developed a software program that takes audio data recorded in the owl's habitat and, with high precision, is able to automatically recognize and extract the calls of the Blakiston's fish owl. This technology will help make the study of the owl's habitat more efficient and accurate.

Applying ICT to preserve biodiversity is a priority measure in the Fujitsu Group Biodiversity Action Principles. 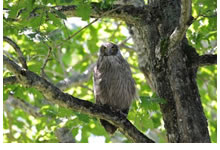 Photo courtesy of the Wild Bird Society of Japan

The Blakiston's fish owl has been designated as a critically endangered(1) species on the Ministry of the Environment's Red List. In the central and eastern areas of Hokkaido in Japan, the existence of only 140 of the owls has been confirmed. With the objective of establishing a sanctuary to protect these owls, the Wild Bird Society of Japan has been conducting research to better understand owl habitat and numbers. Previously, approximately ten researchers were positioned in these areas from early evening for several hours to listen and confirm with their own ears the calls made by owls. From October 2011, however, IC recorders were placed about 500 meters apart on roads in the owl's habitat to record sounds at 284 locations in 18 geographic areas. The next day the collected audio data would be played back using commercial audio analysis software. It was up to the researchers themselves to identify any owl calls, either by a visual inspection of the audio spectrum or by listening to recordings. The task of manually processing three hours of audio data would take about one hour, so improving the efficiency of the study was an important issue. Another problem was the difficulty of detecting the recorded owl calls when the owls are far away.

Blakiston's fish owls often live together in male-female pairs and, from evening into the night, have a habit of continuously making their calls from the same location. When the male and female are exchanging their calls, the identifying characteristics of the male's call show up in the pattern of the audio spectrum. Given this, Fujitsu developed a software program that automatically recognizes these audio patterns and extracts the calls with high precision.

Using this program enables the time spent on analysis to be cut to two to three minutes, thus significantly improving the efficiency of the study. In addition, it enables owl calls made from a distance, which sometimes went undetected in manual processing, to now be detected, thus contributing to an improvement in the study's accuracy. 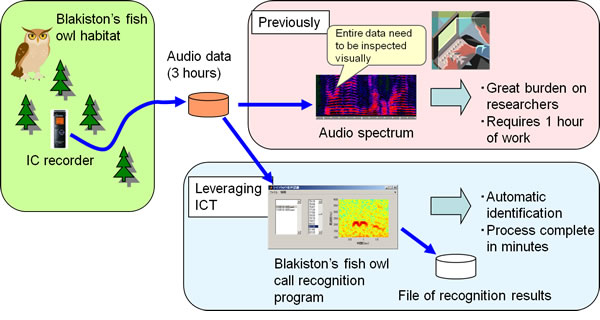 In the Blakiston's fish owl habitat study, one of the current problems is the time-consuming work involved in setting up and collecting the IC recorders at each study location. To reduce the amount of time spent on this work and to enable the study to continue to be conducted in the winter when the snow is very deep, the future use of a multi-sensing network(2) developed by Fujitsu is under consideration. In addition, Fujitsu will support the protection of Blakiston's fish owls by using ICT to make the study even more sophisticated, such as by enabling the identification of individual owls. Fujitsu will continue its commitment to "Applying ICT to Biodiversity Conservation" as stated in the Fujitsu Group Biodiversity Action Principles.