Deviation value boosted in NII AI Project "Can a robot get into the University of Tokyo?"

The National Institute of Informatics (NII), Fujitsu Laboratories Ltd., and Nagoya University today announced that their math team has achieved a deviation value of over 64 on a practice mathematics test as part of their artificial intelligence project called "Can a robot get into the University of Tokyo" (also known as "Todai Robot"). The project was launched by NII in fiscal 2011, joined by Fujitsu Laboratories in 2012, and by Nagoya University in 2013. Joint research on the project has been underway since 2012, led by these three organizations.

Through the Todai Robot project, Fujitsu Laboratories will continue to work with NII and Nagoya University to develop AI technologies that take social acceptance into account to create a Human Centric Intelligent Society.

For more information on the practice test, see http://21robot.org/?lang=english

The Todai Robot project was launched at NII in April 2011 by Professor Noriko H. Arai. Its goal is to score high marks on the exam of the National Center for University Entrance Examinations ("Center Test") by fiscal 2016, and to reach the threshold needed for admission to the University of Tokyo by fiscal 2021. The Todai Robot has been attempting a practice test every year since fiscal 2013, both to measure the success of the past year's work and to identify the technical issues that remain. The mathematics team has attempted the Center Test's practice tests (mathematics IA and IIB), and the University of Tokyo's entrance exam pre-tests (for humanities course and science course). In fiscal 2013, with the Yoyogi Seminar college-prep school cooperating to administer the test, they answered two out of four math questions for the humanities course and two out of six math questions for the science course, which represented a deviation value of approximately 60 among all test-takers.

AI converts problem texts expressed as natural language and mathematical expressions into a form that can be executed by a program, and solves the problem using a computer algebra program (a solver). Up until last fiscal year, problems were solved using a technique based on iterative transformations of expressions called "quantifier elimination"(2). This was able to solve problems in a wide range of mathematical areas in entrance-exam problems, including quadratic functions, linear algebra, algebra, and geometry, using general-purpose methods for solving problems dealing with polynomial-expression equality or inequality. In fiscal 2013, partial human intermediation for language processing was allowed, and this led to a deviation value of 60 on the University of Tokyo entrance exam pre-test.

But the method of transforming expressions is limiting, because there are problems that cannot be calculated within the test's time limits, and areas of mathematics that cannot be handled at all (including sequences, probability, statistics, integer problems, trigonometric and exponential functions). Therefore, a new approach was needed in order to earn a higher score.

By speeding up the expression-transforming solver and developing a new solver that can handle areas of mathematics that had been off-limits, the team achieved a deviation value of 64 (75 points) on the mathematics IA section of the Center Test's practice test, and a deviation value of 65.8 (77 points) in the IIB section. These results are the product of the two technologies described below. 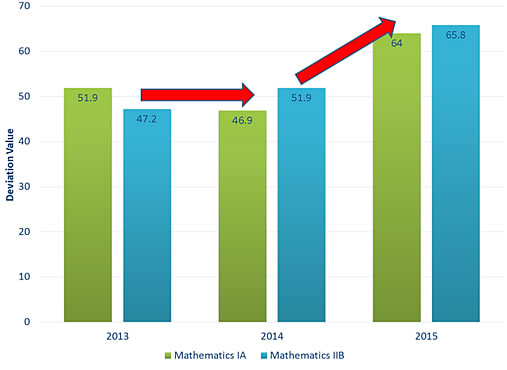 This year, Maplesoft of Canada and Cybernetic Systems Co., Ltd. provided the Todai Robot mathematics team with Maple, the computer algebra system with an environment for developing computer algebra programs.

Problems on the mathematics entrance exam need to compute expressions accurately. Ordinarily, computers use numerical operations, which they can process very quickly, but because they include rounding errors, they do not lend themselves to solving entrance-exam math problems. Conversely, a computer algebra technology for calculating expressions with no rounding errors will wind up creating massive expressions as intermediate computational steps, which increase computing time. These massive expressions typically include many redundant terms, but to date there has been no good way of removing them efficiently.

Fujitsu Laboratories developed a technique for removing redundant terms that the solver was handling that uses the results from numerical operations and determines which parts do not affect the answer. This had the effect of accelerating the solver, and of the problems handled by the solver in this fiscal year's Center Test practice exam, all could be solved in the time allotted.

2. Developing a sequences and statistics solver

Research and development on automated solvers for sequences and statistics was conducted in cooperation with the Tokyo University of Science and the University of Tsukuba. 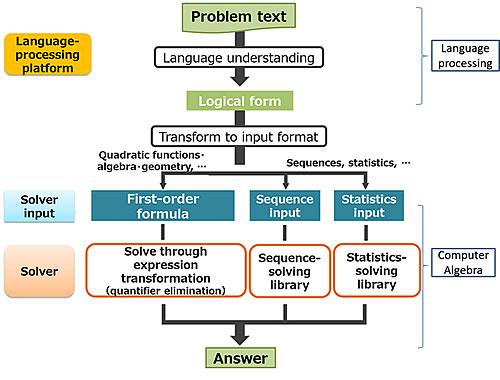 The mathematics team on the Todai Robot project is working on ways to express problem texts in the language-processing phase, reducing the time to solve a problem, and applying automatic-solving to areas of math that were previously off limits. Work is also continuing on automating the part of language processing where human assistance had been used, in transforming problem texts to expressions.

The work of the mathematics team is the product of researchers in a wide range of specialties, from natural-language processing and mathematics, from Nagoya University, the Tokyo University of Science, and Tsukuba University, in an industry-academia partnership to pursue research. The Todai Robot shows how this kind of cross-disciplinary research contributes to cultivating more well-rounded people with a depth of specialization and a breadth of knowledge, and more sophisticated problem-solving abilities.

Through the Todai Robot project, Fujitsu Laboratories will continue to work on the development of advanced language-processing technologies and mathematic techniques, and will continue its work on developing artificial intelligence technologies that take societal receptivity into account for a human-centric intelligent society.

About The National Institute of Informatics