Fujitsu to Participate in Artificial Brain Project, "Can a Robot Pass the University of Tokyo Entrance Exam?"

Participation as the "math team" for National Institute of Informatics project

Led by NII professor Noriko Arai, Todai Robot was started in 2011 with the aim of once again bringing an integrated approach to research into artificial intelligence (AI), a field that had grown fragmented since 1980, as a way of opening new horizons. The goal of the project is to enable an artificial brain to score high marks on the test administered by the National Center for University Entrance Examinations by 2016, and to cross the threshold required for admission to Todai by 2021. The project is organized into separate teams for each subject of study, with Fujitsu Laboratories in charge of the math team.

For many years, Fujitsu Laboratories has been researching formula manipulation and computer algebra, which are necessary to exactly solve mathematical problems related to mathematical analysis and optimization technologies. Its participation in the Todai Robot math team starting this year will leverage the technological foundation it has already built.

Fujitsu Laboratories sees its involvement in the Todai Robot math team as a way to develop, along with the NII, the technologies that will be needed for human-centric IT. The hope is that the technologies developed as part of this project will enable anyone to easily use sophisticated mathematical analysis tools, which will lead to solutions for a wide range of real-world problems, and even the automation of mathematical analysis and optimization.

The initiatives of the math team are scheduled to be detailed in "Uniting Natural Language Processing and Computer Algebra to Solve Mathematics Problems" (Akiko Aizawa, Takuya Matsuzaki, Hirokazu Anai), a paper in a special issue on the Todai Robot project in vol. 27, no. 5 of the Journal of the Japanese Society for Artificial Intelligence. 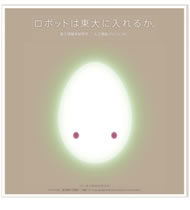 For a computer to solve math entrance-exam problems(1), it must first convert the problem text, which is expressed in natural language and formulas meant to be easily understood by humans, into a form that a program can execute. The next step is for a program known as a "solver" to solve the problem. This requires three processes (see Figure 2).

Getting a computer to understand text that was intended for humans is not an easy task. Using natural-language processing to draw out a semantic representation of the problem text is not simply a matter of analyzing the words. It also involves skillfully integrating mathematical terminology and a high-school level understanding of math. Beyond that, it needs to decide the best way for the computer to solve the problem. Currently only approximately 50–60% of Level 2 entrance-exam problems can be solved, even using computer algebra technology, so the calculation algorithm needs improvement.

As should be clear, each of these steps still poses major theoretical and practical problems, and for each one, the solution will involve an appropriate combination of various technologies. 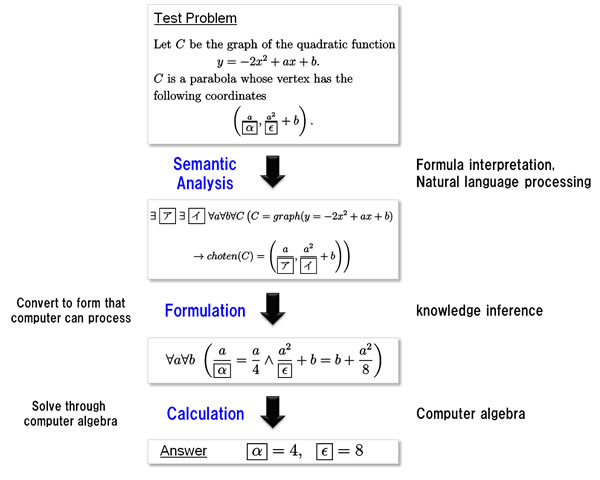 Goals for the Math Team

The team is striving to develop technology at a level that can solve entrance-exam math problems well enough to pass the Todai exam. It goes about this by using an approach to dealing with human knowledge from an information-processing technology perspective.

As for the Todai Robot math section, NII and Fujitsu Laboratories jointly aim to develop the technologies needed for human-centric IT. These include formula recognition methods to recognize and interpret problem texts and put it into a data format that a computer can understand, natural language processing to generate a formula representation that the formula solver can understand, and formula-processing technology that can solve the composed formula quickly and accurately. The hope is that the technologies developed as part of this project will enable anyone to easily use sophisticated mathematical analysis tools.

Through this project, Fujitsu Laboratories seeks to move a step closer to creating an intelligent system that can perform sophisticated mathematical analyses on its own problems.

Goals for the Todai Robot Project

The project is intended to increase the accuracy of the various elemental AI technologies that have been developed up to date, and to integrate them to create future value in information technology, while also deepening our comprehensive understanding of human thought.