Fujitsu Laboratories Ltd. today announced the development of a technology that turns biometric data, such as palm veins, into a cryptographic key. This newly developed technology enhances the security of the encryption method and protects confidential data, such as IDs and passwords.

Now, Fujitsu Laboratories has developed a technology that uses randomized numbers, each different, to convert biometric data into a cryptographic key for use in encryption and decryption. This makes it possible to simply and securely manage an individual's confidential data using biometric data, while preventing the unconverted biometric data from passing through the network.

Fujitsu Laboratories anticipates that using this technology will make it easier and more convenient to carry out biometric authentication to verify the identity of a person accessing confidential data managed on the Internet.

Details of this technology will be presented, in conjunction with Kyushu University and Saitama University, at the 8th International Symposium on Foundations & Practice of Security (FPS 2015), to be held in Clermont-Ferrand, France, starting Monday, October 26th.

The volume of IDs, passwords and other personal confidential data is increasing along with the growth of Internet services. All of this confidential data, being difficult to remember, is increasingly managed with encryption, such as by using AES, the current standard encryption technology. With current technologies, it has been necessary for users to manage cryptographic keys in order for them to decrypt encrypted data by storing cryptographic keys on an IC card or by validating cryptographic keys stored within a PC through password authentication. This therefore elicits a need for a technology that can securely encrypt and manage an individual's confidential data, using biometric data for personal authentication that is inseparable from the individual.

Contactless palm vein authentication technology, first developed by Fujitsu Laboratories in 2003, is used around the world in fields such as identity verification for ATMs in financial institutions, computer access, and facilities access management, owing to its excellent authentication capability. If confidential data could be encrypted using biometrics, the cryptographic key management of earlier encryption technologies would become unnecessary, and confidential data could be simply and securely managed.

Fujitsu Laboratories applied widely used error-correcting codes for the encryption method as the technology to compensate for errors that are typically generated in the transmission route. The system randomly determines different random numbers for encryption and decryption, and using this protects the confidential data and biometric data.

The features of the newly developed technology are as follows.

In encryption, confidential data is converted with an error-correcting code, and a random number is added to the whole. That data is then further converted using an error-correcting code, the feature code(1) extracted from the biometric data is added to generate the encrypted data, and this encrypted data is then registered in the server (Figure 1).

Figure 1: Diagram of the encryption process

Variations in one's motion or position when inputting biometric data can generate slight discrepancies. This leads to discrepancies when calculating the feature code for decryption from the feature code for encryption, but the discrepancy can be absorbed because it is converted using an error-correcting code in advance (1 in Figure 3). Moreover, the discrepancy caused when calculating the random number used in decryption from the random number used in encryption will similarly be corrected when using error-correcting code 2, enabling recovery of the confidential data (2 in Figure 3).

In this way, as the biometric data input for encryption and decryption are similar sufficiently, so long as they are both from the same person, the confidential data can be retrieved from the encrypted data using error-correcting technology. 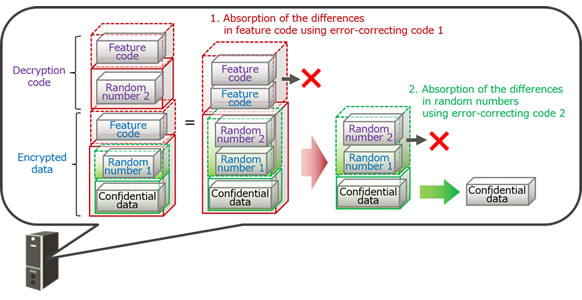 Using this newly developed technology, the cryptographic key management that had been needed for existing encryption technologies becomes unnecessary. Furthermore, because the biometric data used for encryption and decryption are converted with random numbers, it is now possible to simply and securely manage an individual's confidential data using biometric data, while preventing the unconverted biometric data from leaking over the network. This means that the use of encryption technology using biometrics, which had previously been generally limited to use within a personal device, such as a PC, can now expand to cloud services across open networks.

Fujitsu Laboratories will continue to improve the speed of decryption processing and expand the types of information that can be encrypted, while also examining this technology's applicability to a number of potential use cases such as the Social Security and Tax Number system in Japan, with the goal of commercialization during fiscal 2017. It will also examine the development of the feature code, and work to expand the types of applicable biometrics, such as fingerprints.