In contrast to the existing matching process of comparing vein feature patterns, the new method employs feature codes extracted from vein images that represent the features of the images in binary format. This, in turn, allows for simple comparison calculations and rapid authentication. As multiple feature codes can be generated from a single piece of biometric data, different codes can be used for different biometric authentication services. As a result, even in the case of leaked registered data, a new feature code can be generated and registered to give users peace of mind and uninterrupted service.

The new technology is expected to expand the scope of use for palm vein authentication technology, while also enabling a larger number of customers to safely and securely take advantage of biometric authentication.

Generating multiple biometric features from a single piece of biometric data makes it possible to register data that differs according to each service. Moreover, even if the registered data were to be lost, it would be possible to change a conversion method and generate a new biometric feature code, thereby delivering an uninterrupted service with peace of mind. Technology that can generate multiple feature codes from a single piece of biometric data is known as "cancelable biometrics" or "renewable biometrics".

With palm vein authentication, it is possible to enable cancelable biometrics by transforming and storing the original vein image or the extracted palm vein feature pattern based on a conversion method. However, because comparisons require pattern matching processing, as with previous vein authentication technology, the process can be slow. Alternatively, the pattern matching process can be avoided by extracting a feature code that numerically represents the pattern feature of a vein image and matching this feature code through a simple numerical computation. This method reduces processing time but is also problematic in that the feature code is easily impacted by the hand's position (the incline of the hand e.g. tilted forward or to the side) and its shape (e.g. if the hand stretched out or slightly relaxed) when capturing the pattern. Fujitsu Laboratories has developed the world's first technology for extracting and matching feature codes, expressed as 2,048-bit numbers, from palm vein images. Instead of the previous pattern matching process, these feature codes can be matched through a simple mathematical comparison. On a typical personal computer, performing a one-to-one authentication match takes roughly one microsecond, a thousand-fold increase in speed over the previous technology, which took several milliseconds. In addition, the volume of data involved can be reduced by 90%. Furthermore, the feature codes possess strong identification performance, with a false positive rate of 1/100,000. Details of the technology are as follows.

Fujitsu Laboratories developed a technology that extracts 2,048-bit feature codes from palm vein images. The technology segments the image into regions based on the volume of information in each part of the image, extracts feature components from the vein patterns in the regions, and then employs a data compression technology to extract a final feature code with 2,048 bits of data. By adaptively segmenting the image into regions, it is possible to minimize the effects of minor changes to the position or shape of the hand. It also makes it difficult to reconstructing the original image from the extracted feature code.

The feature code is purely digital data, so it can be easily combined with encryption or other security technologies without diminishing authentication performance when converted. Moreover, because the technology makes it possible to generate multiple feature codes from a single piece of biometric data, in the case of data leaks or theft, a new feature code can be generated. This technique can be applied to fingerprint authentication as well as palm vein authentication. 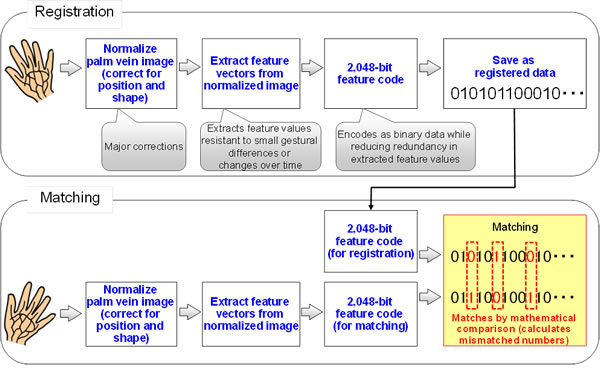 With the aim of commercializing the technology in 2015, Fujitsu Laboratories plans to further improve the image normalization technology in order to reduce restrictions on the hand's position and shape as much as possible, while increasing the accuracy of feature code extraction technology. The company is also working on designing and constructing a biometric authentication platform using these technologies, in addition to studying a wide range of scenarios where biometric authentication can be applied.