Fujitsu China Holdings Co., Ltd. and Fujitsu Limited today announced that Fujitsu China Holdings Co., Ltd. has deployed Pastel Plus, Fujitsu's sales and inventory management system designed for retailers, at the retail stores in China of Williamson-Dickie Apparel Trading (Shanghai) Co., Ltd. (Williamson-Dickie China), which handles business in Asia for Dickies, a casual workwear brand based out of Texas in the United States.

Pastel Plus is a merchandizing automation retail solution for fashion apparel retailers. Based on product management, Pastel Plus performs simulations of strategic merchandise selections and appropriate pricing for use in sales strategies.

Dickies' Asia-Pacific sales region is managed by the regional headquarter located in Japan. For smooth communication between staff speaking different languages based in China and at the regional headquarters in Japan, Pastel Plus is equipped with a function to seamlessly switch between Chinese and Japanese. It also can accommodate Chinese business practices, taxes and local currency transactions, and with links to peripheral systems, such as local accounting software, it can be used to its fullest by both Chinese and Japanese staff. By deploying this system, Williamson-Dickie China aims to reduce lost sales opportunities and, through multifaceted analyses, to develop plans that increase sales in China.

Williamson-Dickie China has already started operation of this system in 13 stores throughout China, and plans to expand it in stages to all of its stores in China. 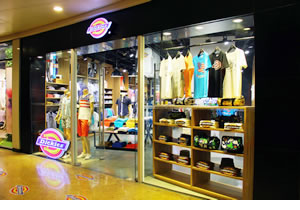 Williamson-Dickie China promotes sales of Dickies in China. To further expand sales, improve accuracy of inventory management, and strengthen the governance of store management, Williamson-Dickie China has started to deploy and operate Pastel Plus, a system with a proven track record in the fashion apparel industry in Japan, for use in its stores in China, a market where it has achieved significant growth and an expansion in the number of its stores in recent years.

Overview of the Deployed System

Pastel Plus automatically identifies products that appear headed for stockouts or overstocks and simulates the volume of display merchandise and appropriate markdown prices for every store. With this function, from its headquarters in Shanghai Williamson-Dickie China can instruct each store in a timely manner on price changes and merchandise transfers between stores, thereby preventing lost sales opportunities, stockouts and overstocks. In addition, because it enables multifaceted analyses using sales performance data, it can be used to formulate the next period's sales plans, identify the causes of poor sales at under-performing stores, and enhance merchandise selection at each store.

Pastel Plus can now be used throughout China as it offers (simplified) Chinese language support, and a function for language conversion between Chinese and Japanese. By enabling the language being displayed on the screen to shift according to the user's preference, both Chinese and Japanese staff can use the same system, enabling a unified flow of operations, a grasp of store operations, and an improved governance of store management.

It also provides detailed support for all types of local rules and regulations, including, of course, for local currency transactions and tax regulations, as well as for local Chinese business practices, which place an emphasis on cash-on-delivery.